Former White House strategist Steve Bannon thinks the Time’s Up movement is destined to clash with a right-wing populist insurgency, starting with the midterm elections this fall.

In a speech Tuesday an event hosted by the Swiss magazine Die Weltwoche in Zurich, the former Breitbart News executive chairman and Donald Trump adviser argued that a movement to fight sexual harassment and misconduct will eventually find itself fighting directly with the conservative populism he’s long espoused.

“You’re starting to see an empowered, grassroots on the left,” he said. “It is a movement that, I think, focuses on the power dynamics in society and asks deep and searching questions, questions that are going to have to be answered.”

“Time will tell, but I will tell you that in every country, starting with the United States, and starting in the midterm elections of 2018, these two forces are going to collide, and we’re going to see who wins and who loses,” he added.

Bannon has often argued that various political movements, including Islamic fundamentalism and right-wing populism, were historic forces fated to clash climactically, and he’s previously criticized the Time’s Up movement as well. After former talk-show host Oprah Winfrey delivered a powerful speech at the Golden Globes in January, Bannon argued that Time’s Up was “even more powerful than populism” and called it “anti-patriarchy.”

In his speech Tuesday, which was given to a sold-out crowd of 1,500 people according to organizers, he argued that Time’s Up would be revolutionary.

The nationalist movement that Bannon has championed is akin to the American Revolution, he said, because it pits an “imperial power” against the “colonial people.” By contrast, he said, the Time’s Up movement was similar to the French Revolution, which he categorized as “a complete turning upside down of society and the structure of society.”

The speech came just two months after a spectacular downfall for a figure who had once appeared on the cusp of establishing a movement that threatened to upend the mainstream Republican party.

Bannon, who served as CEO of Trump’s campaign during its last few months, chairman of Breitbart News, and chief White House strategist, had already become a target of the Republican leadership after he staunchly backed controversial Alabama Senate candidate Roy Moore, even after sexual misconduct allegations were made against him during his campaign for office last year.

But he then found himself pushed even further to the fringe of conservative politics after Trump publicly broke with him following the publication of Fire and Fury, a salacious book on the inner workings of the West Wing. In that book, Bannon was quoted as questioning Trump’s ability to follow complex topics, and criticized an infamous Trump Tower meeting with a Russian attorney as “treasonous” and “unpatriotic,” speculating that Donald Trump Jr. had set up the meeting, which he called treasonous.

Rebekah Mercer, who was Bannon’s biggest financial backer and owns a stake in Breitbart News, followed suit, and Bannon soon stepped down as chairman of Breitbart.

During his speech to a packed hall in Zurich, however, Bannon tread carefully around his public falling out with Trump and Mercer, as well as his resignation from Breitbart News, choosing instead to heap praise on the U.S. president throughout his hour-long appearance.

When the moderator of the event, Die Weltwoche editor Roger Köppel, asked Bannon whether he was even on speaking terms with the U.S. President, he replied: “I’m on listening terms.” 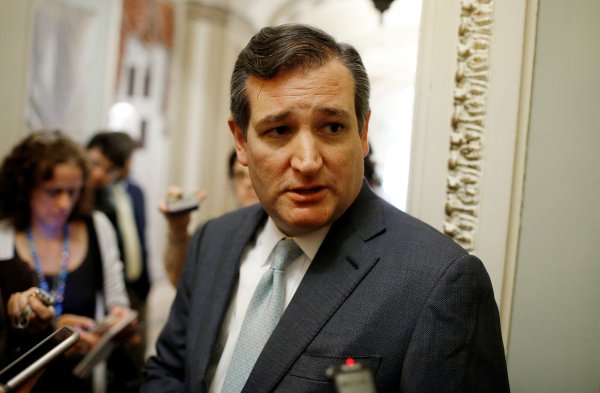 What the Texas Primary Results Could Reveal About Immigration in 2018 Elections
Next Up: Editor's Pick