Update: Henson told People later on Sunday night that her comments to Seacrest were misconstrued. “I did it to keep his chin up. It’s an awkward position to be in. He’s been cleared but anyone can say anything,” she said. She added that she “absolutely” supports Seacrest.

The red carpet has been a charged stage in 2018, beginning with the demonstrations orchestrated by Time’s Up at January’s Golden Globes—and the 90th Academy Awards were no exception. There was much debate leading up to the event around E!’s decision to maintain Ryan Seacrest as a red carpet interviewer despite recent allegations of sexual harassment leveled against him by his former stylist. (Seacrest has denied the allegations.) Seacrest’s interviews were mostly uneventful until he stood before Taraji P. Henson, who was there Sunday night to present the performance of Mary J. Blige’s Oscar-nominated original song for Mudbound.

When asking Henson about Blige, the Empire actor responded, “You know what, the universe has a way of taking care of good people. You know what I mean?” She then flashed him a mischievous smile. “I agree,” he responded.

A number of viewers took to Twitter to suggest that Henson’s remark was not just in reference to Blige, but a way of subtly calling out Seacrest to his face.

Over on ABC, right after Henson’s interview with Seacrest, interviewer Wendi McClendon-Covey asked her how she was doing and she responded, “I’m great now that I’m in your company.”

As time ran out on the red carpet, it seemed unlikely that anyone would address the allegations to Seacrest directly. But if these interpretations of Henson’s comments are on point, it looks like that knowing grin may be the closest thing to a confrontation as we’ll see Sunday night. 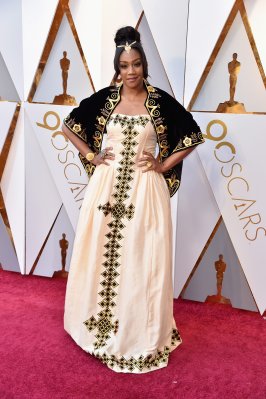 The Internet Is Loving Tiffany Haddish's Look on the Oscars Red Carpet
Next Up: Editor's Pick