Who Is Eva Marie Saint? Reintroducing the 1955 Oscar Winner

There were plenty of familiar faces among the presenters at the 90th Academy Awards Sunday night, from Black Panther himself, Chadwick Boseman, to Mark Hamill and Gal Gadot. But one presenter may have been less recognizable to younger viewers, or those with only a passing interest in films of the 1950s and ‘60s.

Eva Marie Saint, who presented the award for Best Costume Design, has been on the Oscars stage before. The actor, now 93, made her movie debut in the 1954 Best Picture winner On the Waterfront. For her performance as Edie Doyle, the sister of a murdered dockworker, she won an Oscar for Best Supporting Actress. Frank Sinatra, who had won Best Supporting actor the previous year for From Here to Eternity, presented the award to Saint, who was nine months pregnant. Accepting the award, she joked, “I may have the baby right here,” before thanking “all the longshoremen” from the film.

Her next major role came in 1959, when Alfred Hitchcock cast her opposite Cary grant in North by Northwest. For the role, he had her cut her long blond hair and lower her voice to fit the role of femme fatale; the film’s critical success catapulted her further into stardom. She would go on to play opposite Paul Newman in Exodus, Montgomery Clift in Raintree County and Warren Beatty in All Fall Down.

She appeared onscreen with less frequency throughout the ‘80s and ‘90s, winning an Emmy for her role in the 1990 miniseries People Like Us. More recently, she appeared in Superman Returns (2006) as the superhero’s adoptive mother and the 2014 fantasy drama Winter’s Tale.

On Sunday night, Saint mentioned her husband, director and producer Jeffrey Hayden, to whom she was married for 65 years before he died in 2016. She also joked about her seniority on the stage: “I just realized something,” she announced. “I’m older than the Academy.” 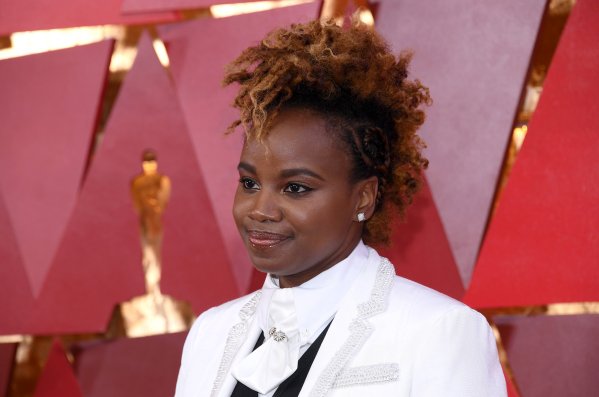 One of the Best Movies at the 2018 Oscars Was a One-Minute Walmart Commercial
Next Up: Editor's Pick