The Best, Worst and Most Surprising Moments of the 2018 Oscars

The 90th Academy Awards Sunday night couldn’t possibly match the exciting finish of last year’s ceremony. But in a night full of predictable wins — from Coco to Allison Janney to Gary Oldman — there were still some moments of suspense and spontaneity. From the highs, like Tiffany Haddish and Maya Rudolph’s banter, to the lows — which involved the use of hot dog cannons — we were reminded why it’s worth tuning in ever year.

Here are the moments we’ll remember, and the ones we can’t wait to forget, from the 2018 Oscars.

Most On Point Opening Monologue

Host Jimmy Kimmel came to talk about current events Sunday night. After an odd retro-style black and white opening segment and the first of many jokes about last year’s PricewaterhouseCoopers mix-up, Kimmel prioritized addressing pressing issues in Hollywood and beyond — particularly workplace sexual harassment — over jokes about the nominees in the front rows of the Dolby Theater (though he made some of those too).

“We can’t let bad behavior slide anymore. The world is watching us. We need to set an example. If we can work together to stop sexual harassment in the workplace, women will only have to deal with harassment all the time in every other place they go,” he joked, half-seriously. He encouraged viewers to listen to women speaking out about the #MeToo movement and encouraged people to join the students of Parkland, Fla., on their D.C. march to prevent gun violence. It may not have been the most impassioned delivery, but after speculation as to whether Time’s Up would even make an appearance at all Sunday night, Kimmel set the tone early on.

Two Oscar winners went beyond the usual thank you’s of publicists, moms, dads and directors to thank some four-legged and winged friends. The first, Best Makeup and Hairstyling winner Kazuhiro Tsuji, thanked Darkest Hour‘s Gary Oldman, of course, but also his cats. The second, Allison Janney, thanked “a cast and crew and bird that elevated my work.” Janney’s decision to bring I, Tonya screenwriter Steven Rogers instead of her avian costar really is one worth questioning.

Most Unnecessary Tribute to the Movies

About an hour into the broadcast, the show turned to a prepared movie montage celebrating 90 years of the Academy Awards. The clip wasn’t unenjoyable — it’s certainly pleasant to take a walk down memory lane when it’s set to the most stirring segment of the Love Actually soundtrack. But it was a strangely meta, untethered moment that seemed not to have its footing in anything in particular. Then again, Hollywood celebrating Hollywood on Oscar night is hardly unexpected.

Best Movie That Was Actually a Walmart Commercial

It was rather surprising, though most welcome, that one of the night’s most quietly boundary-breaking moments came in the form of a commercial for the biggest corporation in America. But Mudbound director Dee Rees’ one-minute ad had so much that the movies for so long have lacked: young black girls as the heroes and villains of a sci-fi narrative. Black lesbian parents relaxing on the couch in a scene of contented domesticity. Oh, and an Oscar-nominated female cinematographer.

Most Incongruous Win of the Night

On a night punctuated by statements about combating sexual harassment in Hollywood, many found it disappointing to see retired basketball star — and now Oscar winner — Kobe Bryant take the stage. Bryant, who won an Academy Award for Best Animated Short for the film “Dear Basketball,” was arrested in 2003 for sexual assault after he was accused of rape by a hotel employee. Criminal charges were ultimately dropped, but a civil case was settled out of court. Needless to say, many didn’t feel great about celebrating him Sunday night.

One of the 2017 Oscars’ most viral moments came when Kimmel waltzed a bunch of tourists through the Dolby Theatre, giving “Gary from Chicago” his primetime debut. It worked well enough last year, so apparently Kimmel, or the show’s producers, decided to try to create a similar moment during this year’s broadcast.

In this bit, Kimmel recruited a crew of A-listers, including Gal Gadot, Ansel Elgort and Emily Blunt, to surprise an unsuspecting audience at Grauman’s Chinese Theatre across the street — who thought they were there to see a sneak preview of A Wrinkle in Time — with red vines, hot dog cannons and a six-foot sub. It was nearly impossible to hear over the screaming crowd and see through the chaotic camerawork, and there was certainly no suitable replacement for Gary from Chicago.

Much credit goes to the Oscars producer who had the ingenious idea to pair Tiffany Haddish and Maya Rudolph at Sunday’s show — because the result was the funniest introduction of the night. The duo, onstage holding their many-inch heels in hand, traded jokes about the whiteness of the Oscars — both onstage and behind it —making people pay attention to the least-watched categories of the evening.

Natalie Portman sent a wave of conspiratorial chortles through the audience at January’s Golden Globes when she called out the “all male” nominees for Best Director. At the 2018 Oscars, Sandra Bullock and Emma Stone were there to continue to draw attention to women in Hollywood, although Sunday night, they were calling out their presence, rather than their absence. Bullock announced “the four men and one trailblazing woman,” Rachel Morrison, nominated for Best Cinematography. Stone, presenting Best Director, read the names of “these four men and Greta Gerwig.”

On a night when nearly every speech included references to winning a jet ski, no thanks to Jimmy Kimmel, the most rousing moment came during Frances McDormand’s acceptance of the Oscar for Leading Actress in Three Billboards Outside Ebbing, Missouri. After thanking her director, castmates and family, she asked every female nominee across all categories to stand — she made Meryl Streep do it first, knowing the rest would follow suit — declaring, “Look around, ladies and gentlemen, because we all have stories to tell and projects we need financed.” 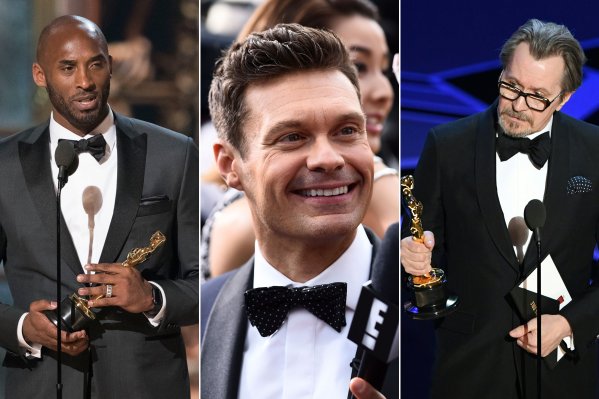 The Oscars Tried to Embrace Time’s Up. It Didn’t Really Work
Next Up: Editor's Pick