Daylight Saving Time Starts This Weekend. Here's What Losing An Hour of Sleep Really Does to Your Body

The start of Daylight Saving Time, when the clocks spring forward by an hour, is among the most hated days of the year. Aside from the obvious reason — losing an hour of sleep — research has shown that the time change, which this year falls on March 10, may contribute to everything from lost productivity to a heightened risk of heart attack and stroke.

How can resetting your clocks do all that? TIME asked Dr. Cathy Goldstein, an assistant professor of neurology at the University of Michigan School of Medicine Sleep Disorders Center, what really happens to your body when you lose an hour of sleep for Daylight Saving Time.

Your circadian rhythm is thrown off

Daylight Saving Time’s true impact goes beyond losing an hour of sleep, Goldstein says. Your circadian rhythm, an internal clock that “exists so that wakefulness is promoted during the day, and sleep is promoted at night,” Goldstein says, is also affected.

Thanks to circadian rhythms, the body begins secreting melatonin, a sleep-promoting hormone, around 9 p.m., with levels dropping way off by the next morning. Light exposure can moderate your circadian rhythm a bit, but the body more or less relies on consistent sleep and wakefulness cues — so when they’re altered, even by an hour, your sleep gets misaligned.

“You take somebody who’s very sleepy when they get up at 6 a.m., and then they get up at 6 a.m. during Daylight Saving Time, and for them that’s physiologically 5 a.m.,” Goldstein says. “That’s a big problem, because you’re waking up at a time when the circadian system is not yet promoting alertness. It’s still pushing for that sleepiness.”

Plus, you may lose sleep on both ends of your cycle, since your normal bedtime will feel earlier, potentially making it harder to fall asleep in the first place. Even worse, DST happens on a weekend, when many people stay up later and sleep in. Because of the cumulative effects, you lose more like two or three hours of sleep, and it could take up to a week to get back on a normal schedule, Goldstein says.

Research has shown that losing an hour of sleep may cause you to eat roughly 200 more calories the next day, primarily from fat- and carbohydrate-heavy foods. Exercise endurance also falters after a night of inadequate sleep, Goldstein says, so your workout will likely be sluggish. Work or school performance may also suffer, she adds, citing studies that have found an uptick in “cyberloafing” — or wasting time online — in the days after DST.

Many studies of shift workers, whose nighttime sleep is often disrupted, have also identified health problems associated with chronic sleep deprivation, including heightened risks of obesity, cardiovascular disease and even cancer. While one night of bad sleep certainly isn’t enough to cause these conditions, Goldstein says the findings highlight the importance of solid slumber.

Here’s how to minimize the impact

With a little planning, you can save yourself from the worst of the DST hangover.

Before the event occurs, Goldstein recommends going to bed and rising 15 minutes earlier than you normally would. Then, continue to shave off an additional 15 minutes each night leading up to the time change. That way, by the time Daylight Saving Time rolls around, you’ll be more or less acclimated to the adjusted time.

“To help you do that, I recommend getting lots of bright light in the early mornings, because that is what makes your internal clock earlier, and that will help you match better to Daylight Saving Time when the clock adjusts,” Goldstein says.

You should also use DST as inspiration to take stock of your regular sleep habits, Goldstein says. For example, most people could do a better job of keeping sleep and wake times consistent, even on weekends. (Goldstein recommends waking up at your normal time and taking a nap on weekend afternoons, if you need one.) Another common area for improvement is minimizing technology use within two hours of bedtime, Goldstein says. 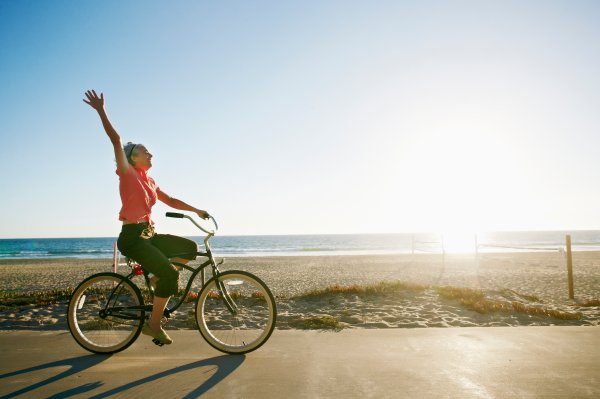 How Exercising Into Old Age Can Keep Your Immune System Young
Next Up: Editor's Pick