'It Is My Greatest Fear.' Superintendents Are Shutting Down School Districts Nationwide Over Shooting Threats

There was little in her training as an educator that prepared Piera Gravenor to make decisions in the middle of the night in response to school shooting threats.

But Gravenor — the superintendent of the Delsea Regional and Elk Township school districts in New Jersey — was woken up around 2:30 a.m. Thursday by a call from police. A teacher at a middle school in the neighboring Franklin Township School District had received a shooting threat via email. Franklin Township had already decided to shut down the district for the day.

What would happen, Gravenor wondered, if the threat were credible and a student brought a gun to that middle school, only to find it empty? What would happen if that student walked less than a mile to her district’s high school instead?

“You don’t learn any of this in graduate school, I can tell you that,” said Gravenor, who decided to cancel school across her districts on Thursday — something she had never done before because of a threat. A 10-year-old boy was later arrested and charged with making terroristic threats and causing false public alarm, according to Franklin Township police.

“My thought is just, I would always prefer to be criticized for overreacting than taking a chance,” Gravenor said. “I would rather be able to say, ‘What a wasted day and nothing happened and all my kids are safe.'”

Weeks after a gunman opened fire at a high school in Parkland, Florida on Feb. 14, killing 17 people, leaders of school districts nationwide are approaching copycat threats with an abundance of caution. They are often deciding that it’s better to cancel school across entire districts than take a risk.

The Poughkeepsie City School District in New York shut down on Wednesday and Thursday in response to a high school shooting threat on social media that police later concluded was “without merit.” The Central York School District in Pennsylvania canceled school for three days last week while police investigated threats made by text message and social media against middle and elementary schools in the district. The schools reopened on Monday after police determined a middle school student hoping to get out of class was responsible.

It’s a well-known problem that copycat threats — both credible and otherwise — can spike in the wake of a high-profile mass shooting. The superintendents who have had to respond to those threats in the past few weeks have thought consistently of their counterparts at Marjory Stoneman Douglas High School and Broward County Public Schools.

Brian Kress, superintendent of the Blackfoot School District in Idaho, said it’s that realization that scares him the most. “I will tell you, it keeps me up at night,” he said. “It is my greatest fear, and it is something that I reflect upon often.”

Kress shut down all of his district’s schools on Thursday while police continued to investigate a shooting threat at Blackfoot High School. A 14-year-old male student was arrested Wednesday, but police were still investigating rumors that other students were involved. “We have concluded the juvenile in custody did not have a weapon at school and at no time yesterday were students or staff in danger as it relates to this incident,” Blackfoot Police said in a statement Thursday.

Working with limited information in the midst of threat investigations, school administrators are trying to strike a difficult balance between protecting their students and avoiding disruptions to their education. “It’s a Catch-22. It’s a no-win situation,” Kress said. “We felt that if we only closed down one school and the threat was a viable threat, that threat could move on to a different school.”

In the case of the Marjory Stoneman Douglas shooting, law enforcement officials have faced scrutiny amid accusations that they ignored red flags or did not respond seriously enough to previous reports of the gunman’s disconcerting behavior. Mac Hardy, director of operations for the National Association of School Resource Officers, thinks that scrutiny has fueled the cautious response from other school districts in the past few weeks.

“It’s made everybody sit back and think, ‘We need to look at all communications that are coming in and take them all seriously and follow up as far as we humanly can,'” Hardy said. He added that he thinks the heightened awareness among school administrators and law enforcement officers is a good thing. “Let’s make sure we don’t stop in two weeks on following up on these types of incidents,” he said. 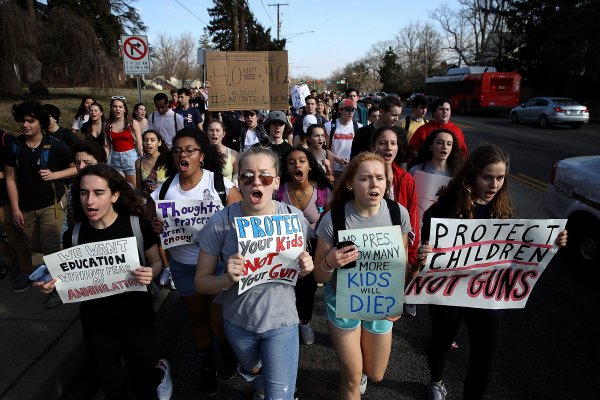 Students Are Walking Out Over School Shootings. Can Schools Punish Them?
Next Up: Editor's Pick