You Asked: Should I Use a Toilet Seat Cover?

Some people hover. Some build a nest of toilet paper. And some reach for those hard-to-keep-centered, always-getting-splashed-by-the-prematurely-auto-flushing-toilet seat covers. If you’re in the latter camp, you’ve probably wondered whether the extra effort is really protecting you from something. The answer is yes—though probably not the thing you’re worried about.

“In terms of preventing illness and transmission of infectious disease, there’s no real evidence that toilet-seat covers do that,” says Dr. William Schaffner, a professor of preventive medicine at Vanderbilt University School of Medicine.

Schaffner says he understands the intuitive appeal of covering a public toilet seat with paper before sitting down.

But toilet seat covers—as well as toilet paper—are porous, meaning they contain holes large enough for microscopic organisms to slip through. “If you’re using several layers, that may provide a little more protection,” says Philip Tierno, a professor of microbiology and pathology at the New York University School of Medicine. “But unless a toilet seat is overtly dirty, meaning there is liquid or particulate matter visible on the seat, it’s rare that you could catch something.”

Both he and Schaffner say there’s not much evidence that public toilet seats are rife with illness-causing germs. In fact, research shows that the average cell phone is coated with roughly ten times more bacteria than the average toilet seat. Keys, shoelaces, purses and many other everyday items also tend to be germ-ridden—at least compared to public toilet seats, most of which are cleaned regularly.

Even if a toilet seat were contaminated with the dreaded “fecal bacteria,” and that bacteria got onto your skin, it’s unlikely that something bad would happen to you. Schaffner explains that unless someone is ill, his or her fecal bacteria is probably harmless. Moreover, that bacteria would have to somehow make its way into your body—either through an open wound on your behind, or via your hands—to make you sick.

“This is why there’s so much emphasis placed on hand hygiene,” Schaffner says. If you wash your hands after using a public restroom (or a private one) and before eating, you’re probably in the clear.

Tierno emphasizes this point. “Hand-washing is the most important thing you can do to protect yourself,” he says, adding that many people don’t wash thoroughly enough to prevent illness. “Use soap, and sing happy birthday to yourself twice before rinsing,” he says.

MORE: Why You Should Never Squat Over the Toilet Seat

Using extra toilet paper or toilet seat covers also has an environmental cost: the added paper used to manufacturer these items and the additional water that may also be required to flush away and break down the liner or tissue.

On the other hand, there may be one reason to sit on the toilet, cover or not. There’s some evidence that women who hover may have slightly reduced urine output, which may lead to “abnormal” test results during gynecological exams.

Schaffner acknowledges there is an “ick-factor” associated with sitting on a public toilet seat. If the residue of someone else’s urine or feces or spit is on that seat, you probably don’t want that touching your body, regardless of whether it could make you sick.

If these are your concerns, “liners can provide assurance and a sense of comfort,” Schaffner says.

A final safeguard: when a toilet is flushed, any bacteria it contains can become briefly aerosolized, Tierno says, so stand as far away from the toilet as you can. Newer low-pressure toilets don’t throw up much of a “bloom,” he says. But older and powerful toilets can. “When you flush,” he says, “you should be prepared to leave.” 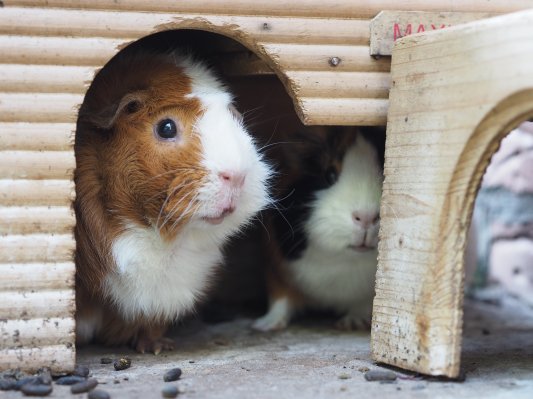 Guinea Pigs May Be Giving People Salmonella, the CDC Says
Next Up: Editor's Pick