Stoneman Douglas Student: How Photography Is Helping Me Cope With This Nightmare

Skipping school saved my life on Feb. 14, 2018. I planned to spend the day surrounded by love and warmth with my family and friends. We made the plans a month in advance. I was hoping for everything to go smoothly. My boyfriend and I had a scheduled spa day and dinner reservation later in the evening. At 2 in the afternoon, I entered the spa at a plaza that is walking distance away. An hour later, I walked out, as texts flooded my phone and friends and family frantically asked if I was okay.

The sirens roaring nearby caused a vast pit in my stomach to form. Police cruisers, ambulances and first-responders, racing towards my school, passed right in front of me. The sirens clogged my mind — everything a blur, everything in slow motion. Four minutes passed. Missed phone calls and messages accumulated on my phone, and then I received the one text that changed my entire world. The one text that managed to make my heart stop beating. “There was a shooting at Douglas.”

My mind could hardly fathom what those six words meant. I immediately broke down in tears. The unfathomable question of whether my friends were okay or not formed a type of fear I wouldn’t wish on my biggest enemy. My boyfriend pulled me to his car as my mother called me, telling me to come home right away. I was a hysterical mess.

When I arrived home, I hugged my mother as if I had never hugged her before. We then began to watch the local news, seeing live footage of my very own high school — a place where I spent more time than I did in my actual home.

Eventually, watching the news became a burden. It weighted my chest. I hardly slept that night. I tossed around in my bed, knowing that some of my friends were in the hospital, fighting for their lives. A few of my friends were missing. It would later be announced that they had passed.

The next day, every time I left out my front door, my camera was in my hand. I knew that as a photographer, carrying it would be the best thing for me. Documenting the beauty within this nightmare settled some type of peace in my soul. At the candle vigils to the two memorial grounds that stand at my local park and in front of my school, I found that beauty. There is some type of comfort that comes from something that is your passion, and for me, that is photography. To be able to take a photograph, immortalize that moment forever and share it with the world is truly powerful.

Through grief, loss and anger, it has been a blessing to be an artist. Photography has given me an outlet to release my emotions. From using the camera to editing the images on my laptop, it has all allowed me to process the nightmare I experienced on Valentine’s Day.

Despite attending too many funerals, despite the media invading my community, despite having to witness my friends experience post-traumatic stress, I have found light through the grace of art. I have been so fortunate to cope with my stress, grief and the nightmare I am living in through my camera’s lens.

Parrow is a senior at Marjory Stoneman Douglas High School in Parkland, Fla. Follow her on Twitter @longlivekcx. 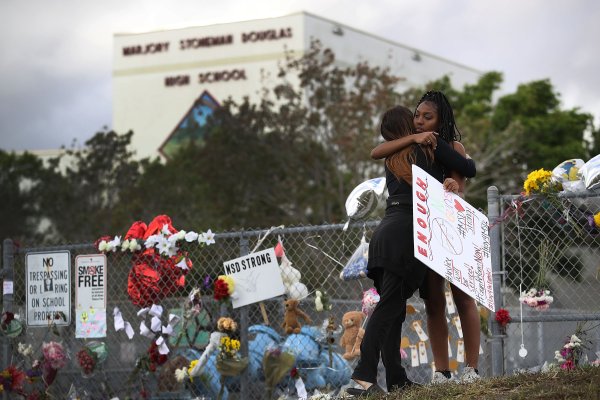 'I Just Want It to Be How It Was.' Florida Shooting Survivors Describe Their First Day Back at School
Next Up: Editor's Pick