Beyond Meat
By Mahita Gajanan

The buzziest tech product coming out of Silicon Valley is not another app or a new virtual reality experience. It’s a burger that contains no meat.

As many Americans attempt to reduce their meat consumption, startups like Impossible Foods and Beyond Meat are targeting restaurants and grocery stores with an approach to the burger that cuts out the cow, but still tastes like meat in an effort to curb the environmental impact of animal production. Funds have poured to the companies out of widespread concern over the 10 billion animals killed for food in the U.S. each year and cattle’s contribution to greenhouse gas emissions. Although investors are loving it, big beef is starting to fight back, claiming that plant-based burgers should not count as real meat.

The U.S. Cattleman’s Association, (USCA) which represents the cattle industry, filed a petition in February with the U.S. Department of Agriculture asking for specific definitions for terms like “beef” and “meat.” According to the USCA, items labeled with such words should “inform customers that the product is derived naturally from animals as opposed to alternative proteins such as plants and insects or artificially grown in a laboratory.”

But to Ethan Brown, the CEO of Beyond Meat, words like “meat” should have more to do with the food’s chemical composition than an animal origin.

“You don’t need an animal to create meat,” Brown said. “Meat is very understandable — it’s lipids, it’s trace minerals and it’s water. None of those have exclusive residence in the animal, so why use the animal to organize them?”

Real meat or not, the new burgers have attracted a significant following. Founded in 2011, Impossible Foods has raised about $275 million, with investments from prominent firms, including Horizon Ventures, Khosla Ventures and Temasek Holdings. Beyond Meat, launched in 2009, has raised about $72 million in total, with investments from meat producer Tyson Foods, former McDonald’s CEO Don Thompson’s Cleveland Avenue, LLC, and Twitter co-founders Evan Williams and Biz Stone. The actor Leonardo DiCaprio invested in Beyond Meat last year, while Bill Gates has provided funds for both companies.

What sets the burgers from Impossible Food and Beyond Meat apart from other veggie burgers, which have been commercially produced in the U.S. since 1982, is that they provide the mouth-feel of real meat minus any guilt over animal slaughter and the harm it causes to the environment. Both companies use food technology to replicate real meat, producing burgers that smell, sear and bleed as though they were made entirely of beef.

Beyond Meat’s burger, made from yeast extract, coconut oil and peas, appears to bleed due to the addition of beets. Brown said he developed the burger after nailing down how to source the makeup of animal products in plants. The Impossible Burger contains wheat, coconut oil and potatoes in its burger, and relies on a key ingredient called heme for its meaty feel and bloody look.

“That emotional connection to craveability and responsibility at the same time has been a very powerful way for consumers to demand the product,” said David Lee, Impossible Foods COO and CFO.

Plant-based and lab-grown meats are unlikely to make a huge dent in beef production right away. Americans are projected to eat more meat than ever in 2018, according to the USDA, which predicts a person on average will eat 222.2 pounds of red meat and poultry this year in a sharp upward trend after meat and poultry demand slumped between 2007 and 2014. Lab-grown meats, in which animal stem cells are used to create meat products, are expected to enter the market within the next three years.

The average customer trying out an Impossible or Beyond burger are meat eaters looking for food that is better for their bodies and for the planet. Beef production makes up 65% of livestock emissions, which total about 7.1 gigatonnes globally, according to United Nations Food and Agriculture Organization. Cultivating beef requires four times the land of dairy production, and uses seven times the resources needed to produce pork and poultry, according to the International Food Policy Research Institute. The World Health Organization linked red meat with potentially causing cancer and urged caution in consuming it in a 2015 study.

Hope Perri, a vegetarian who has tried the Impossible burger on a few different occasions, said it is one of the most convincing meat alternatives she has ever tried — to the point where even she was questioning herself. Accustomed in her meat-eating days to burgers being cooked all the way through, the pink hue of Impossible’s plant-based burger skewed a little too close to raw meat the first time Perri tried it. The next time she ordered it, she asked for the burger to be cooked for a longer time.

On the whole, Perri, 25, doesn’t miss eating meat. But having more plant-based meat options that approximate the juicy, greasy taste of beef burgers makes it easier for her to go out with friends and enjoy a meal, she said.

“Sometimes you just want what everyone else is having,” she said. “Some meat alternatives taste too healthy, but with the Impossible burger it tasted just like a treat to yourself.”

While Impossible Foods and Beyond Meats hold similar ideologies, the companies diverge in distribution approaches. Beyond Meat, which has 150 employees and is looking to add to its food science and engineering teams, has infiltrated the market by placing its burger patties right in the meat aisles of about 25,000 grocery store locations in the U.S., from Walmart to Whole Foods. By contrast, Impossible Foods, which employs 257 workers, has introduced people to its animal-free meat by way of restaurants and popular chefs.

After landing on the menu at celebrity chef David Chang’s Momofuku Nishi and Traci Des Jardins’ restaurant Jardinière in 2016, and at select Umami Burger locations the next year, Impossible Burgers are now available at more than 600 restaurants in the country and will debut in Asia this year. Des Jardins, who has concerns about how current food production harms the environment, said the Impossible Burger sells better than the beef burger she used to serve at Jardinière.

“Food needs of the growing population are going to make us think about things differently,” she said. “Hunger is a big issue. Environmental impact is a big issue. We need new ways to produce food.” 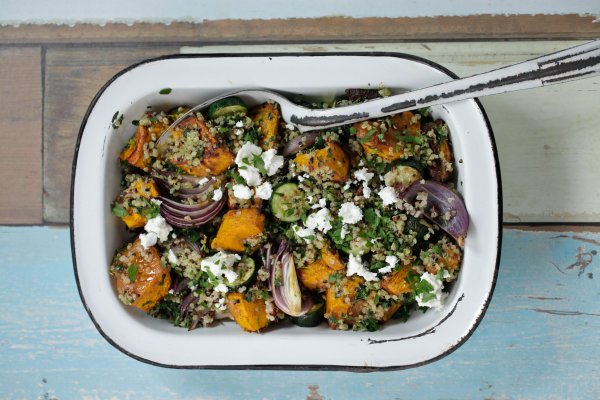