Winter Storm Riley Just Turned Into a Stronger Nor'easter Thanks to 'Bombogenesis.' Here's What That Is

The pleasant weather conditions experienced in the Northeast in recent weeks are over — and winter is back.

A massive storm called a nor’easter hit the East Coast early Friday, bringing heavy wind, rain, snow and coastal flooding. The intense storm was strengthened thanks to “bombgenesis,” a similar weather phenomenon experienced by the Northeast in January when a so-called “bomb cyclone” hurled forceful winds and snow amid freezing temperatures.

Winter Storm Riley’s bad weather caused many airlines like JetBlue, American, Delta and Southwest to cancel flights across the Northeast — allowing customers to rebook their flights free of charge. The National Weather Service has also warned of coastal flooding in eastern Massachusetts, and minor to moderate flooding on Long Island and coastal Connecticut.

With terms like “bombogenesis” and “nor’easter” used to described the impending storm, here’s what you need to know.

What is a ‘bombogenesis’?

A bombogenesis describes a rapidly developing storm that results from a drop in atmospheric pressure of at least 24 millibars. Such a weather pattern could occur during the storm Friday, according to The Weather Channel.

“This can happen when a cold air mass collides with a warm air mass, such as air over warm ocean waters,” the National Ocean Service says. That can then create a “bomb cyclone,” which the East Coast saw at the beginning of the year.

When bombogensis occurs, winds, rainfall and snow become stronger, and sometimes lightening can happen while it’s snowing, according to The Weather Channel. Bombogenesis often happens during a nor’easter — which also can happen as a result of differing air temperatures.

Occurring on the East Coast of North America typically between September and April, nor’easter storms are called that name due to winds coming from the northeast, according to the National Weather Service.

The storms include heavy rain or snow with heavy winds and massive waves that could result in flooding along the coast. The intense storms also are fueled by differing air temperatures over land and water, with cool and warm temperatures, respectively. These storms typically occur along the coast between Washington, D.C., and Boston.

Where will this storm take place?

The storm will span the East Coast from North Carolina to Maine, with heavily populated cities like New York, Washington, D.C., Philadelphia and Boston in the storm’s path.

Residents in those areas can expect heavy winds and several inches of rain. The Massachusetts coastline will likely see flooding, and coastlines along Connecticut and Long Island may experience it as well.

Winter Storm Riley also already brought record snowfalls to some parts of the U.S. — with Buffalo, N.Y. getting 8 inches of snow, the most ever recorded in the snowy city for March 2. Wyoming, a small town to the east of Buffalo, got 24 inches of snow in less than 24 hours, according to The Weather Channel.

New York City could get up to 3 inches of snow while other parts of New England and Pennsylvania may be blanketed with at least 6 inches of fresh powder by Friday evening, according to forecasts. 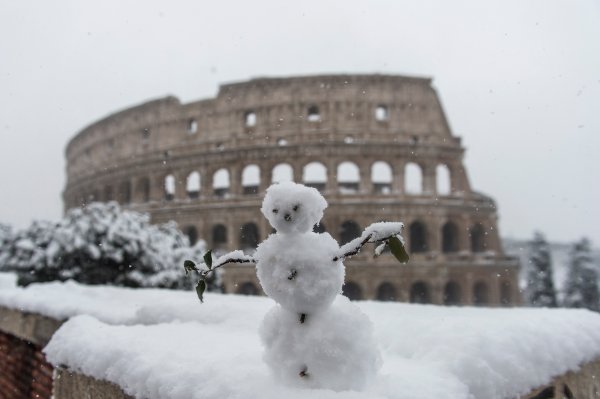 See Beautiful Drone Footage of the Rare Snowfall in Rome
Next Up: Editor's Pick