Press is the author of Stealing the Show: How Women are Revolutionizing Television, published in February by Atria.

When Murphy Brown premiered on network television in the fall of 1988, America was in the grips of a culture war. Attempting to reverse the hard-won gains of the civil rights, feminism and gay liberation movements in the ‘60s and ‘70s, the religious right targeted affirmative action, “indecent art” and abortion rights. If Soviet Communism was the big external threat to American greatness, the internal enemies were multiculturalism and liberalism, seen as decadent symptoms of a nation in decline. “Family values” became the great rallying cry for the right, as it is again today, with Vice President Mike Pence predicting the end to legal abortion “in our time.”

Brown became a flashpoint in this “war for the soul of America” (as conservative commentator Pat Buchanan characterized it). An unmarried television news journalist, the character was “living like a man and making no apologies for it whatsoever,” as series creator Diane English once put it. Wearing elegant designer suits like pret-a-porter armor, she channeled all her energy into exposing misuses of power. The storylines about corrupt politicians and sleazy captains of industry often directly echoed real-world headlines. Brown’s ruthless independence and sharp-tongued abrasiveness vaporized traditional notions of how a television heroine should behave. She personified the kind of career woman who sent the Moral Majority into convulsions.

Articles and television news magazines of the era relentlessly picked over the notion that working women couldn’t “have it all” — that female ambition would exact a terrible price on personal happiness. Murphy Brown reframed the conversation, dramatizing the aspirations of so many American women trying to reconcile the desire to have both a career and children. Diane English told me she was inspired by a visit to the office of a magazine editor friend who’d just become a mother: “She opened a drawer, and she had put bunting in the drawer, and she put the baby in the drawer. I thought: that is something Murphy would do.”

English decided that season three of the show would end with Murphy becoming pregnant by accident and then consciously deciding to raise the baby as a single mother. That provoked Republican Vice President Dan Quayle to single out the TV heroine as a bad role model for American womanhood. During the 1992 presidential campaign in which he and George H.W. Bush sought reelection, Quayle called out Murphy for “mocking the importance of fathers by bearing a child alone and calling it just another lifestyle choice.” And so a fictional character became the centerpiece of the election season. Depending on your political allegiance, Murphy was either a feminist role model or a representative of the liberal “cultural elite.”

This polarizing ploy to fire up the Republican Party’s conservative base ultimately failed: Bill Clinton won the 1992 election. English recalls Clinton inviting her to the inauguration with the quip, “All your fans helped get me elected.” And the controversy didn’t dent the show’s ratings, either: 70 million Americans watched Murphy give birth.

Researching the history of Murphy Brown while writing a book about female showrunners, I was amazed by how familiar all these battles felt. The cast of characters has changed, but we are once again living through a culture war that may yet prove to be more savage than the late ‘80s and early ‘90s version. It makes perfect sense that CBS has announced it is rebooting Murphy Brown.

Thirty years have passed, but America seems to be stuck in a feedback loop. Back then we had George H.W. Bush and Dan Quayle wringing their hands about family values and welfare queens. Now we have Donald Trump, who described his female opponent for the presidency as “such a nasty woman” and rode a wave of misogyny into the Oval Office. At his side is Pence, who has long sought to curtail reproductive rights; an evangelical who famously refuses to eat alone with any woman other than his wife, he might consider The Handmaid’s Tale a near-future utopia.

The day after the Murphy Brown reboot was announced, Republican Senate candidate Courtland Sykes released a public statement proclaiming that “I don’t want [my daughters] to grow up into career-obsessed banshees who forego home life and children and the happiness of family to become nail-biting manophobic hell-bent feminist she-devils.” Sykes could have been talking about Murphy, or about any of the many strong, thorny female characters who have flourished on television in recent years. Shows like Crazy Ex-Girlfriend, Insecure, SMILF, Broad City, Queen Sugar, Transparent, Grey’s Anatomy, The Mindy Project and Orange is the New Black overflow with complex, prickly depictions of modern female identity. Characters like Girls’ Hannah Horvath and SMILF’s Bridgette Bird — both of whom, like Murphy, embrace accidental single motherhood — embody so much that is horrifying to Trump supporters: comfort with their sexuality, unconcern with male approval.

Diane English sees Murphy Brown as part of a continuum: “There was a chain that started with Marlo Thomas on That Girl, which then begat The Mary Tyler Moore Show, and then we were the next link.” Today’s small screens teem with the daughters of Murphy: feisty, fearless and unabashedly feminist. But it’s happening in the real world too, from #MeToo’s mass reckoning with sexual assault and toxic workplaces to the hordes of fired-up women running for office in record-breaking numbers this year. How apt that Murphy Brown should return now for a victory lap, with a new lease on her symbolic life. 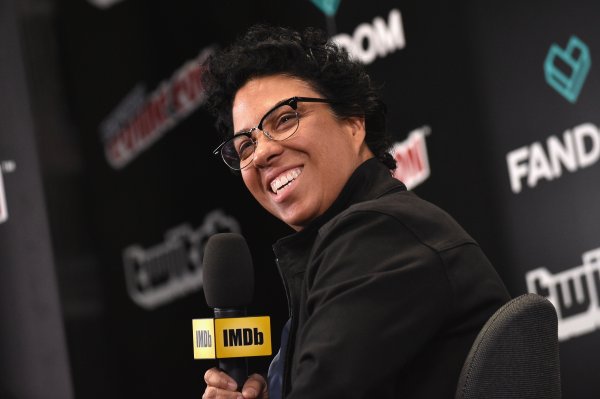 Director Angela Robinson: They Don’t Want Us Here. But Now They Need Us
Next Up: Editor's Pick