Will the Country Be Okay After President Trump? 'We’ll Have to Wait and See,' Says Omarosa

Director of Communications for the White House Public Liaison Office Omarosa Manigault during the daily press briefing at the White House in Washington, DC on Oct. 27, 2017.
Drew Angerer—Getty Images
By Casey Quackenbush

Former White House staffer Omarosa Manigault Newman guest starred on The Late Show with Stephen Colbert Wednesday, where the host asked her about comments she made about President Donald Trump while in the Celebrity Big Brother House.

Omarosa was filmed on Celebrity Big Brother telling housemate and TV personality Ross Matthews that the U.S. under President Trump will “not be okay.” Colbert asked her about the remark, and she clarified that the comment was “part of a bigger discussion” about immigration.

“I believe that the immigration debate will continue, and it’s very difficult and complicated subject,” said Omarosa, who is the former director of communications for the White House Office of Public Liaisons. “And I don’t believe that it can be resolved simply, and that was a part of the discussion, and that’s why I was a bit emotional.”

She added: “We have an opportunity to make it okay, and I don’t want 15 seconds on a reality show to encapsulate such a serious topic.”

Colbert continued to press her about the comment, asking directly, “Is everything going to be okay under Donald Trump?”

“We’ll have to wait and see,” she responded. 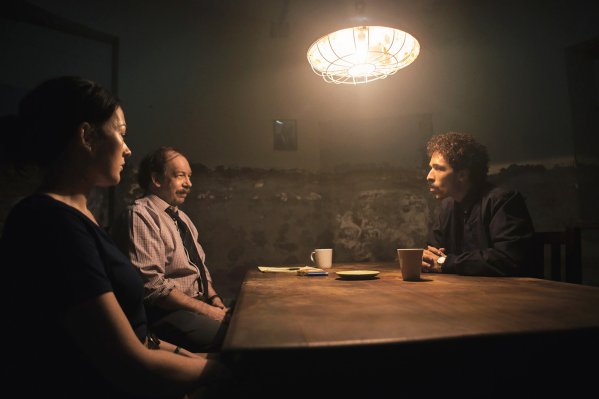 The Looming Tower Tells a Darkly Ironic Story About the Pre-9/11 Years
Next Up: Editor's Pick