'I Just Want It to Be How It Was.' Florida Shooting Survivors Describe Their First Day Back at School

Carly Novell woke up early Wednesday in a panic, gasping for air in her Parkland, Fla. bedroom as her mind flashed back to the life-altering day a gunman stormed her high school and killed 17 people.

The 17-year-old student journalist had pangs of fear and anxiety as she prepared to walk back into Marjory Stoneman Douglas High School later that morning for the first day of class since the deadliest school shooting to unfold in America in five years.

But shortly before 8 a.m., Novell, just like more than 3,000 of her classmates, put on a brave face and found herself at the front of the school, where flowers and memorials lined the fences, comfort animals stood at the ready, and a human barrier made up of heavily armed police officers and neighbors cheered them on with free carnations and hand-crafted motivational posters.

“Everyone was united,” said Novell, who survived the Feb. 14 shooting by hiding in a closet inside the school’s student newspaper office with about 20 other classmates. “We’re all thankful to be alive.”

About 95 % of the student body showed up for school Wednesday, according to Broward County Schools Superintendent Robert Runcie, who said only about 170 students were absent. “Today was a major milestone for us,” Runcie said at a news conference. “We took a major step in the recovery process.”

The return was emotional and surreal for some students and empowering to others. “I just thought, ‘How am I back to this place where I hid? Where my classmates were killed?” Novell told TIME. “It’s just crazy to think about.”

Novell said the “wall of police” and supporters at the school were both comforting and overwhelming. “We’re trying to go back to normal,” she said. “I don’t think that there is a normal anymore because 17 people died here. The police, that doesn’t feel normal. Passing the school is heart-wrenching. Being here the whole day, it’s heavy. I just want it to be how it was.”

Carly Novell survived the Feb. 14 shooting at Marjory Stoneman Douglas High School in Parkland, Fla. by hiding in this closet, inside the school’s student newspaper office, with about 20 other classmates
Photo courtesy Carly Novell

For Taylor Morales, an 18-year-old senior who watched the shooter pass by her classroom before he opened fire, the long line of law enforcement officers, which stretched from the crosswalk all the way to the front of the school, was calming.

“I was nervous about going in until I saw the amount of security,” she said. “It was just lines and lines of police officers, just standing there, and you had to walk next to them as you went into the school.”

Next to the police officers were people in the neighborhood handing out cards and gifts, Morales said. “I got cards from little elementary school students. I got little hearts and stuff. It was an overwhelming amount of support but in the best way,” she said.

Inside the classrooms, teachers were not teaching from the lesson books just yet. Instead, students were given time to heal. Grief counselors were stationed in every classroom and therapy dogs could be summoned at any time. When a student would suddenly break down in tears, the entire class would rush to their side, Morales said. Some students left school that day feeling more encouraged than pained.

“I felt nervous and I felt like my emotions were going to be too much for me to handle, but instead it just ended up making me stronger. I felt stronger than I had in days,” said Morales, a member of the school’s color guard. 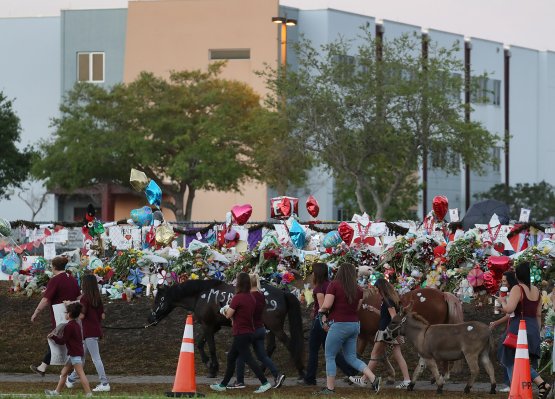 'How Many More Do I Have to Lose?' Read This Heartbreaking Poem From a Florida School Shooting Survivor
Next Up: Editor's Pick