In his suite at the Crown Plaza Hotel, Republican Presidential contender Senator John McCain hugs his daughter Meghan McCain, with his wife Cindy McCain behind them, on Jan. 8, 2008 in Nashua, N.H.
David Hume Kennerly—Getty Images
By Sarah Gray

Meghan McCain and Cindy McCAin appeared together Wednesday on The View, where Meghan McCain is a host, to discuss Trump’s attack on John McCain during the Conservative Political Action Conference, or CPAC, last week. During his CPAC speech, Trump, without mentioning McCain by name, referred to the longtime senator’s dramatic thumbs-down vote that ended the prospects for Republicans to repeal Obamacare last year.

Trump has a history of attacking the elder McCain dating back to the 2016 election. Following a report in Axios that Trump was mocking McCain behind closed doors, Meghan McCain tweeted her frustration. Trump then called Meghan McCain and the two had a “very nice” conversation, she said.

“I don’t believe he would go there again,” Meghan McCain told Politico earlier this month, referring to Trump attacking her father. “I don’t think at this point in his administration it would be beneficial to him in any way.”

But after Trump’s CPAC dig, Meghan McCain said on The View that she felt “naive” to have believed Trump.

“I had a really nice conversation with him and Melania [Trump] and I really was under the impression that this sort of fight between our families, and between him and my father especially, at this particular moment would end,” she said.

“I understand the argument,” Meghan McCain continued. “He’s talking about policy and that’s the attack but its still incredibly hurtful especially after I’ve had this conversation with him on the phone to have this moment of booing at CPAC, which is supposed to be the mothership of conservatism and the Republican Party, and to sort of see booing at this specific moment in time is incredibly hurtful.”

Cindy McCain also provided an update on her husband’s help, amid chemotherapy and radiation treatment he is undergoing to fight glioblastoma. She also called for more “togetherness.”

“More importantly, for my own feeling, we need more compassion,” Cindy McCain said. “We need more empathy. We need more togetherness… we don’t need more bullying and I’m tired of it.”

Prior to their comments on The View, Meghan McCain appeared on Watch What Happens Live With Andy Cohen, where she said she was “disappointed” in Trump for attacking her father. 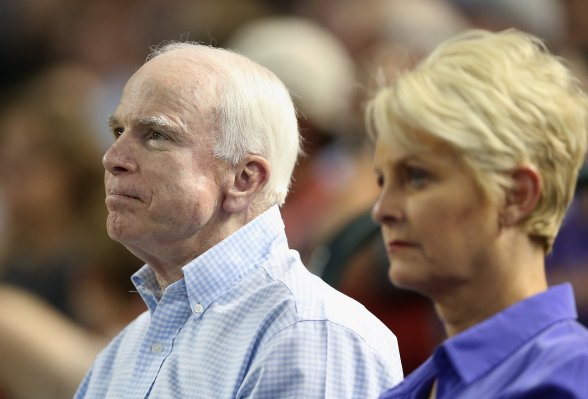 McCain, Ill With Brain Cancer, Urges Allies to "Never Give Up."
Next Up: Editor's Pick