Delta Will Never, Ever Leave Georgia. Here's Why

Georgia politicians angered by Delta Air Lines Inc.’s decision to drop its relationship with the National Rifle Association stalled a bill to scrap state taxes on jet fuel, legislation that would give the carrier a roughly $50 million break. The culture-war skirmish over guns on Monday, made worse by a four-way Republican scramble for the governor’s mansion, quickly morphed into a full-blown social media kerfuffle as other states and cities sought to lure the company away from Atlanta.

… then Virginia threw its hat in the ring …

Delta declined to comment immediately on the matter. Nevertheless, there are many reasons why a global company with 85,000 employees wouldn’t pack up its headquarters over $50 million. Here are a few of them.

Delta virtually “owns” the world’s busiest airport. Sure, the city is technically the landlord, but nothing of much import happens at Hartsfield without Delta’s say-so. Part of this influence derives from location, seeing as it’s headquartered right next to the runways. Another source of power is the estimated $71 billion in annual economic impact that Georgia enjoys from Hartsfield, which claims to be the state’s largest employer. Moreover, less than two years ago, Delta signed a 20-year lease to stay in Atlanta, its home for the past 77 years.

Delta officials are routinely quick to praise the cash generation at its largest hub. One reason for this profitability, aside from the dizzying amount of connections, is the control that Hartsfield’s largest tenant exerts from its south Atlanta redoubt. One example: Every few years, someone in Georgia floats the idea of establishing a second airport in the northern suburbs, where much of the area’s growth has come since the early 1990s. Every few years, these proposals are dealt a quick death.

Their planes may travel the world each day, but airlines are basically couch potatoes. In 2010, JetBlue Airways Corp. dangled the prospect of leaving New York, triggering excitement among Florida officials, given the carrier’s sizable operations in Fort Lauderdale and training campus in Orlando. (“It’s the top dogs from New York and Florida battling it out for JetBlue’s heart (and HQ)!” the airline wrote on a corporate blog.)

After a few months of flirtation, JetBlue decided to pack up and move—from southeastern Queens in New York City to northwestern Queens, settling into a trendy high-rise across from Manhattan. The change in JetBlue’s proximity to John F. Kennedy International Airport? About 10 miles. Likewise, in 2010, United Continental Holdings Inc. moved its offices 26 miles east of O’Hare International Airport, to a downtown Chicago skyscraper.

There’s one notable exception to this rule, but you have to go way back to find it. American Airlines Group Inc. ditched New York for Texas in 1978, lured by local incentives worth many times more than the $50 million in tax relief Delta might lose. (Yes, as a tiny carrier, Spirit Airlines Inc. moved from Detroit to South Florida in the 1990s.)

They matter a lot. Airlines stick close to their profit centers, just like a pit boss watching the blackjack tables. Consider American and Dallas-Fort Worth, United in Chicago, Spirit in Fort Lauderdale, JetBlue in New York or Alaska Air Group Inc. in Seattle. In the airline industry, the egg definitely comes first. Financial opportunities don’t spring up because an airline chose a particular city for its headquarters; it’s usually the other way around. By definition, the largest hubs also employ the most people and argue for a carrier’s management to be close.

So, as a general proposition, if Delta Chief Executive Officer Ed Bastian, a native New Yorker, ever decided that the Big Apple is a better corporate fit than the Peach State, his shareholders might give him a one-way ticket back to Poughkeepsie 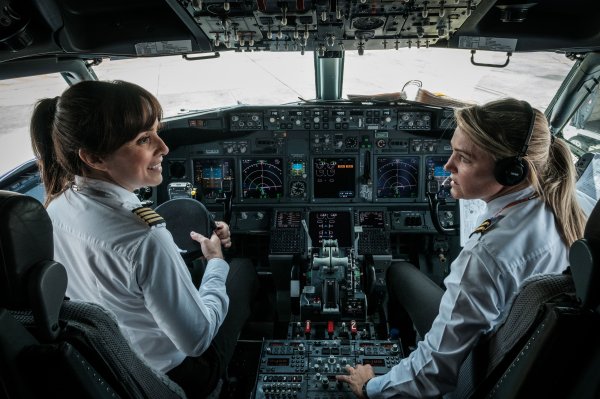 Airlines Are Making Tons of Money. Pilots Want Their Pensions
Next Up: Editor's Pick