'I Was Tired of Reading the Hate.' Olympic Bobsledder Deletes Selfie With Ivanka Trump

Ivanka Trump poses for a selfie with Lauren Gibbs as they attend the 4-man Boblseigh on day sixteen of the PyeongChang 2018 Winter Olympic Games at Olympic Sliding Centre on February 25, 2018 in Pyeongchang-gun, South Korea.
Andreas Rentz—Getty Images
By Raisa Bruner

Olympic bobsledder Lauren Gibbs won a silver medal for America at the 2018 Winter Olympics with Elana Meyers Taylor. But she’s at the center of a controversy of a non-athletic nature now, after she posted a selfie with Ivanka Trump and Sarah Sanders on social media — and received extensive pushback to her choice of image.

The photo in question was snapped at the finals of the four-man bobsled competition in PyeongChang, when Gibbs happened to be in the same place at the same time as Trump, who was in South Korea to represent the U.S. at the Closing Ceremony. (White House Press Secretary Sarah Sanders also was in the mix.)

Gibbs shared the picture online with a bipartisan message: “It’s important that we don’t have to agree on everything to get along, be civil to each other and enjoy each other’s company,” she wrote in a caption. Her selfie rubbed many fans the wrong way, however — so much so that she ultimately took the image down.

“I deleted (by choice) the photo because I was tired of reading the hate being thrown back and forth,” she said on Twitter by way of explanation. “Whether you hate me for posting or hate me for taking it down… you are the same… hate from either side is hate.”

Gibbs was on something of a selfie roll at this Olympics, sharing photos with popular figure skater Adam Rippon and freestyle skier Gus Kenworthy (both outspoken opponents of some members of the Trump administration.) 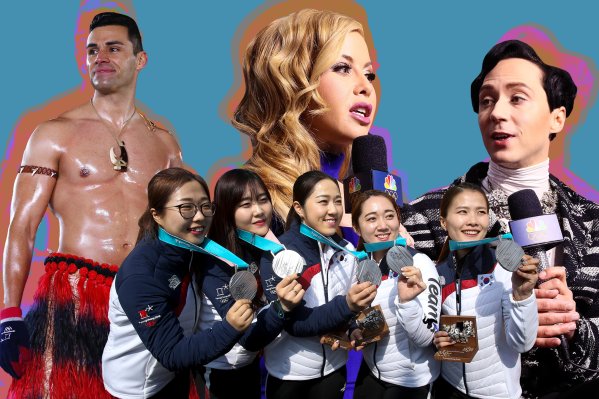 Ranking the Best Memes of the 2018 Winter Olympics
Next Up: Editor's Pick