I Am a School Shooting Survivor. This Is the First Time I’ve Had Hope in 25 Years

Ideas
By Devorah Heitner
Heitner, PhD, is the author of Screenwise: Helping Kids Thrive and Survive in Their Digital World.

In December, 1992, I was 17 years old. I remember vividly the experience of hiding from an active shooter on campus at Simon’s Rock College in Great Barrington, Mass. It was the longest hour of my life. We hid in my friend’s bedroom, where a few of us had gathered to study for finals. We hunched down below the windows and barricaded the door and waited — angry and terrified. My friend, Galen Gibson, and our professor, Ñacuñán Saez, were murdered.

The shooter had enough ammunition to kill every one of the 300 students at our small liberal arts college, a haven for kids who needed an early exit from high school. Most of us were saved by his gun jamming.

But this is not about me. This is about hope — and maybe, finally, a chance for change.

By now you’ve heard of Emma Gonzalez, a remarkable young woman who has helped light the spark of a movement that I hope will deliver lasting change to how we prevent school shootings. A student of Marjory Stoneman Douglas High School in Parkland, Florida, she and her classmates are standing up to the gun lobby, the NRA and the politicians who support them.

She led a crowd at a rally in the forceful incantation, “We call B.S.!”

A mixture of grief and anger in her voice, she somehow spoke with a clarity we haven’t seen on this issue. It felt like a turning point in U.S. history.

At least I hope it is.

After I survived the shooting, I withdrew into my trauma. Meanwhile, Gregory Gibson, the father of our murdered classmate, has worked tirelessly alongside many others to create change. But I just wept at the grave of my friend and listened to other students in my dormitory cry themselves to sleep in the cold nights after the murders.

I am ashamed of my inaction for the past 25 years.

Sure, I was just a 17-year-old kid. Life was normal, and then suddenly it wasn’t. But every shooting makes me think of my incredible, beautiful, brilliant friend Galen.

My heart breaks again and again when I read about the traumatized survivors of mass shootings at Columbine and Virginia Tech and Umpqua and Stoneman Douglas. When I see people struggling to pay for long-term care costs and raising money to pay for their injuries and rehab, I can’t believe we as a society are willing to accept these losses in the name of the Second Amendment. Our policies have so little empathy that mass shooting survivors, incapacitated by devastating injuries, can be left to fundraise for their own recovery. We guarantee the “protection” of guns, but not the protection of health care.

People are starting to question why — not just on social media, but straight to the seats of power.

In a listening session at the White House, Stoneman Douglas student Sam Zeif asked our President, “How is it that easy to buy this type of weapon? How did we not stop this after Columbine? After Sandy Hook?”

At a town hall later that evening broadcast by CNN, a student survivor from Stoneman Douglas, Cameron Kasky, challenged Florida Senator Marco Rubio to change: “Can you tell me right now that you will not accept a single donation from the NRA in the future?”

Emma, Sam, Cameron — they and the other survivors are now part of a club that no one wants to join. But when I watch these survivors come together, I feel hopeful.

The Trauma Doesn’t Go Away

I wish I could tell these young people that the trauma goes away. But I see how 25 years later, many of the friends I was with that night are still sad and traumatized again when each December rolls around — and with every milestone in our lives. Graduating. Starting a first job. Having a baby. At every step, you know that your friends were robbed of possibility.

The Simon’s Rock killer says that if he hadn’t been able to get a gun so easily, he wouldn’t have been able to do what he did. If there is any chance that making it harder to get guns could have kept Galen Gibson and Ñacuñán Saez alive in 1992, how can we not fight for that? If it could have spared the survivors their physical injuries and emotional pain, how can we not speak up for that?

My son, who just turned nine, doesn’t know my story. Not yet. He was four when the Sandy Hook massacre happened, and all I wanted was for him not to be part of the the assembly where the kids at his Pre-K–8 school wrote cards for the people of Newtown. I couldn’t imagine that there was a “right” way to tell a 4-year-old about a “bad man” coming into a school and shooting children. The day after the Parkland shooting, a mother in Ohio got news that her child was in a school on lockdown. By her description in a Facebook post, she found herself on the floor, dizzy and disoriented. Reading her account gave me vertigo.

A New Narrative from a New Generation

To Emma Gonzalez, Sam Zeif, Cameron Kasky and the Stoneman Douglas students standing up with them:

Don’t listen when adults tell you something can’t change. Even though supposedly “nothing has changed” and it is still way too easy to get guns, a lot of other things have changed. One example: In the early ‘90s, when I attended Simon’s Rock, it seemed like everyone smoked. But 25 years later, I can’t remember the last time I’ve seen someone smoking a cigarette. Another example: My kid is confident and comfortable with using “they” as a pronoun for the people in his life who have non-binary genders. Change happens.

You are right to call B.S. on the idea that nothing can be done.

You have inspired me. As a mother, as an educator, as someone who is fundamentally optimistic about the ways young people can create change, I am excited to see what you will do.

You are part of a continuum of young activists that includes the Dreamers and the Movement for Black Lives. Your generation has the savvy and the tools and the motivation. Rise up. Fight back. Show up — whether it’s in Tallahassee, in D.C. or on social media. Channel your grief and frustration and rage into action. This is going to be a long struggle and the trauma of your losses may overwhelm you at times. Stay strong. Take care of each other. Love each other. We are listening. We are here with you. 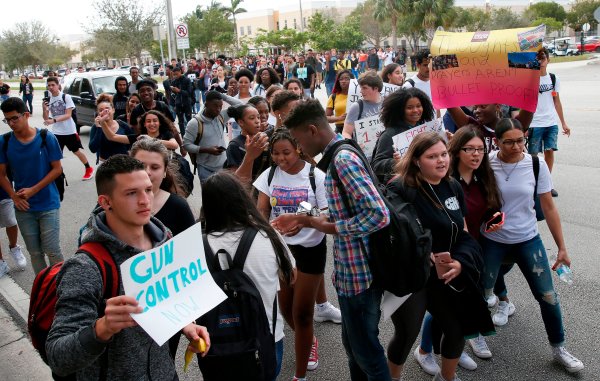 In the Fight for Gun Control, Children Are the Real Grown-Ups
Next Up: Editor's Pick