Ranking the Best Memes of the 2018 Winter Olympics

The 2018 Winter Olympics in PyeongChang, South Korea have had no shortage of noteworthy moments, from the American women’s hockey team finally defeating their longtime rivals from Canada to win gold to the sensual choreography that not only netted Tessa Virtue and Scott Moir a gold medal, but had the whole word shipping a romance for the ice dancing pair. However, it won’t be just the medals awarded to athletes and displays of nationalism that will be immortalized in Olympic history following the Winter games in PyeongChang — thanks to the Internet, viral moments will live forever in our hearts and minds. With that in mind, we’ve taken the liberty — nay, the responsibility and the honor — of awarding our own Olympic medal rankings to the most noteworthy and meme-able moments of the 2018 Winter Olympics. Let the games begin.

Pita Taufatoufa may have finished 114th in his program for cross-country skiing at the Winter Games, but when it came to fan love, the Tongan athlete took home top honors. Taufatoufua, who became a favorite of Olympics enthusiasts everywhere when he made a shirtless and well-oiled debut at the 2016 Summer Games in Rio as the flag bearer for Tonga, defied convention this year by becoming one of the rare athletes who compete in both the Winter and Summer Olympics, swapping out taekwondo for cross-country skiing, a sport he picked up less than a year ago. Much to the delight of everyone, Taufatoufa appeared shirtless once again as the flag bearer for Tonga during the Winter Games opening and closing ceremonies, a true feat when you consider how much more frigid the temperatures were in PyeongChang than Rio.

Taufatoufa’s willingness to bare his chest for his country (and his many, many Olympics fans) is a selfless and thoughtful feat that should be celebrated with an honor of the highest order.

In addition to being an impressive figure skater, Alex Kang-chan Kam is also a master of the Internet, something he splashily confirmed when he effectively made himself into a viral meme and Internet sensation (making it to the front page of Reddit, check it) by removing a pair of sunglasses adorned with the Olympic rings on it only to reveal that he was wearing another mirrored pair of shades beneath the first. If the move seemed calculated, that’s because it probably was — Kam took to Reddit to thank the Internet for their support of his viral moment, which he joked, “mean more to me than Olympic gold medals on this blessed day.”

South Korea’s women’s curling team is nicknamed the “Garlic Girls,” because their main players come from the Uiseong region, known for being a major garlic producer in Korea. Now, however, Uiseong will have another claim to fame: being the birthplace of Kim Eun-jung, the stoic skip (a sort of team captain) of the Garlic Girls, who won a silver in the 2018 Winter Games, the first medal that their country has ever received in the Olympics for curling. Kim Eun-jung’s game face during the competitions— a sort of cross between a somber poker face and a “take no prisoners” stare down of concentration, intensified by her trademark spectacles — quickly became a favorite talking point for the web.

Kim Eun-jung and the Garlic Girls may have lost the gold medal to Sweden, but when it comes to serious-as-hell game faces, she’s our golden girl for life.

This Show-stealing Kid Licking a Camera

When you’re at the Winter Games with the likes of Tara Lipinski and Johnny Weir for on-air talent, it takes a lot to steal the spotlight, but a young Olympic fan managed to do just that by attempting to lick a video camera that captured his hilarious pursuit in all its glory.

While this precocious kid wasn’t actually successful in licking the camera, we’re giving him extra points for the confidence and acumen it took to even attempt the feat.

Tara Lipinski and Johnny Weir’s sass-abundant skating commentary is basically its own Olympic sport, but their over-the-top and extravagant fashion during the Olympics had viewers comparing their commentary to another intense competition: the Hunger Games. And while Lipinski and Weir’s fashion sensibilities may skew towards the extreme (she brought 9 suitcases to PyeongChang, while he brought 13,) they both had a healthy sense of humor about their Hunger Game comparisons.

When it comes to fashion (and the Internet,) it appears that the odds are definitely in this pair’s favor.

US curler Matt Hamilton tickled the fancy of the collective Internet when he took to the ice in a red outfit and hat, that when paired with his sizable mustache, made him look like a real-life Super Mario. Needless to say, social media exploded with plenty of memes about Hamilton’s mustachioed Mario look, going so viral that it earned not only a co-sign from Team USA, but Hamilton himself.

A meme so good that it captures not only the attention of the Internet, but its subject and Team USA? That’s worth a gold medal.

The Bromance of Our Times, Yuzuru Hanyu and Javier Fernandez

While Japanese skater Yuzuru Hanyu’s skating prowess and seeming advocacy for Winnie-the-Pooh could have easily captured the attention of Olympics fans, it was his beautiful display of friendship with competitor Javier Fernandez that fans lost it over. While Hanyu and Fernandez have competed against each other for years, during that time, they’ve also developed a close friendship that transcends their competition on the ice rink.

Bromance will always medal, no matter what the competition.

Elizabeth Swaney’s journey to the 2018 Winter Olympics is both unconventional and long. The freeskier, who was born in the U.S. but competed in the Winter Games for Hungary, made a splash on the Internet when she did a simple skiing run that had zero tricks, unlike her competitors. Her performance, which gave off an air of cool nonchalance and seeming insouciance because of its simplicity, became the topic of debate when it was discovered that she qualified for the Olympics just by attending enough World Cup events. Despite those who might fuss about her unorthodox road to the Olympics, which had been a lifelong goal for Swaney, the Hungarian skier stated that she was just trying to “do the best for myself and represent Hungary as best as I can.”

Elizabeth Swaney’s Olympic ski run may not have come close to netting her a medal, but her viral status on the Internet shows that all her effort was not for naught. 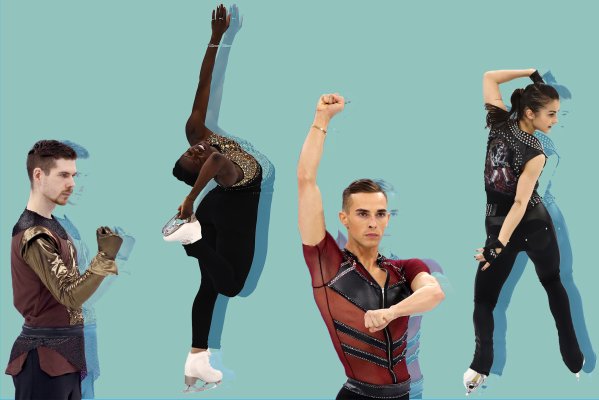 9 Olympic Figure Skating Songs That Got People Talking
Next Up: Editor's Pick