'I'd Run in There.' Trump Says He Would've Engaged the Florida Shooter Even Without a Weapon

President Trump harshly criticized the Broward County deputies who reportedly didn’t immediately enter Marjory Stoneman Douglas High School during the Feb. 14 mass shooting, saying he would have been braver in their place.

“You don’t know until you’re tested, but I really believe I’d run in there even if I didn’t have a weapon,” Trump told a gathering of 39 governors at the White House Monday morning. The deputies, he said, “weren’t exactly Medal of Honor winners,” and “the way they performed was frankly disgusting.”

The school’s resource officer has already resigned for not going inside the school while the shooting took place. USA Today reports that the county is investigating a claim that other deputies also hesitated to engage with the shooter who took the lives of 17 people.

Trump has vowed to take action on gun policy in the wake of the shooting, directing his Justice Department to ban bump stocks, accessories that increase the speed of fire on semiautomatic weapons. “I’m writing that out myself, I don’t care if Congress does it or not,” he said.

He also said he’ll focus on strengthening mental health resources and background checks — “If we see a sicko, I don’t want him having a gun,” he said — and suggested arming teachers and school administrators.

But he said above all, he wants to break the cycle of talking about reforms in the wake of a mass shooting and then “all of a sudden everybody is off to the next subject.”

“We’ll turn our grief into action,” the President said. 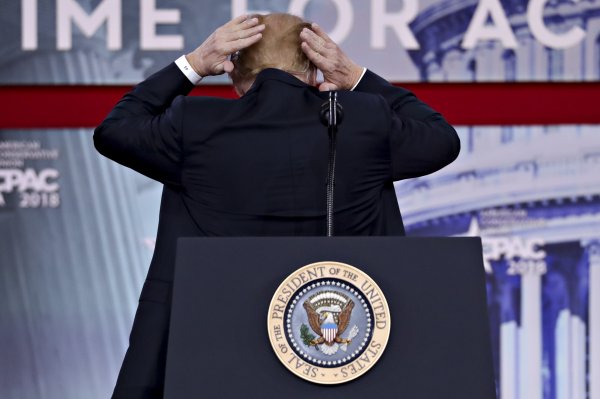 'I Try Like Hell to Hide the Bald Spot.' President Trump Admires Himself on TV at CPAC
Next Up: Editor's Pick