In 1942, when Britain’s wartime Prime Minister Winston Churchill paid a visit to U.S. President Franklin Roosevelt, his goal was to ensure the United States’ continued support of Britain in their fight against Hitler and Nazi Germany. However, Churchill, recently portrayed by Gary Oldman in Darkest Hour, was distracted. It was during that visit that he received word from a woman named Doris Castlerosse that she was stranded in the U.S. and desperate to return home.

Churchill went out of his way to obtain a rare seat for her on a flight home, keen to ensure that the American press wouldn’t get hold of her.

He succeeded at keeping the press away from his friend, and may have also succeeded at keeping a deeper secret about her for his entire career. Now, three-quarters of a century later, two researchers claim they’ve found evidence that Churchill and Castlerosse, a socialite and a great-aunt to supermodel Cara Delevigne, were lovers for a period in the 1930s. Their argument is the subject of a new documentary on the subject from the U.K.’s Channel 4, Churchill’s Secret Affair.

Castlerosse was also the model for several portraits painted by Churchill. When she died of an overdose shortly after she returned to England, Churchill’s fixer, Lord Beaverbrook, reportedly moved to quickly retrieve one of those paintings, which she had in her possession. The precise terms of the relationship between Churchill and Castlerosse were also concealed, and experts are quick to remind the public that portraits and second-hand reports are not necessarily proof of anything scandalous happening — but the possibility is nevertheless making headlines.

This claim about an alleged affair has been put forward by Richard Toye, The University of Exeter’s Professor of History, and Warren Dockter, historian at Aberystwyth University, after together they stumbled across archival tapes of Winston Churchill’s former private secretary, Jock Colville, speaking in 1985. Colville described to interviewers that Churchill had an affair “by moonlight in the South of France.”

“Now this is a somewhat scandalous story and therefore not to be handed out for a great many years,” Colville said. “Winston Churchill was … not a highly sexed man at all, and I don’t think that in his 60 or 55 years’ married life he ever slipped up, except on this one occasion when Lady Churchill was not with him and by moonlight in the South of France …. he certainly had an affair, a brief affair with … Lady Castlerosse as I think she was called. … Doris Castlerosse, yes that’s right.”

Speaking to TIME, Professor Toye said the affair would have occurred “mainly when Churchill was holidaying at the Riviera home of the American actress Maxine Elliot.” By his account, the affair would have begun during Churchill’s “wilderness years” in the 1930s, when the politician is known to have spent four holidays in Castlerosse’s company. He painted his three portraits of her while they were holidaying in the South of France. But by 1937 it was over, and Churchill threw himself back into his marriage to his wife Clementine, whom he had wed in 1908, and politics, becoming the venerated British statesman and politician we recognize today.

“What might have happened if the story had got out at the time is of course a matter of speculation,” he added. “It would likely have been damaging to Churchill’s reputation, but not necessarily fatal to his political career, which had survived many crises.”

“My mother had many stories to tell about… when they stayed in my aunt’s house in Berkeley Square,” Delevingne says in the documentary. “When Winston was coming to visit her, the staff were all given the day off.”

Churchill scholar Andrew Roberts has responded to these claims by pointing out that Delevingne wasn’t around at the time, Colville wasn’t working with Churchill yet, and many other women were painted by the PM — but Delevingne told filmmakers that her aunt “confided” in her mother about Churchill the next day.

“It was known that they [Churchill and Castlerosse] were… having an affair,” she said. 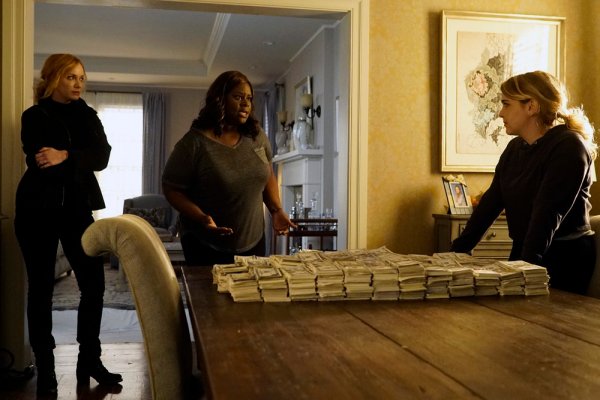 Good Girls Is the Perfect Show for This Moment
Next Up: Editor's Pick