Can government employees be required to pay union fees, even if they don’t belong to the union? Can you wear a “Don’t Tread on Me” T-shirt to a polling place? And do pro-life crisis pregnancy centers have to advertise that abortions are available elsewhere?

Each of these questions is at the crux of a case the Supreme Court will hear in the coming weeks. And while the particular facts differ, each gets to a dispute over one of the fundamental rights in American society: freedom of speech, and specifically whether it includes the right to avoid compelled speech.

“Free speech isn’t free if the government can force you to say things you disagree with,” says Carrie Severino, chief counsel and policy director of the conservative Judicial Crisis Network.

But on the other side, progressives see this argument as a veiled threat against government regulations meant to protect the interests of its citizens. There has been a “concerted effort on the right to use the courts to undermine worker rights, undermine critical consumer regulations, undermine laws that protect women and voters,” says Daniel Goldberg, legal director at the liberal Alliance For Justice. “One of the tools they have used is to expand considerably and use as a sword the First Amendment as a way to attack government regulations that they disagree with.”

Along with the following cases, the Supreme Court will also rule this year on Masterpiece Cakeshop v. Colorado Civil Rights Commission, which examines whether a baker opposed to same-sex marriage can be forced to make a cake for a gay wedding. It heard oral arguments in the Masterpiece case at the end of 2017, and it fits into this constellation of other thematically similar cases coming up this spring.

Here’s what you need to know about the three free speech cases coming up at the Supreme Court.

The story: Mark Janus doesn’t belong to the union that represents him— the local branch in Illinois of the American Federation of State, County, and Municipal Employees. But money is still taken out of his paycheck every month for union fees.

The legal question: In 1977, the Supreme Court ruled in Abood v. Detroit Board of Education that state and local governments can require public employees who don’t join the union to pay some fees to help with the costs of contract negotiations that they benefit from too. Janus is arguing this is unconstitutional because union bargaining is inherently political, so forcing him to pay union fees, even ostensibly just for contract negotiating, is compelling speech from him through funding. “The union’s fight is not my fight,” Janus told Illinois Policy. The union side argues that what these fees cover is not political, and if non-union members aren’t forced to pay a fee but still benefit from the union negotiations, they will become “free riders” on the backs of union members.

History at the court: The way the Supreme Court decides the Janus case will likely come down to one vote: Neil Gorsuch. The high court heard a challenge to agency fees two years ago, weeks before Justice Antonin Scalia died. After his death, the court deadlocked, leaving the lower court’s ruling for the unions to stand. Now that Gorsuch is on the bench, his vote will break the tie (assuming none of the other justices change their minds).

The story: Minnesota law prohibits the wearing of any “political badge, political button, or other political insignia at or about the polling place” on election days. In 2010, Andrew Cilek went to his polling place in Hennepin County, Minnesota wearing a T-shirt with the Tea Party logo, the slogan “Don’t Tread on Me,” and an image of the Gadsden flag on it, as well as an anti-voter fraud “Please I.D. Me” button. An election worker wouldn’t allow Cilek to vote unless he removed or covered up the messages; after multiple attempts, Cilek was eventually allowed to vote, but the worker recorded his personal information.

The legal question: The Minnesota Voters Alliance argues that the state’s ban on political apparel violates the First Amendment because its construction is too broad and election officials have too much discretion to decide what is political, thereby hurting protected speech along with active electioneering. (It points to one instance, for example, when voters wearing MIT shirts — Massachusetts Institute of Technology — were stopped by poll workers who thought the shirts showed support for presidential candidate Mitt Romney.) The state, however, argues that the Minnesota law is well within established legal bounds for speech restrictions at polling places that protect voters.

History at the court: State laws vary on this issue, but in 1992, the Supreme Court upheld a Tennessee law banning campaign materials within 100 feet of a polling place. At the time, the court held that the law didn’t infringe upon free speech, because voters have a “fundamental right” to “cast a ballot in an election free from the taint of intimidation and fraud,” and that “some restricted zone around polling places is necessary to protect” that right.

The story: Under a 2015 California law, crisis pregnancy centers (nonprofit organizations opposed to abortion) have to abide by two rules: for the pregnancy centers that are licensed to provide medical services, they need to advertise free or low-cost abortions provide a telephone number for the state agency to put patients in touch with providers. For the centers not licensed for medical services, they must make clear in up to 13 languages that they cannot provide medical help.

The legal question: The crisis centers argue that advertising publicly funded abortions violates their First Amendment free speech rights and that the medical disclaimer on the unlicensed centers is too burdensome. “It’s forcing pro-life pregnancy centers to effectively advertise for state-sponsored abortions,” says Severino. The state argues that these crisis centers are deceptive and don’t provide women with the full range of their treatment options, and that the regulations are “well within the First Amendment’s tolerance for the regulation of the practice-related speech of licensed professionals.” California Attorney General Xavier Becerra said in a statement, “Information is power, and all women should have access to the information they need when making personal healthcare decisions.” 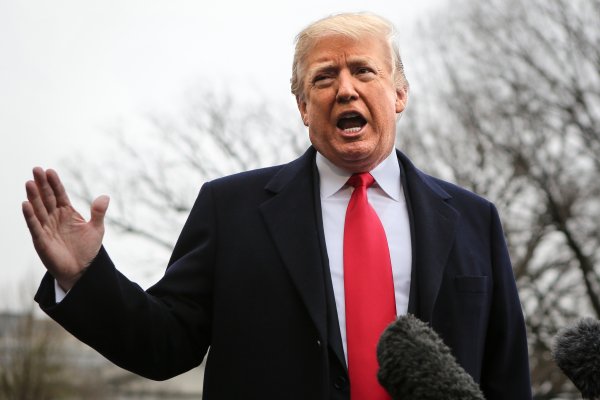 'I'd Run in There.' Trump Says He Would've Engaged the Florida Shooter Even Without a Weapon
Next Up: Editor's Pick