Nothing was more rock and roll at the 2018 Winter Olympics closing ceremony than this one kid shredding on the electric guitar.

As the drone fleet took to the skies, 13-year-old wunderkind Yang Tae-hwan stole the show when he took over the stage during the closing ceremony to shred a song.

The Korean guitarist rocked out in a turtleneck sweater and leather jacket, proving he knows just how to wail.

During the live broadcast of the closing ceremony from PyeongChang Sunday, the internet — and this may not shock anyone — immediately declared Yang a true hero.

It’s not hard to see why. Yang can tear it up guitar better than most people do most things. For instance, he can make any familiar classic sound like the most hardcore rock ballad. He got everyone rocking out to “Winter,” a concerto from Antonio Vivaldi’s iconic 1725 baroque symphony, “The Four Seasons.”

Everyone is thoroughly impressed.

So much so that the word hero popped up and popped up frequently.

Even the fandoms who came for their K-pop idols simply could not look away.

People are already trying to be him.

Or wish they were him, which is understandable.

As far as entertainment goes, the closing ceremony’s list of performers was stacked. They had insanely popular K-Pop luminaries CL and EXO, impressive choreography and rhapsodically beautiful visuals. But most importantly, they had Yang and his guitar.

As a teen with glasses and the ideal curly hair for headbanging, Yang instantly solidified his status as the coolest individual on the Pyeongchang Olympic Stadium stage during the closing ceremony. It was as though every drone that came together to form the Olympic rings symbolized the achievement that he exists on earth and we can all witness it.

The teen guitarist is something of a prodigy.

According to NPR Asia’s Elise Hu, Yang got his big break on the talent show Star King.

He’s been mastering the electric guitar since a young age.

This one is clearly going places. Rock on Yang. 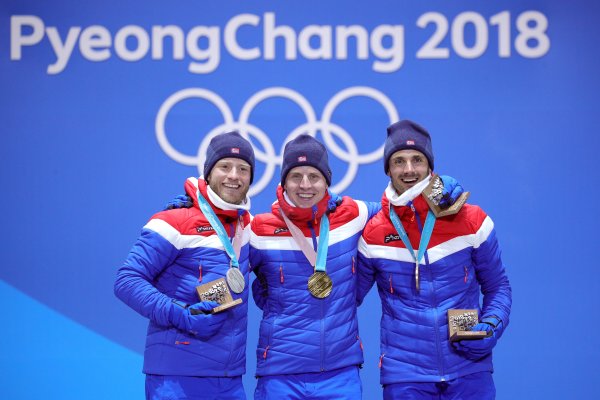 This Is the Final Medal Count for Every Country at the 2018 Winter Olympics
Next Up: Editor's Pick