USA's Curling Athletes Shocked the World by Winning Gold. Then They Got the Wrong Medals

The world was not prepared for America’s men’s curling team to come from behind and capture curling gold, but capture gold medals they did.

Then it came time for the medal ceremony on Saturday, and there was a little mix-up.

John Shuster’s U.S. men’s curling team stepped up to the podium for the part when they bestow that prized hardware. There were million-watt smiles and a few tears and other emotions one associates with moments like these. But after the ceremony, the winning team members looked down to notice something was off in the upper right section of the medallions. Two words: “Women’s Curling.”

Yes, the gentlemen initially received the wrong medals, ones stamped out for the American women’s curling team, who did not advance to the curling final showdown. But gold is gold and there’s no denying that they won the whole thing, even if the medals didn’t say it at first. Luckily, they quickly got the right ones.

Team USA beat Sweden, 10-7, in the championship for the gold medal in curling at Gangneung Curling Centre on Saturday in a surprising turn of events. Shuster clinched the win with a rare and especially smooth score that involved a five-ender in the eighth.

Medal confusion aside, comedy gold has followed these guys wherever they went around PyeongChang. Besides this shocking upset, other global contributions include propelling the viral mustache militia trend that got a bunch of guys sharing mustache selfies and the unforgettable memes of Matt Hamilton and his doppelgänger, Super Mario.

Great job all around team.

As is to be expected, the internet had plenty of fun comparing the moment to the 2017 Oscars mix-up and other awards ceremony snafus. 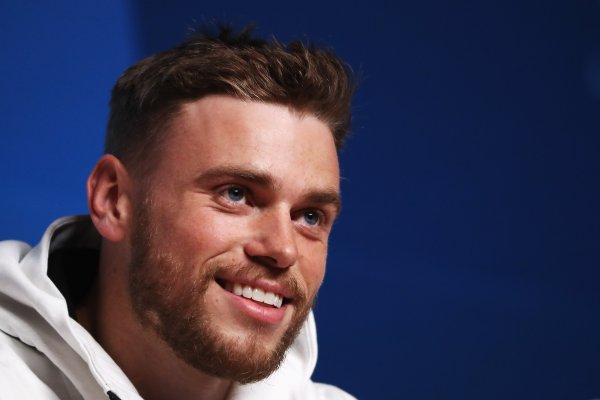 Olympian Gus Kenworthy Is Bringing Home a Dog
Next Up: Editor's Pick