About a week ago, John Shuster’s United States men’s curling team was struggling to a 2-4 start in the Olympic tournament. America stood on the verge of a third straight Olympic disaster with Shuster as skip (team captain). Shuster’s wife, Sara, tried to give him a pep talk. “I let my wife say everything she could possibly say to me to try to talk me off the ledge,” says Shuster. “I didn’t respond much to her however.”

Shuster then walked, alone, to a grassy knoll near the curling venue in Gangneung, South Korea. He sat down, stared at the venue, then decided he was sick of feeling pain at the Olympics. “I’m getting my heart broken by this sport,” Shuster said to himself. “And this is silly.”

After that quiet moment in the grass in South Korea, Shuster wrote one of the great turnaround stories in U.S. Olympic history. The men’s curling team won its last five games, capping off their improbable run with a 10-7 upset victory over Sweden at the Gangneung Curling Centre on Saturday.

John Shuster of the United States lines up a shot against Sweden during the Curling Men's Gold Medal game on day fifteen of the PyeongChang 2018 Winter Olympic Games at Gangneung Curling Centre on February 24, 2018 in Gangneung, South Korea
Dean Mouhtaropoulos - Getty Images

With the score tied at 5-5 in the eighth end — Olympic curling games consist of 10 ends, which are kind of like innings — Shuster knocked two Swedish stones out of the scoring area on the last shot of the end, leaving a remarkable five U.S. stones in the dartboard-looking house. The clutch throw gave the U.S. five points and an insurmountable 10-5 lead.

Swedish skip Niklas Edin had thrown a poor shot to set Shuster up for the gold-clinching takeout. Even before Shuster threw, Edin knew the game was gone. Still, Shuster had missed easy attempts in the Olympics before. Couldn’t he choke again?

No chance. “I can’t tell you how unnervous I was,” says Shuster. The American fans erupted when he grabbed the five points. Watching back in the U.S., America’s foremost Twitterin’ curling fan, Mr. T, jumped off his couch. “And I don’t like to get off my couch,” Mr. T tells TIME in a 2:30 a.m. telephone interview after the game.”It’s real comfortable.”

Edin, the Swedish skip, would have conceded the match right there, but his team played out the last two ends in order to calm down a little. Otherwise, Edin says, he would have thrown the silver medal “in the sea.”

Team USA may have fallen short of its medals target at the PyeongChang Games, but thanks to Jessie Diggins and Kikkan Randall taking American’s first-ever cross-country skiing gold on Wednesday, the women’s hockey shootout win over Canada on Thursday, and especially the underdog curlers — the U.S. had never reached an Olympic curling final — America’s Olympics couldn’t have possibly ended on a more surprising, delightful note.

Team USA played loose in Thursday’s semifinal against Canada and played the same away against Sweden. Their opponents took notice. “They had nothing to lose,” says Edin. “And we had everything to lose.”

Mr. T called in for a pre-game speech. “I love what you’re doing,” he said over the phone. “I understand the athletic ability that it takes.” The players laughed when their cheering section shouted “Box of beers! Box of beers!” whenever someone brought a round back from the concession stand. Shuster’s son Luke, 4, led “USA!” chants.

“I love your mustache!” a fan yelled to American curler Matt Hamilton, who thanks to his red hat, stocky build and trimmed upper lip, could pass for a 1980s backup catcher for the St. Louis Cardinals. Hamilton glanced up to the crowd and tussled his stache. “Believe it or not,” says Hamilton. “I don’t hate attention.”

While Hamilton and teammates Tyler George, who manages a liquor store, and John Landsteiner, a corrosion engineer, all came up big in the gold medal game, the win really belongs to Shuster, a four-time Olympian who’s seen his fair share of derision. After leading the Olympic team to a last place finish in Vancouver, and a second to last effort in Sochi, fans knocked Shuster, a former bartender who now works part-time at Dick’s Sporting Goods, online. His physique — or lack of it — made him an easy target. USA Curling started a high-performance program after Sochi to improve America’s fortunes on the curling sheet.

Initially, Shuster didn’t make the cut. So he recruited Hamilton and George and Landsteiner, a member of the 2014 team in Sochi, to try to play their way into USA Curling’s good graces. “I don’t think ‘team of rejects’ is the right term,” says Shuster, 35. “I think it was just Team Reject.”

“Somebody put a bee under his bonnet,” says Shuster’s father, Tom. “He knew it was possible.”

Shuster bought into the high-performance ethos. He met with sports psychologists. When officials asked him to lose 30 pounds, he did. “I’d lie if I didn’t say I wanted it badly for him,” says George. “I couldn’t be happier for John that he never has to make another shot the rest of his life to love the game.”

Shuster’s mom, Jackie says “this is our miracle on ice.”

Let’s just leave it to America’s curling conscience, Mr. T, to put it all in perspective. He compared the U.S. team to Rocky, who pounded his own character, Clubber Lang, in Rocky III. “Aw man, what a show, what a show,” says Mr. T. “John Shuster, he’s the greatest, man. The pressure was on, it didn’t phase him. No one thought they could do it. They’re what we really need right now during tough times. They can bring us all together, put a smile on our faces. They’re like a good medicine.” 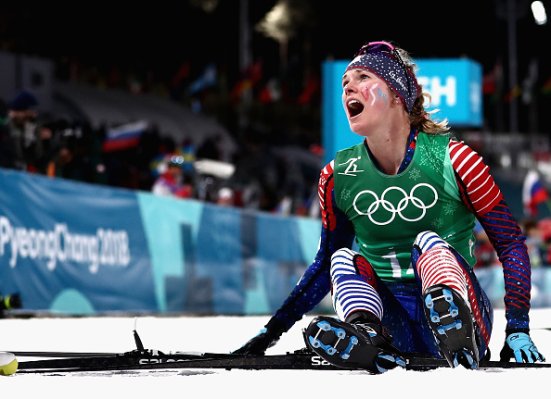 The Best Gold Medal Celebrations of the 2018 Winter Olympics in GIFs
Next Up: Editor's Pick