The 2018 Winter Olympic Games are officially over, with the closing ceremony bringing down the curtain on PyeongChang’s turn in the global spotlight. There were no shortage of highlights on the snow and ice: Norway ruled, dominating the rest of the world in the final Olympic medal count. Ester Ledecka of the Czech Republic wowed, becoming the first woman to win an Olympic gold medal in two different sports at the same Winter Olympic Games. Ice dancing managed to captivate the world’s attention, with Tessa Virtue and Scott Moir winning hearts far beyond Canada. And while the United States fell short of its medals expectations, Chloe Kim, Mikaela Shiffrin, Jesse Diggins, Adam Rippon and others produced plenty of thrills. (Curling gold, baby!)

What will we remember about a Winter Olympics that began under a fog of geopolitical tension—would North and South Korea really play nice with one another?—and ended, as the Olympics almost always do, as a celebration of athletic excellence? Well, these are the things I’ll remember most after covering the Games: the eight craziest things I saw at the 2018 PyeongChang Olympics.

While lingering backstage at the Opening Ceremonies, I spotted him, jumping up and down, trying pump himself up. Pita Taufatofua, the Tongan Olympian who skyrocketed to global fame while marching shirtless and covered in coconut oil at the Rio Olympics in 2016, was giving it another go. Apparently twenty-degree temperatures weren’t enough to stop Taufatofua, now competing at the Winter Olympics as a cross-country skier, from baring his chest. “I’m waaaaaaarm,” Taufatofua shouted before entering the stadium. “You liiiiiiie,” I thought.

But a little chill went a long way. Fans swooned while the Tongan flagbearer froze.

The North Korean cheering squad bounced from event to event, swaying their arms in unison, singing “cheer up” when the unified Korea women’s hockey team gave up goals. While most of the crowd at a game between Korea and Switzerland got our of their chairs and danced when a performer sang “Uptown Funk” during an intermission, the North Korean women sat in their seats, singing their traditional tunes. Male North Korean minders took them to the bathroom and waited outside the doors. The cheerleaders were a curiosity around PyeongChang, with spectators debating whether they were a well-intention charm offensive or unwitting tools of the regime’s propaganda.

Like so many others, I did double take when I saw the headlines. Russian curler fails drug test. Really? First of all, curling’s a game that involves sweeping. Billions of people use broomsticks without resorting to performance-enhancing substances (expect, perhaps, for morning coffee). Second, Russia was nearly kicked out of these Olympics thanks to the country’s state-sponsored doping scheme during the Sochi Olympics. In fact, the International Olympic Committee (IOC) dubbed the team in PyeongChang “Olympic Athletes from Russia,” and didn’t let the Russians compete under their own flag.

But at least Russia got to show up. And this was thanks the IOC got? A Russian curler doping?

Russian curler Alexander Krushelnitsky was stripped of the mixed doubles curling bronze medal he won with his wife, Anastasia Bryzgalova. And after Russian bobsledder Nadezhda Sergeeva also failed a drug test—she had even worn a shirt that read “I don’t do doping”—the IOC declined to reinstate the Russian Olympic Committee, and the Russian flag, at the PyeongChang closing ceremonies. Though in an another classic case of IOC political triangulation, Russia could be reinstated soon if no other positive tests from PyeongChang emerge.

Jocelyne Lamoureux-Davidson’s deciding shootout goal in Team USA’s 3-2 win over Canada in the gold medal game was just plain nasty. She swerved around the ice while skating towards the net, already intent psyching out Canada goaltender Shannon Szabados. Her stick flinched right, for a nanosecond, then came back to the left; by that time, Szabados was already confused, and Lamoureux could have just backhanded the shot. But a coach nicknamed this maneuver Ooops … I Did It Again, after the Britney Spears song, for a reason. She had to do the “Again” part.

So Lamoureux-Davidson went back to her right, for another fake. A helpless Szabados just fell backwards, Lamoureux-Davidson finished the trick, and after one more Maddie Rooney shootout save, the U.S. women won their first Olympic gold medal in 20 years.

The Olympic women’s hockey final, with so much at stake for several American players who had lost two straight gold medal games to Canada, including a heartbreaker in Sochi when the Americans blew a late 2-0 lead, may have been the most captivating event I’ve witnessed in the seven Olympics I’ve covered. The game had everything you wanted in a big-ticket rivalry showdown. With a shimmy-shake winner to cap it off.

This one, I really had no right seeing, but dumb luck prevailed. While at the PyeongChang cross country venue reporting a story about Norway’s superiority at these Olympics, I stood in the mixed zone—the area where reporters from around the world jostle to stick tape recorders in the faces of athletes following their competitions (good times)—to talk to the Norwegians after their inevitable win, or at worst silver, in the ladies sprint relay event. Two skiers were neck and neck at the end, the crowd was going wild. Oh, this is fun, I thought. A photo finish. They both crossed the line; one skier was tackled by a teammate and celebrated. I looked up at the scoreboard: did Norway win? Maybe Sweden?

No. The United States of America.

Whaaaaaaat? Yes, I had accidentally witnessed the first cross-country skiing gold medal in American history, when Jessie Diggins and Kikkan Randall finished just ahead of Sweden for the stunning upset (The Norwegians finished third; they’re still really good). So I switched gears to write a piece about Randall, a five-time Olympian and the only mom on Team USA, and Diggins, a glitter fan with an infectious personality. Thanks to their triumph, Diggins carried the U.S. flag for the closing ceremony.

One of the charming quirks of these Olympics were the off-duty karaoke buses that transported fans and media to the events. The neon-lights made me want to stand up and sing at 2:30 am after covering a late-night hockey game (not really). Rather than lyrics, short track speedskating races and commercials flashed on the TV in front of the bus. In one ad, water gushed out of someone’s nose. In another, some guy ate snow.

The crushed Fitz beer cans were scattered in the snow, on a Sunday morning in Pyeongchang. Must mean I’m hanging out with the family of Red Gerard, the 17-year-old slopestyle snowboarder who won a gold during the second full day of Olympic competition. No family was determined to treat their Olympic experience like a concert tailgate more than Gerards, Cleveland transplants now living in Colorado. They stocked a cardboard box with Fitz, a South Korean beer. After Gerard finished his last run, and the judges flashed the scores, cousins and nephews and brothers and sisters went berserk. His mom, Jen, turned to me. “Wait, what place is he in?” She thought everybody was celebrating because he landed cleanly. She had no idea he was about to win it all. 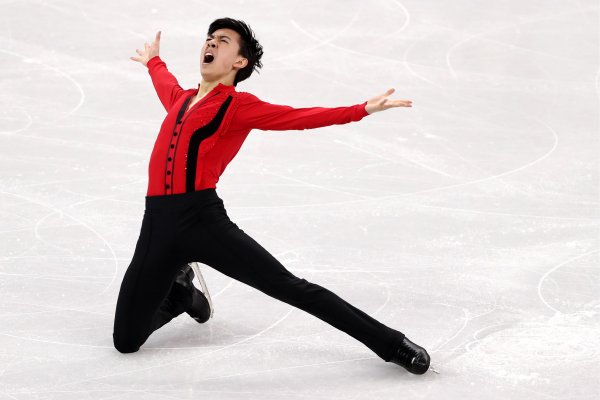 Here's What Happened to American Figure Skaters at the 2018 Winter Olympics—And Why They Could Dominate in Beijing in 2022
Next Up: Editor's Pick