Nadezhda Sergeeva, pilot of the two-woman bobsled team representing the Olympic Athletes from Russia, proudly proclaimed her anti-doping stance when she appeared in a YouTube video wearing a sweatshirt with the slogan “I don’t do doping” stamped brightly across the front.

But that slogan isn’t ringing so true today, after Russian Bobsled Federation president Alexander Zubkov announced that Sergeeva had tested positive for a banned heart medication, apparently the stimulant trimetazidine, in a drug test. The federation says that the bobsledder does not have a prescription for the drug.

Sergeeva and her partner Anastasia Kocherzhova finished 12th in the two-woman bobsled event earlier this week; Germany, the U.S., and Canada took the gold, silver, and bronze. Sergeeva had previously been tested on Feb. 13, with no adverse findings. This announcement marks the second OAR athlete to fail a doping test, following teammate Alexander Krushelnitsky of the curling team; his bronze medal was stripped from him after he tested positive for meldonium. So far, they are the only two Winter Olympics athletes to test positive for banned drugs during these Games.

Naturally, Sergeeva’s unfortunate situation is raising eyebrows — especially given the words on her sweatshirt. Hypocrisy is not a great look.

Russia was barred from officially competing in the 2018 PyeongChang Olympics earlier this year because of just this doping issue, although they ultimately cleared 168 athletes to compete as Olympic Athletes from Russia. So far, that delegation has picked up 14 medals, including Alina Zagitova and Evgenia Medvedeva’s gold and silver in ladies’ figure skating on Thursday event. 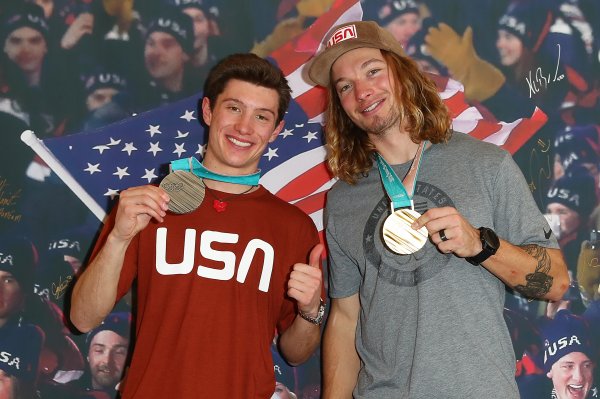 These Olympic Winners Got Matching Tattoos as Well as Medals
Next Up: Editor's Pick