French figure skater Maé-Bérénice Méité has not shied away from the spotlight at the 2018 Winter Olympics in PyeongChang, South Korea.

Midway through her performance during the ladies’ single free skate program that aired Thursday night, Méité pulled back a portion of her black skirt to reveal a bedazzled, sparkling one underneath. That sparked another mid-program change, with the music shifting from Chopin to the more upbeat “Happy” by C2C, a French band.

With a fall during her program, Méité earned a score of 106.25 for her long program. That makes her final score in the event a 159.92, putting her in fourth place after she skated early in the final event Thursday evening, before top competitors like Alina Zagitova and Evgenia Medvedeva took the ice.

Méité’s risk-taking follows similar attention-grabbing moves she made previously during the Olympic Games. Earlier this week, Méité skated to Beyoncé’s hit “Run the World (Girls)” — a choice made possible by a new rule that allows skaters to perform to music with lyrics. And she did so wearing black pants — an ensemble that stood out compared to her competitors’s more traditional costumes.

The skater received praise for her popular song choice by Beyoncé fans around the world — including Saturday Night Live‘s Leslie Jones, who’s known for her Olympics fandom.

Although the figure skater likely won’t crack the top 10 in the singles event at the Games this year, her creativity appeared to be well received Thursday night by fans on Twitter. 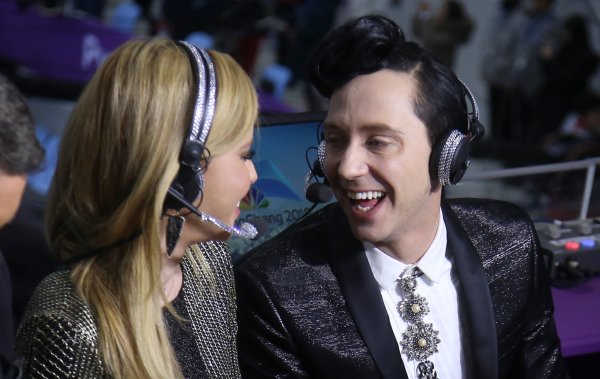 Inside Tara Lipinski and Johnny Weir’s Rise From Olympic Figure Skaters to Beloved Commentators
Next Up: Editor's Pick