The 90th annual Academy Awards are upon us, and the evening promises to bring a mix of the boringly predictable and the totally impossible to call. It’s been a long haul since the very first critics awards were doled out after Thanksgiving, but as the season wore on through the Golden Globes, SAG Awards and Critics’ Choice Awards, enough hints have been dropped for us to make some educated predictions as to which of the 2018 Oscar nominees will be taking home the gold Sunday night.

Below are TIME’s 2018 Oscar predictions, from Best Picture to Best Foreign Language Film.

Call Me By Your Name | Darkest Hour | Dunkirk | Get Out | Lady Bird | Phantom Thread | The Post | The Shape of Water | Three Billboards Outside Ebbing, Missouri

This is, admittedly, a bold choice — perhaps even a foolish one for a betting person. The safe choice is certainly Three Billboards, or maybe The Shape of Water. But in a year in which so many of the big awards feel predictable, in which there’s no Best Picture consensus, critical or otherwise, in which the category is decided not by a popular vote but by a preferential ballot, it’s not unreasonable to expect the unexpected. Get Out should receive a boost from the Academy’s younger, more diverse new ranks, and choosing it offers a chance for the Academy to say that their pick is, as it was last year, relevant and of the moment.

MORE: Jordan Peele on Get Out, His Fears and Cultural Hope

This one has been pretty much zipped up since Oldman appeared onscreen as Winston Churchill, with prosthetic jowls and a well-chewed cigar, at the Telluride Film Festival last September. In many ways it’s a career win for the versatile actor, who’s been nominated once before. There was some uncertainty early on as to whether some dark shadows from his past and the early awards season love for Timothée Chalamet might lead to an upset. Anything is possible, but it’s pretty safe to say that Oldman can start practicing his “V for Victory.”

Like Oldman, McDormand has swept at every televised awards event this season, and then some. While Three Billboards has been mired in some controversy, none of it has touched McDormand’s gritty performance as a bereaved mother seeking justice. She’s pretty hard to touch here, and a win would be her first since 1997, when she won for Fargo.

MORE: Three Billboards Outside Ebbing, Missouri Is a Thin Portrait of Small-Town America

Rockwell’s role in Three Billboards, unlike McDormand’s, has been somewhat mixed up in critiques of the movie — namely, that the film humanizes his racist cop while drawing flat, hollow black characters in the margins. But the criticism has fallen largely on writer-director Martin McDonagh rather than on the talented, much loved and until now underappreciated Rockwell. His wins at the Golden Globes, SAG and Critics Choice awards — after what seemed like a promising early surge for Dafoe’s easier to love performance in The Florida Project — suggest that this one’s in the bag.

As LaVona, some of Janney’s best moments take place when she’s acting opposite a bird
NEON

Like the other acting frontrunners, Janney has been indomitable this awards season. Between her popularity in Hollywood and the splashiness of the role — the woman spars with a parakeet, for crying out loud — it’s a more obvious choice for voters than the closest contender, another very complicated albeit more nuanced mother played by Laurie Metcalf in Lady Bird. Either way, we’re pouring one out for Tiffany Haddish.

MORE: The True Story Behind the Movie I, Tonya

This field is one of the most exciting of the 2018 Oscars: it includes two directors nominated for their debut features (Peele and Gerwig), one of whom would be the first black director to win and the other of whom would be the second woman. The remaining three are among the best established directors working today, and none of them has ever won the award. But del Toro is the likeliest candidate here, not least of all because he won the top honor at the Directors Guild of America Awards, and the Best Director Oscar has gone to the DGA winner all but seven times in the last 50 years. Del Toro is well respected by his peers and of all 13 nominations for The Shape of Water, this one feels like the likeliest win.

The Big Sick | Get Out | Lady Bird | The Shape of Water | Three Billboards Outside Ebbing, Missouri

Get Out‘s best shot at a win Sunday night is in this category full of worthy entrants. It has been more than a year now since Jordan Peele’s social thriller hit theaters, and while it was arguably the defining movie of 2017, its ability to provoke and excite hasn’t dulled even as we’re well into 2018. Its brilliance, of course, begins with Peele’s original, funny and terrifying writing, and, what’s more: who doesn’t want to hear what Peele has to say from that podium?

MORE: Jordan Peele: Get Out Explores Why Black People Are Afraid of White People

The Italian villa in "Call Me By Your Name" is on the market for €1.7 million.
Sony Pictures/Everett Collection

Another Best Picture nominee with just a handful of other chances to win Sunday night, Call Me By Your Name has its best shot with James Ivory’s adapted screenplay. Ivory, 89, was last nominated in 1994, for Remains of the Day. Though credit is also due to André Aciman, who wrote the novel from which Ivory adapted the screenplay, the film’s climactic father-son pep talk is one of the most memorable, heartrending monologues of the year, and much deserving of an Oscar.

MORE: Call Me By Your Name and The Shape of Water Fearlessly Display Love

Pixar’s celebration of family, memory and music is quite possibly the surest bet of the night. Universally beloved, the film has collected victory after victory on its way to Oscar night. The rest of the choices are divided among two films too niche to gain enough steam, and two that didn’t make enough of an impression on critics. And Coco — energetic, vivid and celebratory — is a feel-good choice regardless of the competition.

Chilean actress Daniela Vega stars in 'A Fantastic Woman,' which is up for best foreign language film at the 2018 Academy Awards.
Fabula

This one is by no means a shoo-in. But A Fantastic Woman has made a star of lead actor Daniela Vega, who audience will meet on Sunday night — even if they haven’t seen the film — when she becomes the first trans presenter ever to grace the stage at the awards show. Its story about a nightclub singer in the aftermath of her older boyfriend’s death is a vibrant, humanizing portrait whose victory would be a satisfying conclusion to a close race.

MORE: This Oscar-Nominated Film Asks Viewers a Question: What Are You Seeing in Me?

It’s a delightful odd couple that’s hard to resist: 35-year-old street artist JR and 89-year-old French director Agnès Varda. Among a field of documentaries that deal with difficult subjects — financial crisis, doping scandals, civil war, a murder with no justice — their film stands out for its lighthearted and optimistic but very often poignant portrait of humanity. 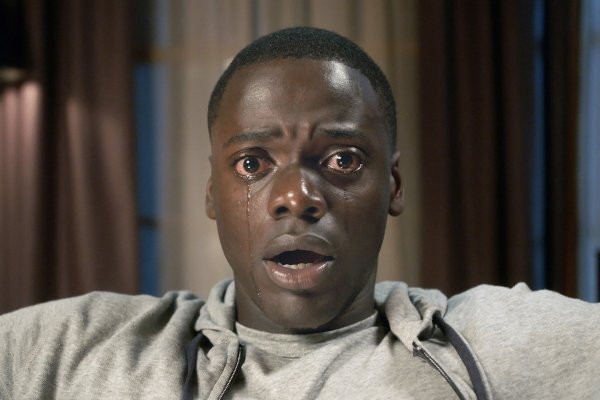 Americans Have Complicated Feelings About the Oscars
Next Up: Editor's Pick