WASHINGTON, USA - February 21: A student holds a placard as hundreds of students call for greater gun control laws as they protest outside of the White House in Washington, USA on February 21, 2018. Protests led mostly by young students were sparked around the country calling for greater gun control after the mass shooting at a high school in Parkland, Fla. where 17 people were killed. (Photo by Samuel Corum/Anadolu Agency/Getty Images)
Anadolu Agency—Getty Images
By Sarah Gray

A school district in Texas has been the focus of criticism, after a letter from the Needville Independent School District’s superintendent Curtis Rhodes warning against student protests spread on social media.

The letter addressed last week’s school shooting in Parkland, Florida that left 17 dead, saying that the district is “sensitive to violence in schools.” It also states that there is a “‘movement’ attempting to stage walkouts/disruptions of the school,” and cautions that if students in the Needville school district, located 40 miles southwest of Houston, participate in protests they’ll receive a three-day suspension.

“Please be advised that the Needville ISD will not allow a student demonstration during school hours for any type of protest or awareness!!” the letter states. “Should students choose to do so, they will be suspended from school for 3 days and face all the consequences that come along with an out of school suspension. Life is all about choices and every choice has a consequence whether it be positive or negative. We will discipline no matter if it is one, fifty, or five hundred students involved.”

Following the Marjory Stoneman Douglas High School shooting, students across the country have been organizing demonstrations to call for school safety, gun control, and access to mental health services. Lie-ins, walkouts, and protests in front of the White House were held over the past week. Nation-wide protests have been planned including the March 24 March For Our Lives march on Washington and national school walkouts on March 14 and April 20.

The message was originally posted on the Needville High School Facebook page. Screenshots of the letter were shared via social media.

The school’s Facebook page has since been taken down. TIME reached out to Superintendent Rhodes and will update this post once we’ve heard back.

After the message spread on social media, critics wondered if the threat of punishment for protesting violated the students’ First Amendment rights.

“It’s a quintessential First Amendment violation, and most Americans have an instinct about that,” Georgetown law professor Heidi Li Feldman told The Washington Post. “What’s really weird about this is that they announced they will suspend people over the content of their off-campus protest. Content-based restrictions on speech are anathema to the First Amendment. So this looks like a total problem.” 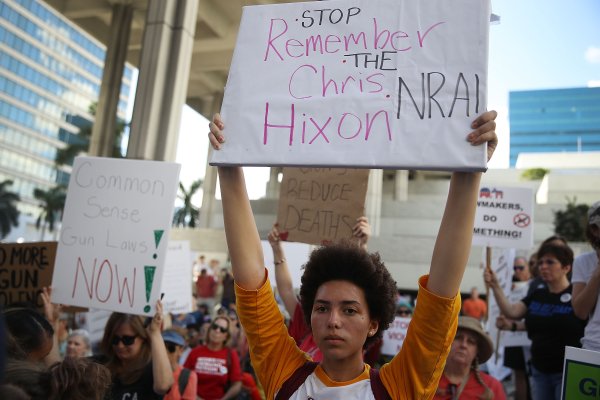 'This Is the New Normal Unless We Stop It.' Teachers Are Fighting for Gun Control After Parkland
Next Up: Editor's Pick