Yes, Obama Mishandled Russia's Election Hacking. But So Has Trump

Russia's President Vladimir Putin (L) and then U.S. President Barack Obama met after the 70th session of the United Nations General Assembly in New York on Sept. 28, 2015
Anadolu Agency—Getty Images
Ideas
By Ian Bremmer
Bremmer is a foreign affairs columnist and editor-at-large at TIME. He is the president of Eurasia Group, a political-risk consultancy, and GZERO Media, a company dedicated to providing intelligent and engaging coverage of international affairs. He teaches applied geopolitics at Columbia University’s School of International and Public Affairs and his most recent book is Us vs. Them: The Failure of Globalism.

Special Counsel Robert Mueller has indicted 13 Russians and three Russian entities for meddling in the 2016 U.S. election. For anti-Trumpers, the indictments are proof positive that Donald Trump colluded with the Russians. For Trump supporters, the lack of any Trump campaign folks associated with this latest wave of indictments is exonerating (or, as Trump succinctly puts it, “no collusion!”).

Either way, it’s too soon to tell. But the news has prompted Trump to raise a legitimate question: “Obama was President up to, and beyond, the 2016 Elections. So why didn’t he do something about Russian meddling?” Indeed, if all this happened under Barack Obama’s watch, shouldn’t Trump’s predecessor be the one shouldering the blame for Russian interference? And the answer, up to a point, is yes.

The U.S. government under Obama knew what the Russians were doing. Obama was warned repeatedly by Eastern European governments that Russia was meddling in their own elections. And while Latvian elections don’t exactly rank high on the list of an American president’s priorities, the White House could have guessed what the Russians were gearing up to do — and should have sent them a forceful message to knock it off. Obama apparently issued a direct warning to Russian President Vladimir Putin when they met in person in September 2016, but it came too late and had little effect.

The lack of defensive cyber weapons to deter the brunt of the meddling obviously complicated matters (and still does). Still, if you can’t formulate effective cyber-defense measures, at least put together clear policies to deter future attacks—go on the offensive and freeze Russian bank accounts, threaten to publish embarrassing information about Putin and his inner circle, and so on.

After the surprise result of Nov. 8, 2016, Obama shifted to damage control mode and addressed Russia’s disinformation campaign head on with sanctions. But even then he soft-pedalled—in announcing the sanctions, he conflated Russia’s interference in U.S. elections with the harassment of U.S. diplomats in Russia (which goes on all the time), thus downplaying the meddling role of Russia in the election.

In fairness to Obama, he had reasons to hesitate. Hillary Clinton looked poised to win the election, right up until the election results began rolling in. Why needlessly politicize an election that looked like it would withstand Russia’s disinformation campaign? Why call into question the legitimacy of a central tenet of democracy—arguably THE central tenet of democracy—when it looked like the American people would overcome the challenge?

Then there are Obama’s more personal reasons. He probably didn’t want his last significant act as President to be seen as political, tarnishing his legacy. He tried to get Republican leadership to help him raise the warning flags, but Senate majority leader Mitch McConnell refused to join him in a bipartisan condemnation of Russia. Pro-Obama folks will point to that as exculpatory, but it really isn’t—it is up to the president of the United States to put the country ahead of personal legacy. And on that front, Obama failed. Spectacularly.

But here’s the thing: the failures of Obama do not excuse the failures of Trump. Russia was Obama’s problem so long as he was commander-in-chief; since Jan. 20, 2017, it has been Trump’s problem — and he has somehow managed to do a worse job confronting the Russian threat than his predecessor.

Trump and the U.S. intelligence community now have more extensive knowledge of Russia’s operations than Obama did, and more information continues to spill out. Yet Trump hasn’t done a thing to deter the Russians from taking the same action in the 2018 elections and beyond; indeed, he’s currently refusing to enforce sanctions passed by Congress in explicit retaliation against Russia’s U.S. election hacking.

Trump’s willful ignorance shouldn’t surprise us. This is the man who couldn’t handle Steve Bannon taking even partial credit for his election victory; of course he would refuse to acknowledge Russia’s role in his life’s most triumphant moment. Even when confronted with incontrovertible evidence from his intelligence agencies, he falls back on the trope that even if Moscow did try to influence the election, it failed to do so in any meaningful way. Again, this isn’t proof of collusion; it’s proof that this is a highly insecure individual who can’t countenance being overshadowed by anything or anyone, for good or ill.

Obama got Russia wrong when he was president; that’s inarguable. That was on him. Now it’s on Trump. 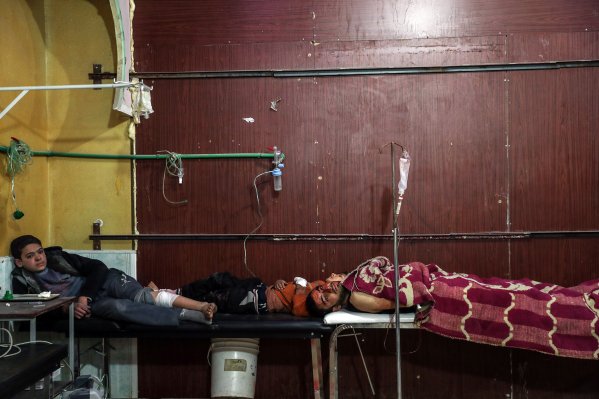