Michelle Wolf Is This Year's White House Correspondents Dinner Host. Here's Everything You Need to Know About Her.

On Thursday, the White House Correspondents’ Association announced their host for the annual WHCA Dinner: Michelle Wolf, a stand-up comedian and Daily Show with Trevor Noah correspondent who is about to become much more well-known. “Our dinner honors the First Amendment and strong, independent journalism,” the WHCA noted in their statement. “Her embrace of these values and her truth-to-power style make her a great friend to the WHCA. Her Pennsylvania roots, stints on Wall Street and in science and self-made, feminist edge make her the right voice now.”

Wolf follows last year’s host, Hasan Minhaj, and a historically impressive lineup of comedians, including Stephen Colbert, Conan O’Brien, and Jimmy Kimmel. Notably, she’s the fifth woman ever tapped to host the dinner. Tradition dictates that the president is the most high-profile attendee of the event; however, President Trump skipped the event last year. There’s no word yet on his plans for the evening of Saturday, April 28 this year. Here’s what you should know about rising comedy star Wolf.

She didn’t start out as a comedian

Wolf didn’t find comedy until well after starting her career. She studied kinesiology in college and was a track-and-field athlete at the College of William & Mary. After graduating in 2007, she went to work in finance in New York City, right before the 2008 recession. “I always loved comedy, but in my mind it wasn’t a viable career option,” she said in an interview with The Wrap. But that changed: she started taking improv classes after watching a Saturday Night Live taping and moved to an easier non-finance job so she could focus on improv and writing jokes on Twitter. “I would just read the news and tweet jokes about the news. It teaches you an economy of words,” she told the Daily Beast.

Seth Meyers, Trevor Noah, Chris Rock and Louis C.K. have all given her platforms

After getting fired at her previous job — since she was spending so much time distracted by comedy — she ended up landing a gig with Late Night with Seth Meyers in 2014, mostly working in the writers’ room. She eventually moved to the Daily Show in 2016, popping up onscreen in sketches and continuing as a writer. In her appearances on Trevor Noah’s show, she’s made quick work of finding the humor — and political commentary — in everything from sexual harassment allegations to Ivanka Trump’s approach to feminism. “Men don’t know anything that’s going on with women. You think you understand vaginas because sometimes you put your penis in one. That’s like me saying I understand engineering because I once drove through a tunnel,” she’s joked. And Noah has only had praise for her. “If we’re all normal people, she sees the code of comedy like Neo in The Matrix,” he told the Village Voice last year, calling her “pure comedy perfection.”

Chris Rock is also a fan: he tapped her to help write for him for his 2017 Oscars hosting gig and has had her as an opener on his 2017 tour. And Louis C.K. also gave her a platform, making her his opener during his 2016 comedy tour and featuring her as an actor in his web series Horace and Pete. (So chances are, even if you don’t know her face yet, you’ve heard her jokes before.)

She has plenty of experience with stand-up and shows

Wolf is a regular at New York City’s famed Comedy Cellar; for a while, she was trying to perform a show a night for years. She also hosted a 2015 web series, Now Hiring, which is available on YouTube via Comedy Central. And in 2017 Michelle Wolf: Nice Lady came out on HBO. It’s an hour-long stand-up ride that should give viewers a good introduction to her brand of cutting and timely comedy. In the special, she makes no qualms about satirizing the experience of being a woman in the world today. “I want equal pay — and a chardonnay,” she jokes, deadpan, about her brand of feminism. Nice Lady got glowing reviews from critics, too, and has a 92% audience rating on Rotten Tomatoes.

Netflix just snagged her for a new show

The popular streaming giant has added Wolf to their roster of stars, tapping her for a weekly late-night comedy show. Currently it’s still untitled and details are slim on the ground, but we do know that it’s slated to premiere at some point later this year. And don’t expect her to filter her jokes: “You can expect the types of jokes my former bosses would tell me we couldn’t do on TV,” she’s said about her Netflix plans.

She hasn’t hesitated to pull punches on powerful people

Wolf has been an advocate of feminist issues and liberal causes, but that hasn’t held her back from speaking her mind on popular personalities. “I do have a theory on why Hillary lost: I think it’s cause no one likes her,” Wolf jokes in her HBO special, going on to elucidate her reasoning: “You shouldn’t like Hillary. She’s a b—h. You have to be a b—h to be that powerful. We’re never going to have a nice lady run for president. Nice ladies aren’t in charge of things, and if you’re in charge of something and you think you’re a nice lady, no one else does.”

She’s also not a fan of Caitlyn Jenner (“I still f–king hate your personality”), Donald Trump (“I’d call Trump ‘petty’ but it’s too close to ‘pretty’ and he’s not good enough with words to understand the difference”), Steve Bannon (“At least Steve Bannon already looks unemployed”), or the NRA (“According to the NRA, if you’re worried about the flu, just buy a gun and shoot the flu away”).

And then there’s her Twitter, which is equal parts divisive and unifying in its observational humor.

She has a tendency to wear brightly-colored sneakers when performing stand-up. 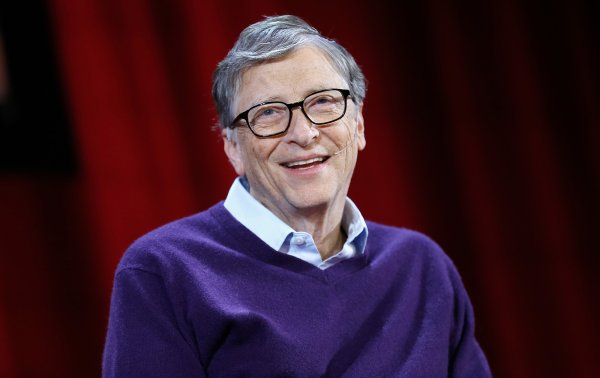 Bill Gates Fails Miserably at Guessing What an Average Person's Groceries Cost
Next Up: Editor's Pick