Mona Eltahawy is photographed in her home on April 12, 2015 in Cairo, Egypt.
David Degner—Getty Images
By Laignee Barron

Mona Eltahawy believes in the power of women’s rage. The Egyptian-American columnist and gender activist has defied death threats and detention to advocate for women’s rights in the Arab world. Last month, she started two viral social media campaigns — #MosqueMeToo and #IBeatMyAssaulter — that are adding new dimensions to the #MeToo movement.

Eltahawy is the author of Headscarves and Hymens: Why the Middle East Needs a Sexual Revolution, which details her experience of sexual assault at 15 years old, being covered head-to-toe and wearing a hijab, and groped while on the hajj, the annual pilgrimage to Islam’s holiest site in Mecca, Saudi Arabia. Under the hashtag #MosqueMeToo, she invited other women to join her in revealing the pervasiveness of sexual harassment experienced on the hajj and in other sacred Islamic spaces. Thousands of Muslim women came forward to share their own accounts of being groped, pinched, prodded and in other ways harassed.

Kicking up a second social media firestorm, Eltahawy also launched #IBeatMyAssaulter. After punching a man who recently tried sexually assaulting her in a club, she called on women to share testimonies of defending themselves and inspired an outpouring of stories from women who fought back against sexual predators.

Eltahawy spoke with TIME by phone from her home in New York City.

Why did you to start #MosqueMeToo?

Someone on Twitter sent me an article that described a young Pakistani woman’s Facebook post about being sexually harassed in Mecca. This was sadly familiar to me because I was sexually assaulted twice in Mecca during my first pilgrimage with my family in 1982 when I was 15. When I read this post I thought I’m glad more and more women are sharing their experiences because it took me a really long time to be able to say that I had been sexually assaulted at hajj. I started a thread in support and I asked women to share their own experiences using the #MosqueMeToo.

Read more: The Silence Breakers Are TIME’s Person of the Year for 2017

Why do you think women had mostly kept quiet about this?

Because of shame, and we had done nothing to be ashamed of. The shame belongs to the predator, not to the survivor. It’s so horrific to be sexually assaulted in any context. But to be sexually assaulted in a sacred context, your brain just kind of explodes because you think this surely has to be the safest place. Men who sexually assault women in sacred spaces, whether they are Muslim or Christian – and you see the hashtag #ChurchMeToo – these men use this tremendous power of silence and shame that the sanctity of the place gives them. They understand that women and children in these contexts will not speak out, because everyone in the community, Christian, Muslim, Jewish, Hindu, whatever, will want to shut down and defend the sanctity of their holy sites and their so-called holy men, rather than confront this terrible fact.

Did you feel there was a need to expand #MeToo to incorporate more Muslim women’s voices?

Absolutely. I feel that #MeToo in its current iteration is a very privileged, very white kind of thing. When the black feminist activist Tarana Burke started #MeToo in 2007, she was first to use it to express solidarity with fellow sexual assault and sexual violence survivors. There is a hierarchy of who gets attention and who gets heard and who is considered the so-called “perfect victim” and who has a platform. No one is voiceless, that is a ridiculous concept. So when we don’t hear people’s voices we have to ask why.

Have any of the stories that were shared in #MosqueMeToo surprised you?

There was one email I got from a Muslim woman who wrote to tell me of her mother’s experience with sexual violence in Mecca during hajj and she had written a poem for her mother. Her poem used the word “searing” one or two times. That word is so powerful and so appropriate because women’s stories are searing. I sent her a quote from one of my favorite poets, Muriel Rukeyser, which says, “What would happen if one woman told the truth about her life?/ The world would split open.” Muslim women who are sharing our stories on #MosqueMeToo are splitting the world open.

Let’s talk about the backlash you’ve been getting. Why do you think there’s been such defensiveness in response to #MosqueMeToo?

Because Islamaphobia exists. There is a demonization of Muslims. There are incredibly one-dimensional, monolithic, really boring, lazy stereotyping of Muslims. It happens across the world, and especially since the election of Donald Trump whose campaign was racist and Islamaphobic and bigoted and misogynist and homophobic. One of his main promises was to ban Muslims. Yes, there is a lot of sh*t thrown at us. And you get rid of it by having these discussions out in the open. When we do that, we strengthen our community.

You also started another social media campaign, #IBeatMyAssaulter. Could you talk about that?

My beloved and I went out dancing. We were having a great time. And then I feel this hand on my ass. I knew exactly who it was because we were surrounded by couples and there was one man walking away. So I grabbed at his shirt from behind, I tugged really hard and he fell. I sat on top of him and I just punched and punched. And all the time I was punching him I was yelling, “Don’t you touch a woman like that again, don’t you ever touch a woman like that again.” He finally got up and I smacked him right across the jaw. This man got years of rage that was building in me. As soon as I started posting what happened, so many women wrote to me and said, me too; I was in a club, I was at a bus stop, I was in school, I was here, I was there. So I said I’m going to put all these together under #IBeatMyAssaulter.

When I was 15 I just froze, and didn’t know what to do in Mecca because it was pilgrimage, because it was the first time I had ever been touched like that, with or without my consent. As I grew older, if I was to use paint to mark all the places on my body where I’ve been touched without my consent, my torso, front and back, would be totally covered in paint, and my genitals and backside too. As I grew older, I learned how to grab the hands of the men who did this to me. I understood that it was like this rock inside me that I had to shift. So I shifted it.

Is there a non-violent alternative?

It’s really interesting for me that under #MosqueMeToo there’s a whole bunch of men saying, “Why didn’t you make more of a fuss?” Under #IBeatMyAssaulter I have a whole bunch of men saying, “You made too much of a fuss. You were too violent.” Whatever a woman does she will always be victim-blamed. I’m at the moment right now where I’m saying, “Women, do whatever you need to at the moment.” This is self-defense.

What do you hope will be the lasting impacts of #MeToo and #MosqueMeToo?

I’m glad that #MeToo has come around again because it’s allowing a lot of women to share their stories. It’s allowing a lot of women to confront men, these men who have shaped our culture and our music and our economies. I really think this is a revolutionary moment. There is this building up of women’s rage. Men cannot sit back and say, “Well I’m not rich and powerful, that’s not me.” No. Everyone has to have this discussion with their friends, with their boyfriends. Men have to talk to each other. With #MosqueMeToo I hope we’re able to end this silencing and shaming of women who’ve been exposed to violence and abuse in sacred spaces and say that look, my body is sacred too. I’m hoping all of this is a reminder that whatever community you belong to, listen to women’s voices. 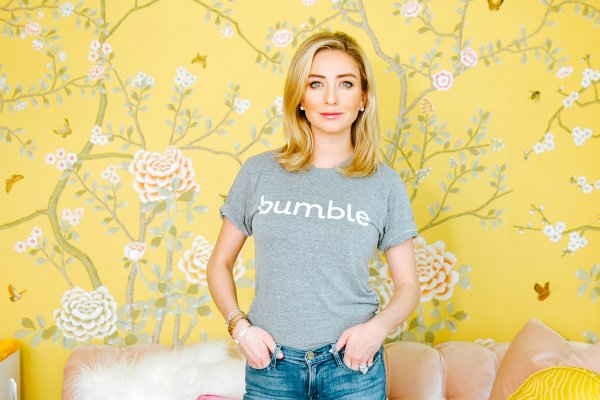 The CEO of Bumble on Why the App Banned Gun Photos
Next Up: Editor's Pick