The move that won the U.S. women’s hockey team its first Olympic gold medal in two decades is named, naturally, after a Britney Spears song. Jocelyn Lamoureux-Davidson, who grew up playing hockey on a frozen pond across the street from her house in Grand Forks, North Dakota, skated with the puck towards the net on Thursday at the Gangneung Hockey Centre, her team’s gold medal game shootout with Canada all tied up. She had a plan in mind. “Oops! … I Did It Again.”

A coach had nicknamed this maneuver, a bit of stick wizardry which she’s practiced thousands of times since her team blew a late 2-0 lead over Canada in Sochi, before losing in overtime and settling for silver. As Lamoureux-Davidson approached Canadian goaltender Shannon Szabados, she faked a shot to her right, already sending Szabados scrambling. In an instant, she brought the puck to her backhand. But just as soon as Szabados recovered from the initial fake, Lamoureux-Davidson juked her one more time, bringing the puck back to her strong side before punching it into the net. Szabados fell on her back, helpless.

“Oops! … I Did It Again.” After the game, Szabados just didn’t want to talk about it.

Lamouruex-Davidson pumped her right arm — bam — knowing that if U.S. goaltender Maddie Rooney could make just one more save, the gold medal would return to America. A teammate, Dani Cameranesi, called it the best shootout goal she’s ever seen. Who would argue? “Sick,” says forward Gigi Marvin. “Going back and forth. She could have burned her on the first one and gone backhand, but she was like, ‘no, why not really cap if off and make it look awesome?'”

Rooney — just 20 — saved the next attempt from Canada’s Meghan Agosta, and the Americans tossed their gloves in the air. Four years after the pain of Sochi, the U.S. avenged its hockey heartbreak on Thursday afternoon in South Korea, beating nemesis Canada 3-2 in an overtime shootout in the gold medal game. Hilary Knight — who like Marvin, Lamoureux-Davidson and her twin sister Monique Lamoureux-Morando also played on the 2010 team that lost to Canada in the gold medal game — started the scoring with a power play goal with just 26 seconds remaining in the first period, putting the U.S. up 1-0. Canada came rushing back in the second, with a pair of goals in just under seven minutes. But Monique Lamoureux-Morando tied the game with a breakaway goal in the third with just under seven minutes left, sending the game to scoreless overtime.

By rule, the Olympic gold medal game was now headed for a penalty shootout, an always imperfect tie-breaker. “A game like that should not be decided by a shootout,” says Canada forward Blayre Turnbull. The teams sat tied, at 2-2, after the first five shots. So the next team to score, and save the opponent’s return shot, would win.

Following the heroics of Lamoureux-Davidson and Rooney, Canadian defenseman Jocelyne Larocque removed her silver medal after receiving it at a post-game ceremony. For Canada, winner of the last four Olympic hockey tournaments, silver’s a sign of failure. Larocque couldn’t bear hanging such a heavy metal around her neck.

Many American players know the feeling. “You’re not running on the treadmill, wanting to throw up, and thinking, ‘yeah, second place,” said U.S. captain Meghan Duggan in an interview before these Olympics. Duggan’s another veteran of both the Vancouver and Sochi losses. “We know there’s so much more for us.” After beating Canada, Duggan called the win the greatest moment of her life three times, in a span of about a minute.

Madeline Rooney #35 of the United States tends goal against Blayre Turnbull #40 and Haley Irwin #21 of Canada in the first period during the Women's Gold Medal Game on day thirteen of the PyeongChang 2018 Winter Olympic Games at Gangneung Hockey Centre on February 22, 2018 in Gangneung, South Korea.
Harry How—Getty Images

The win capped off a momentous past year for the U.S. women’s team. Back in March, the American players threatened to pull out of world championships if USA Hockey did not provide improved salary and benefits for the women. The team reached an agreement with USA Hockey and played in the tournament, beating Canada 3-2 in overtime in the title game. The Women’s Sports Foundation awarded the players its Wilma Rudolph Courage Award.

The fight for equality bonded the team, and contributed to their success in competition. “What this group has been able to accomplish is way bigger than sports,” says Marvin. “That’s something that’s never going to fade.”

Helping lead that charge for equality were the Lamoureux twins, 28, who years after brawling with her four older brothers on the ice across their North Dakota street, scored the game-tying (Monique) and game-winning (Jocelyn) goals during one of the signature moments for America at these Olympics. Their father Pierre, a former goaltender at the University of North Dakota, offered his daughters simple instructions when they started playing against boys in town. Find the biggest kid on the ice, and put him on his ass. “They had to make a statement,” Pierre once told TIME in an interview. “Do something to get noticed. The mothers would get mad. The fathers, deep down, wished their sons were doing the same thing.”

The twins developed a bit of a reputation as enforcers. During an exhibition game at the University of North Dakota — their alma mater — before Sochi, they brawled with Canadian players in front of a delighted hometown crowd. “They are the best fighters I’ve ever been around,” says Marvin. But their stickwork, honed over years of training, won America its hockey gold medal.

Almost immediately after the game ended, Jocelyn wrapped herself in an American flag she had brought to South Korea; it had been sitting in a locker stall in Tampa, the team’s training base, for seven months, waiting to be unveiled. “I knew we were going to proudly wave this flag,” Jocelyn says. “There was just no doubt in our team and what we can accomplish.” She beamed in the hallways of the hockey arena, while showing off her gold medal. “I’m digging the new necklace I got today,” says American’s latest Olympic star. “I’m not going to take it off for awhile.”

Ooops, Jocelyn did it again. So America now rules the ice. 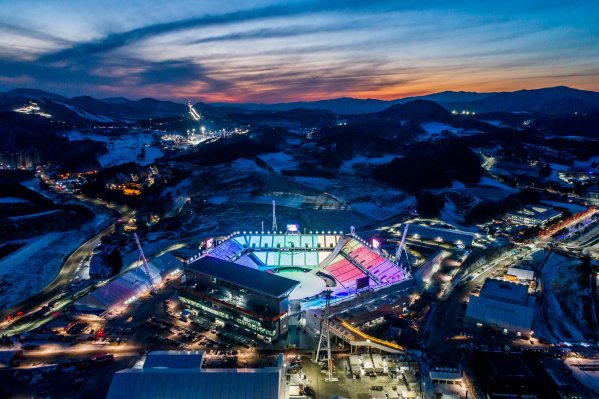 How to Watch the Olympics Closing Ceremony
Next Up: Editor's Pick