Wayne LaPierre, the National Rifle Association’s Executive Vice President, told the Conservative Political Action Conference Thursday that politicians and the media are exploiting the Florida school shooting to expand gun control and ultimately abolish the second amendment, striking a defiant tone in his first public remarks since the mass shooting that killed 17 people and reignited the gun control debate in the U.S. to a fever pitch.

Although LaPierre spoke at CPAC, his name was not on the public schedule and his speaking slot details had not been finalized—at least publicly— as of Wednesday afternoon. The Washington Examiner reported that CPAC organizers had left LaPierre’s name off the speakers’ list following last week’s shooting at Marjory Stoneman Douglas High School in Parkland, Fla., and NRA officials were not providing details as of Thursday morning.

“It’s not a safety issue, it’s a political issue,” LaPierre said. “They care more about control. Their goal is to eliminate the Second Amendment and our firearms freedoms so they can eliminate all individual freedoms.”

“They don’t care if their laws work or not,” he added. They just want get more laws to get more control over people. But the NRA, the NRA does care.”

Five years ago, in the aftermath of the shooting at the Sandy Hook Elementary School in Newtown, Conn., the NRA responded by urging more armed security at schools, a similar tack to Trump’s suggestion Wednesday at a listening session for school shooting survivors at the White House, and again Thursday morning in a series of Twitter posts.

LaPierre had similar words of advice on Thursday, urging people interested in investing in school security to look up the NRA’s School Shield program, rhetoric that was similar to his speech at CPAC in 2013, a few months after the Newtown shooting.

“To protect our children at school, we recommend a trained professional with a gun. They recommend scissors. And they say we’re crazy? That’s sheer madness,” LaPierre said at the time. “Here’s what the political elites offer instead — a placebo called ‘universal’ background checks.”

He concluded this year’s speech by reiterating the advice he provided in the wake of Newtown five years ago: “The only way to stop a bad guy with a gun is a good guy with a gun.”

This time though, the speech was not just about guns and the Second Amendment. LaPierre used the opportunity to critique other facets of government and society — everything from leaks in the intelligence community to alleged bias in the media to universities that he said were spearheading a socialist revolution by emphasizing the teachings of Karl Marx. At one point, he said the country was trending toward a “growing socialist state.” And at times, particularly when he was discussing the media and the FBI, his tone and rhetoric sounded remarkably similar to President Trump’s.

“Some people think the NRA should just stick to its Second Amendment agenda and not talk about all of our freedoms,” LaPierre said. “But real freedom requires the protection of all of our rights. And a Second Amendment isn’t worth its own words in a country where all individual freedoms are destroyed.”

LaPierre was preceded on Thursday by NRA spokeswoman Dana Loesch, who was at CPAC just hours after appearing on a CNN town hall on gun violence with survivors and families of victims of the Florida shooting. Loesch, who said she had to be escorted out by security after the event, also criticized media’s coverage of mass shootings, noting that the focus often intensified when the victims were wealthy and white.

“Many in legacy media love mass shootings,” Loesch said. “I’m not saying you love the tragedy. But you love the ratings.” 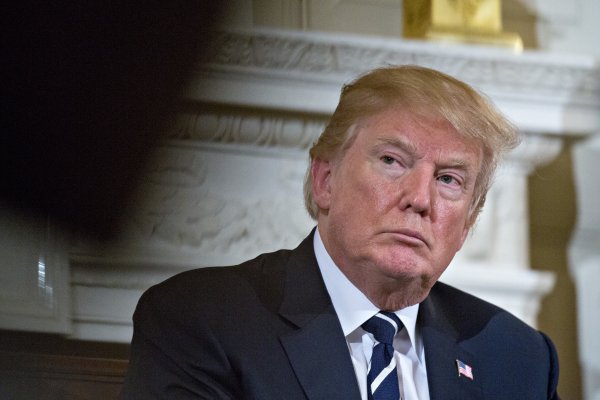 Trump Tries to Clarify His Suggestion That We Should Arm Teachers to Prevent School Shootings
Next Up: Editor's Pick