At the death of a patriarch, it is only a natural moment to compare the son to his father.

America’s most famous preacher, Billy Graham, rose to the heights of religious power in America by uniting evangelicalism after a fundamentalist crisis in the early 20th century. His son, Franklin Graham, the heir to his religious empire, has risen to prominence by embracing the divisions of our time. The difference between father and son says as much about America as it does about the two men.

The elder Graham’s death at age 99 on Wednesday prompts a moment of particular soul searching for millions of evangelicals across the nation. Graham was diplomat, statesman, and personal counselor to presidents since Dwight D. Eisenhower. He single-handedly made evangelicalism relevant in the highest halls of power and in every nation across the globe. As Pope John Paul II was for Catholics, Graham was a beloved family member for evangelicals who shaped their daily lives around devotion to Jesus. He stood for unity across Christian traditions and across political divides. He represented gentleness, and he asked nations to be better.

Franklin, 66, rose to political prominence in recent years as Billy Graham disappeared from public life to his home in the North Carolina mountains to finish out his days. Franklin has been the elder Graham’s successor, and for the past two decades has run his dad’s Billy Graham Evangelistic Association and the international humanitarian organization Samaritan’s Purse.

The younger Graham, called by his father’s middle name, is known for his harsh words on Islam, gay marriage and the leaders of the Democratic Party. He says he does not care who he offends if he thinks he is right. He champions President Donald Trump and harnessed his followers to do the same. Most often, it is hard to imagine his words ever coming from the lips of his father. “President Obama doesn’t have any clue about the Christian faith,” Franklin told TIME during the 2016 presidential campaign. “That is why he gets behind these things that people have influenced him into, which is this big social agenda, and is to promote same sex marriage, homosexuality.”

But the differences between father and son may be less about the two men than the movements of their time. Billy and Franklin each reveal something bigger about his own generation. Each man shaped his time, but each also responded to it.

Graham’s death is the end of an era in American evangelicalism and in the country at large. Evangelicalism has lost its senior statesman, its unifying figure. That role was a given in America for much of the past century. But the American evangelical church was changing before Billy died. Billy’s church is not the church of his children. Franklin’s America is increasingly a godless generation. More than a third of millennials identify as religiously unaffiliated, more than any previous generation, according to the Pew Research Center. Only 41% of millennials say that religion is very important to them, compared to 72% of the greatest generation. The youngest generation of evangelicals is increasingly diverse, and more open to gay marriage than their elders are. They are more likely to see immigrants as a force for good, and more likely to be politically independent.

Ironically, Billy gave evangelicals a vision beyond the fundamentalism that had taken hold during the evolution and creation debates and the Scopes Trial of 1925. Now pendulum of the culture has now swung back, and evangelicalism in politics has again taken a more fundamentalist turn. Trump’s rise perhaps demonstrates this better than anything else. The white evangelical base that for decades looked to Billy for inspiration splintered in the 2016 election, after many of its young people supported Obama in 2008. Prosperity gospel and Pentecostal pastors found newfound political power in attaching themselves to Trump’s rise. The culture wars relaunched, and American evangelicals fought over everything from race and women to immigration and leadership. Franklin is a product of this culture even as he is a shaper of it, just like his father was in his own time.

This shift is about more than just the church. America itself is increasingly fractured. The nation resists institutions and their leaders across the board, not just in matters of religion. Beyond Pope Francis, in religious communities it is especially difficult to imagine giants of leadership taking hold the same way the did during the era of Billy Graham or Martin Luther King Jr. Billy himself faced criticism later in life, especially for his comments about Jews caught on tape in conversation with Nixon.

In the immediate wake of Billy Graham’s death, evangelicals mourn the death of a hero, but also of the idea that such a hero may be possible again. They face the question: what spiritual leadership, if any, will their culture produce in time ahead? 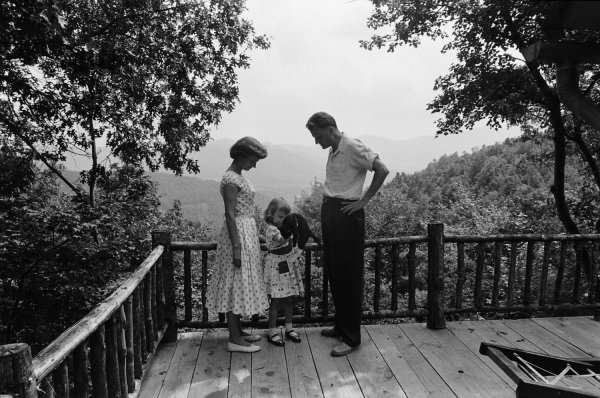 Billy Graham at Home: Rare Photos From the LIFE Archives
Next Up: Editor's Pick