The Billy Graham I Knew

Ideas
By A. Larry Ross
Ross is president of A. Larry Ross Communications; for more than 33 years, he served as personal media spokesperson for evangelist Billy Graham, and is curator of the Billy Graham Legacy website and YouTube channel.

A common journalistic axiom recognizes that a story becomes newsworthy if it contains one or more elements of familiarity, impact or oddity. The death of renowned evangelist Billy Graham, who passed peacefully in his sleep early this morning at the age of 99, contains all three. Familiarity, as a worldwide symbol of evangelism who gained the respect of leaders of other faiths across four generations and a senior statesman for an inclusive view of the Christian experience focused around the centrality of Jesus. Impact, considering he preached the Gospel of hope and salvation to more people in live audiences than perhaps anyone in history, nearly 215 million people in 185 countries and territories, plus countless millions more via satellite, television, radio, publishing and the Internet, according to estimates from the Billy Graham Evangelistic Association. And oddity, that a country boy born on a rural dairy farm near Charlotte four days before the armistice ending World War I and grew to love baseball and girls, rose from obscure roots to become “America’s Preacher” and “Pastor to Presidents” throughout a ministry spanning six decades.

For more than 33 years — over half of his public ministry — I had the privilege of serving as personal spokesperson and media representative for Billy Graham. His deep impact as a principal colleague and spiritual mentor taught me that the life one leads is more important than the mere words one says. On countless occasions, I observed that he did much more than just preach the Gospel — he lived it.

Many analytical pieces will be written about the influence and impact of this lion of the faith who maintained his roar until the very end. But my reflections are anecdotal, based on several photos that hang in my office, which provide insight into Mr. Graham’s faithfulness to his calling and intuitive character traits reflecting a standard of excellence and best practices for every person of faith.

Harry Benson, the renowned photographer, is best known for his iconic photos of the Beatles mid–pillow fight in Paris and their final glance back as they disembarked at JFK Airport to begin their first U.S. tour in 1964. He once told me that everywhere the Beatles went, there was chaos. The only two safe harbors were their hotel rooms and their limousine.

In some respects the same thing was often true for Billy Graham, though in most others he was the antithesis of a rock star. His favorite food was a McDonald’s hamburger — a dependable consistency in a life of constant change for a man who traveled the world preaching the Gospel. But the popularity of his record-setting stadium crusades and the infectious power of his message made him one of the most recognizable faces on the planet, often forcing him to take service elevators or exit through convention hall kitchens to get past the crowds.

Unlike most of us, who upon checking in to a hotel room open the window curtains to let in the light, Mr. Graham would initially close the drapes. Seclusion was rare in his life, and he welcomed the sanctuary from a constant presence on the world stage and the opportunity it provided him to quiet his thoughts and speak to God. He sustained that resulting inner peace everywhere he went, regardless of the surrounding circumstances.

I have often heard people say, “I can’t do that, I’m not Billy Graham,” in reference to boldly lifting up the name of Jesus, sharing their faith or exhibiting behavior consistent with their beliefs. There is no doubt he was a great preacher. But his power and authority did not come from his considerable ability. It came from his availability to be used by God, Who honored his faithfulness. I once accompanied Mr. Graham to CNN studios in Atlanta for a live global network television interview on a controversial international issue in 1991. As I watched from the control room prior to the telecast, I observed him chewing his fingernails, understandably nervous, as he wanted to choose his words carefully to avoid misrepresentation. Then, he bowed his head in prayer, committing what he knew he couldn’t do on his own to the Lord in search of divine wisdom, allowing God to speak through him.

I first learned about Mr. Graham’s “audience of One” during a live interview I set up for him on NBC’s Today in the fall of 1984. Assuming he would want to have a time of prayer before going on the air, I requested a separate alcove adjacent to the “green room” for the evangelist to commit the opportunity to the Lord.

When we arrived at the studio, I informed Mr. Graham’s associate what I had arranged. My colleague smiled and explained, “When Billy got up this morning, he started praying in his room; he prayed during breakfast and in the car on the way over to the studio; he is praying right now and will continue throughout the interview. Let’s just say that Billy keeps himself ‘prayed up’ all the time.”

Since his early days as a youth evangelist with the mantra, “Geared to the Times, Anchored to the Rock,” Billy Graham preached a timeless message in a timely way, through biblically based and socially relevant sermons. Often in crusade cities, reporters would observe it was as if Mr. Graham preached with a Bible in one hand and a newspaper or news magazine in the other. He not only put the Gospel in a cultural context, but also would show how the Bible speaks to personal and societal problems.

Mr. Graham was the same person one-on-one over dinner as he was in a crusade pulpit or on television. Though he served as spiritual confidant to some of the world’s most influential leaders in government, entertainment, sport and business, he was able to connect with anyone — especially airport porters, hotel maids or restaurant waitpersons — and made anyone in his presence feel important.

The night before he was to speak at the dedication ceremony for the new Mayo Clinic in Jacksonville, Fla., in early October 1986, I joined Mr. Graham for dinner in the restaurant at his hotel, where he had stayed on so many occasions that the staff knew him well. When it came time to order our food, the waitress — an elderly African-American woman with a huge personality, but obviously new to the facility — said to him, “Do you know who you look like?” He replied, “No, who?” She said, “Billy Graham.” He asked in return, “Do you mean the preacher?” And she retorted, “Yes sir, you look just like Billy Graham!” and disappeared into the kitchen to place our order — and inform the chef of the coincidence. Mr. Graham was immediately chagrined by having a little good-natured fun at her expense, and so when she returned, he said, matter-of-factly, “Well, I need to tell you that actually, I am Billy Graham.” The initially effervescent woman became immediately indignant and shouted, “No you aren’t, you’re not Billy Graham!” She was so adamant that he had to pull out his driver’s license to prove that he was.

Mr. Graham was modest, unassuming and lacking of any self-importance, leaving the results to the Lord to Whom he gave all the glory and honor for any accomplishments. One of the distinctive traits of his ministry was that he made positive points for the Gospel in any media situation, and in doing so God honored his faithfulness. Mr. Graham never sacrificed the long-term viability of ministry influence or nuance for the sake of short-term visibility of media publicity and promotion. Rather, he understood and cultivated the character and calling that came with his station, seeking platforms for his message, not publicity for his ministry. He viewed interviews not as opportunities for self-promotion, but as a faithful steward of the calling on his life to communicate biblical truth and a necessity to extend his message beyond audiences that attended his crusades.

In Corinthians 2:3–5 (NIV), the Apostle Paul explores the principle of spiritual strength amidst physical fragility: “I came to you in weakness with great fear and trembling. My message and my preaching were not with wise and persuasive words, but with a demonstration of the Spirit’s power, so that your faith might not rest on human wisdom, but on God’s power.”

The same could be said of Billy Graham, who struggled with health afflictions throughout much of his career. On many occasions during a crusade or other ministry and media events, I saw him lose his voice or became physically weak or ill, having nothing humanly left to give. But when it came time to preach the Gospel, the evangelist would become imbued with a supernatural energy in the pulpit — a strength that could only have come from God — often collapsing again at the conclusion of his sermon.

Billy Graham had an unprecedented front-row perspective, access and influence over the colliding worldviews of the Christian faith and the Zeitgeist. He was not judgmental, recognizing that only God knows the contents of a human heart. He remained faithful in his presentation of the Gospel of God’s love, which he wholeheartedly believed and practiced in the public eye, while strengthening others in their personal faith.

As the world reflects on Mr. Graham’s passing, for many it will not be a time of mourning, but rather of celebration — of a life well-lived, a Lord well-served. His is a legacy of the present, not the past, which lives on in the leaders he influenced and the countless changed lives who responded to his transformational message, the likes of which we will not see again in our generation. 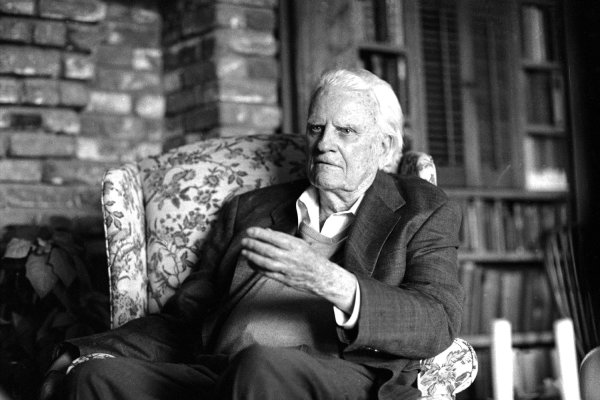 Photos From the Life of Billy Graham, Counselor to Presidents and Preacher to Millions
Next Up: Editor's Pick