Elizabeth Wurtzel: Giving Up Drugs Was the Hardest Thing Ever. And I Have Cancer

Elizabeth Wurtzel, author of the memoir 'Prozac Nation', poses for a photo in front of a window display of a hand holding pills on August 14, 1991 in New York City.
Catherine McGann—Getty Images
Ideas
By Elizabeth Wurtzel
Elizabeth Wurtzel is the author of Prozac Nation, Bitch and More, Now, Again. Her latest book is Creatocracy: How the Constitution Invented Hollywood.

Because I overcame addiction, my life is easy.

Getting drugs out of my life is the hardest thing I have ever done, and I like difficult. You might say that difficult is my thing. I write books, which is the most difficult thing you can do sitting down — and I would not want to try it standing up. Every book has been the labor of the Israelites in Mizraim.

So I go for tough. But giving up drugs was the hardest thing ever.

If I had not been in a 72-hour hold the first time I tried, it would not have happened. Of course, it never works the first time. Relapse is part of quitting. It’s in and out, back and forth. Only the resilient-as-all-get-out get through. You have to keep trying. I know a lot of people who died because they could not go on without heroin, and they did too much or they got some bad stuff. Dope-sick people who are desperate have bad judgment. They are guided by their sweats. A drug epidemic is always a death march.

I spent four months in Silver Hill Hospital in New Canaan, Connecticut, during the winter that ran across 1997 into 1998, trying to get away from cocaine. I ate caviar from the Russian Tea Room in rehab on New Year’s Eve when I was 30. My agent sent it, which was kind. Me and everyone in the chemical-dependency ward, junkies still shaking with the D.T.s, sat there that night digging into Beluga and watching nature shows on TV.

I got clean that way. And the day I got out, I used. I used to see if I still could, now that I was better. That is what addicts do.

I snorted coke all night in my garret apartment in the West Village, with the alleged illegitimate son of a famous actor, who I met on a flight from Miami to JFK before I checked in. Of course I did.

I went back and forth with cocaine for many months. I kept going to AA and NA. I got into a day program for substance abuse in a midtown hospital. There were homeless people in it, and Liza Minnelli. Also the usual anesthesiologists and airline pilots that make you realize we live in a dangerous world.

Addiction is an ailment that belongs to people whose problems take over the world. If you hate the junkie you know, I do not blame you. We are the worst or we would not be doing this. Blame doctors, blame pharmaceutical companies, but finally why are addicts unable to take life straight? If you can’t get through without a chemical adhesive, it is on you.

Oh, I get the seduction. If you don’t, you should. Drugs are intimate. They are inside of you. No human being could be that close. Who would want to be? Addiction is a love story, or it would not survive the desperation. When I used, it made me so happy to know my only concern was getting high. I did not care about anything or anyone. I could not believe people expected anything at all from me. There is no point trying to get through to an addict. Stop trying. Drugs are too powerful. You will not win. Your husband definitely loves his drugs more than he loves you. That’s why he’s a junkie.

I did recover. I got clean Sept. 11, 1998, which was a very long time ago. I believe it is because I have a lot to live for. I mean: I like difficult. Maybe that makes me a Twelve Steps type. It is a hard program to learn to like, but once you get it, it is the answer. I actually feel sorry for people who have no occasion to bring this wisdom into their lives. There is no way to explain to an outsider the brilliance of surrendering your will to a higher power — if only everybody could learn to do this. (Please. Soon.)

Because of what I know from going to meetings and practicing the Twelve Steps, my life is easy. I now have advanced breast cancer, which most people would not take well. But I am good. I don’t think about the past or the future — I don’t even worry about the present. I just do the next right thing.

My first year clean, the whole world was flecked in gold and coming at me. I never felt so much as I did then. My brain was shivering. My eyeballs were compasses swinging wildly in search of a way. I prayed to whatever was out there. I got on my knees and cried for help.

Every day that I did not use was a miracle.

I felt awful, but I lived in miracles and wonders. Sometimes, I miss being that alive.

Anyone who gives up drugs could get that. 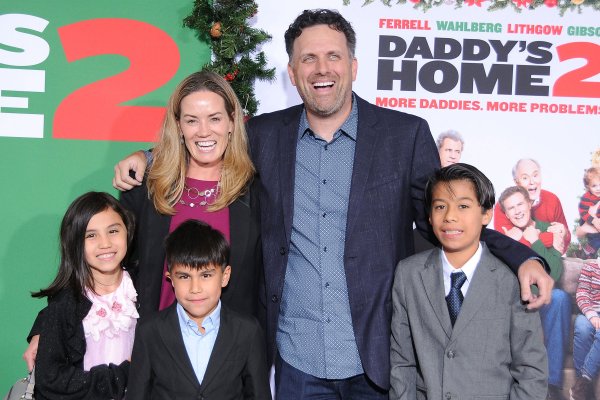 'Daddy's Home' Director on Foster Parenting: 'We Thought We'd Made a Horrible, Horrible Mistake'
Next Up: Editor's Pick