The Duke of Edinburgh dances with his wife, Princess Elizabeth, at a square dance held in their honour in Ottawa, by Governor General Viscount Alexander, Oct. 17, 1951. The dance was one of the events arranged during their Canadian tour.
Keystone/Hulton Archive—Getty Images
By Flora Carr

In spring 1947, a first-time visitor to London described the capital as “a decaying, decrepit, sagging, rotten city.” The after-effects of World War II were still being felt: buildings were puckered with shrapnel scars, wartime rationing continued, and the shortage of housing following the Blitz meant that many returning soldiers found themselves homeless.

In short, London was in dire need of cheering up.

Relief came in an unexpected form, with the arrival of Oklahoma!, the quintessentially American musical by legendary duo Richard Rodgers and Oscar Hammerstein II, which this year celebrates its 75th anniversary. Following a runaway success on Broadway, where it opened March 31, 1943, Oklahoma! had its West End debut in April of 1947. It was the first American musical to travel to London after the war. Outside the theater, London was “cold and foggy”; inside, however, the set was Technicolor bright and the musical score bounding with energy.

And while the British audiences found themselves enraptured by the onstage cowboy love story, a royal romance was playing out in the theater.

The play opened on April 30, 1947 at the Drury Lane Theatre, to 14 encores and an hour of curtain calls. Tickets were in high demand; Gemze de Lappe, a dancer in the original London show, told the BBC: “The Oliviers came [Laurence Olivier and his second wife, Vivien Leigh] and Noel Coward — anyone who was anyone wanted tickets.”

However, on opening night, the guests of honor were none other than the royal family: King George VI, his wife the Queen, Princess Margaret and her older sister Princess Elizabeth. The family reportedly loved music and singing, with both princesses performing in pantomimes at Windsor Castle during the war. And accompanying the family at the theater that night was a dashing foreign prince: Prince Philip, the future husband of Princess Elizabeth, who later became Queen Elizabeth II.

At the time, the royal couple were not yet engaged — but the princess was already smitten. As third cousins, they had first met as children in 1934. However, it was in 1939, when Elizabeth, 13, and Philip, 19, met again in Devon, England, that the princess first fell in love, according to Sir John Wheeler-Bennett, King George VI’s official biographer.

“Their early ‘romance’ was a relatively distant one, given that Philip was in the Royal Navy and away a lot of the time,” Christopher Warwick, royal biographer and author of Her Majesty, tells TIME.

However, Oklahoma! played a vital role in the early courtship of Princess Elizabeth and Prince Philip. In particular, the song “People Will Say We’re In Love” came to hold special meaning.

“It was a song that ‘sung’ to them – their song if you will,” Warwick says.

The duet “People Will Say We’re In Love” was performed in the original London production by Betty Jane Watson as Laurey and baritone crooner Howard (then Harold) Keel as Curly. Keel was a particular hit in London, and went on to appear in classic musical films such as Calamity Jane and Annie Get Your Gun.

In the song, Laurey and Curly discuss how to avoid the whole town thinking they are in love with one another.

The later writings of Marion Crawford, who was nanny to the princesses Elizabeth and Margaret in the 1930s and ’40s, reveal why the song would have struck a chord during the early romance between Prince Philip and Princess Elizabeth.

“Prince Philip was back from the war. One evening, he had dinner with the Princesses. After that, I noticed, Lilibet [Princess Elizabeth] began to take more trouble with her appearance, fretting over what to wear. The next day, I’d discover she’d dined with Philip,” she wrote. “I also noticed that she began to play her gramophone more than usual, and that her favourite tune was ‘People Will Say We’re In Love’, from the musical Oklahoma! — which she’d seen with Philip.”

Crawford wrote that when the young couple began dating, Elizabeth “would often ask the band” where they were dining “to play the number for her” to dance to with Philip. The significance of a song about a young couple trying – and failing – to conceal their feelings towards each other from the outside world wasn’t lost on Crawford. At the time, Princess Elizabeth and Prince Philip were also attempting to hide their romance from the British press. In one example, the 19-year-old Princess tells Crawford that a factory visit was “horrible” because the press kept shouting at her to ask where Philip was.

But the relationship didn’t stay secret for too much longer. Just months after they saw Oklahoma! together, on July 9, 1947, the couple got engaged. They married four months later, on Nov. 20.

The significance of the musical, and the song that once “sung to them,” lasted. In 2013, composer Andrew Lloyd Webber held birthday celebrations for the Queen, and was given access to the Queen’s list of favorite tunes. He revealed in the British press that one of the songs was Rodgers and Hammerstein’s “People Will Say We’re In Love” — over 60 years after the couple first saw Oklahoma! together. 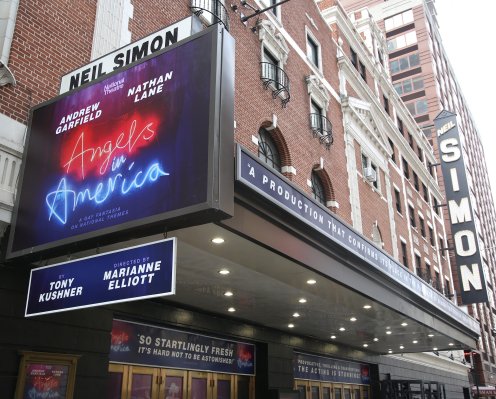 How 'Angels in America' First Reminded the World That 'Plays Can Matter'
Next Up: Editor's Pick