President Donald Trump’s endorsement of Mitt Romney’s U.S. Senate campaign in Utah may have come as a surprise to some given their complicated history.

Trump and Romney have had a roller-coaster relationship for years, often throwing insults at each other in times of distress — and exchanging pleasantries when mutually beneficial.

Here’s a history of Trump and Romney’s rocky relationship.

“Donald Trump has shown an extraordinary ability to understand how the economy works,” Romney said, adding, “it means a great deal to me to have the endorsement of Mr. Trump.”

As the 2012 presidential election approached, Trump took to Twitter, calling on Americans to vote for Romney, posting videos and quotes from the candidate and lauding his performance in debates against former President Barack Obama.

After Romney’s loss to Obama, Trump tweeted that Romney “is a good man but he just never connected with the people.”

Amid rumors that Romney would run for president again in 2016, Trump tweeted that Romney “had his chance and blew it.”

After Trump announced he would run for president, Romney criticized Trump’s remarks on Mexico and undocumented immigrants — saying that the comments hurt the Republican Party.

“I think he made a severe error in saying what he did about Mexican-Americans,” Romney said, according to CNN.

Trump responded by pointing to Romney’s loss to Obama in 2012.

In a speech at Georgetown University, Romney said he “would have never predicted” that Trump would be leading his party, according to the Washington Post. He also predicted Trump would not become the Republican presidential nominee.

He added that while he found Trump’s popularity to be a positive for the party, his rhetoric was a negative.

“The negative side is that he’s said some things that he described the other day as being ‘childish,'” Romney said. “I’m afraid he brought attention to [immigration] in a way that was not productive and not appropriate in saying the things he did about Mexican-American immigrants.”

Before Trump secured the GOP nomination, Romney said the remaining three Republican candidates should release their tax returns, noting that there may be a “bombshell” in Trump’s.

Trump then responded by saying Romney’s “tax returns made him look like a fool,” and pointed to his endorsement of the 2012 candidate, saying Romney “was so awkward and goofy” back then.

The war of words then continued on Twitter on Feb. 25, with Trump calling Romney a “dope” and sharing a photo in which he said he was signing “a recent tax return.”

Romney retorted with the hashtag “#WhatIsHeHiding.”

In a wide-ranging, scathing speech against the then-presidential candidate, Romney criticized Trump on everything from his temperament to his economic plan to his foreign policy experience.

“Here’s what I know. Donald Trump is a phony, a fraud,” Romney said at the University of Utah. “His promises are as worthless as a degree from Trump University. He’s playing the American public for suckers: He gets a free ride to the White House and all we get is a lousy hat.”

Just hours after Romney’s speech, Trump responded at a rally in Maine by pointing to his endorsement of Romney in 2012. “He was begging for my endorsement,” Trump said. “I could have said, ‘Mitt, drop to your knees.’ He would’ve dropped to his knees.”

Trump double-downed on his criticism of Romney, calling him a “failed presidential candidate” who “choked and let us all down.”

After the Washington Post published the infamous 2005 Access Hollywood tape, in which Trump bragged about groping women without their consent, Romney took to Twitter to blast the presidential candidate.

Romney tweeted well-wishes to Trump after he won the 2016 presidential election.

Days later, Trump said Romney called to congratulate him for his win.

Romney visited the Trump National Golf Course in Bedminster, New Jersey, where the then-president elect was considering candidates to fill his Cabinet.

“It was a warm and a substantive exchange,” Pence said, confirming Romney’s consideration for the role of Secretary of State.

Romney and Trump dined in New York City as Trump considered Romney for one of his top Cabinet positions. Romney told reporters after the meeting that Trump was “the very man who can lead us,” according to Reuters.

“We had another discussion about affairs throughout the world and these discussions I’ve had with him have been enlightening, and interesting, and engaging,” he said at the time. “I’ve enjoyed them very, very much.”

After a white nationalist rally ended with the death of a counter-protester in Charlottesville, Va., Romney criticized Trump’s response, demanding that the president apologize.

“Whether he intended to or not, what [Trump] communicated caused racists to rejoice, minorities to weep, and the vast heart of America to mourn,” Romney said in a Facebook post. “The president must take remedial action in the extreme. He should address the American people, acknowledge that he was wrong, apologize. State forcefully and unequivocally that racists are 100% to blame for the murder and violence in Charlottesville.”

In Trump’s response to the violent event, he said there is “blame on both sides.”

Trump endorsed Romney for his U.S. Senate bid, saying he would make a “great Senator.” Romney — who had previously said he would not have accepted Trump’s 2012 endorsement if he knew what he knows now about Trump — thanked Trump for the endorsement. 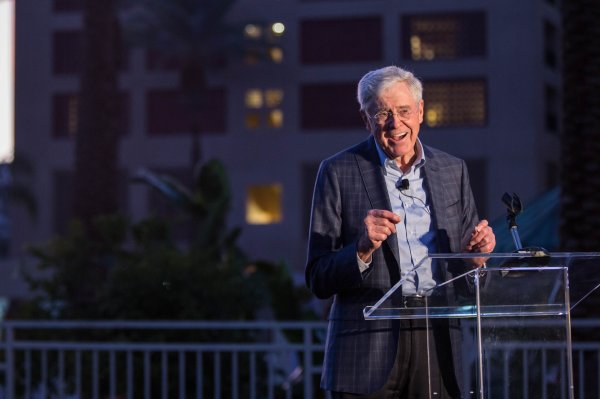 The Kochs Think the Midterm Elections Will Be Brutal
Next Up: Editor's Pick