In an unusual twist, both the German and Canadian two-man bobsled teams won gold medals at the PyeongChang 2018 Winter Olympics after finishing with exactly the same times, down to the hundredth of a second.

The team of Francesco Friedrich and Thorsten Margis of Germany were apparently an absolutely perfect match for the duo of Justin Kripps and Alexander Kopacz of Canada in their event at the Olympic Sliding Center on Monday. They were followed by Latvian bobsledders Oskars Melbardis and Janis Strenga, who took bronze.

Justin Kripps and Alexander Kopacz of Canada celebrate as they win joint gold during the Men's 2-Man Bobsleigh on day 10 of the PyeongChang 2018 Winter Olympic Games at Olympic Sliding Centre on February 19, 2018 in Pyeongchang-gun, South Korea.
Alexander Hassenstein—Getty Images

With the top five teams separated by just 0.13 seconds on the fourth and final run — the bobsled medals are awarded based on cumulative time over four slides down the icy chute — it was going to be a close finish regardless. But the ultimate shocker was that both the Germans and Canadians ended up with that identical time.

The last time two teams tied for Olympic gold in the two-man bobsled event was back in 1998, between the Canadians (again) and the Italians. (To combat this problem, luge has already converted to scoring speed to the thousandths of a second.)

Francesco Friedrich and Thorsten Margis of Germany reacts in the finish area following their final run during the Men's 2-Man Bobsleigh on day 10 of the PyeongChang 2018 Winter Olympic Games at Olympic Sliding Centre on February 19, 2018 in Pyeongchang-gun, South Korea.
Lars Baron—Getty Images

Naturally, the internet couldn’t help but be surprised with the result. In particular, people love that the Germans were so thrilled with the tie that they were the first to run over and congratulate their Canadian fellow medalists, proving that good sportsmanship at the Olympics is alive and well. 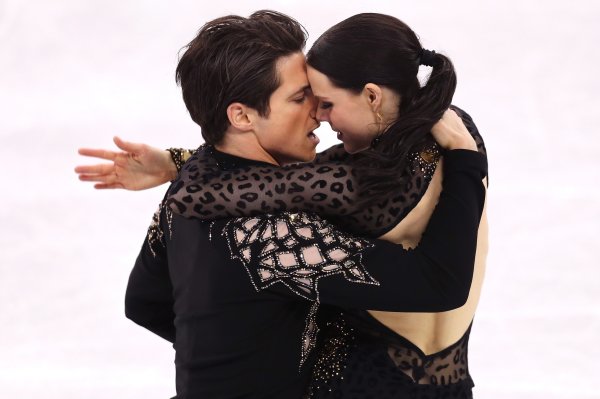 We Could See An Incredible Olympic Ice Dancing Achievement Tonight
Next Up: Editor's Pick