The Bachelor Recap: It's Time for Hometown Dates

Welcome back to The Bachelor. Arie’s time on The Bachelor is drawing to a close and he has winnowed down his herd of Beccas and Laurens to just four women. Next week, he will take three of them to the Fantasy Suites. However, before he can enjoy that particularly public pleasure, he has to meet-and-greet the families of the four women he is simultaneously dating and hope he survives.

Kendall has not gone on a single date with Arie, but that doesn’t mean they won’t be engaged by the end of Arie’s run on The Bachelor. Arie swears that he really likes Kendall, and if you wanted to get drunk by the end of the episode, just take a swig every time Arie calls Kendall “quirky.” To prove that she is, in fact, quirky, a producer suggests she take Arie for a romantic date to put some skin on some rats. Yep, in a Bachelor first, the couple makes taxidermied rats together and soon Rat Arie is giving Rat Kendall a rose. At least no one tries to explain how taxidermy is like love or marriage.

Later, Kendall takes Arie home to meet her twin, Kylie, (in their defense they are older than the Kardashian sisters). Kendall and her mom talk about love. Arie and Kendall’s dad talk about love (he’s skeptical, like any good dad whose daughter is looking for love on a reality show). Kendall’s sister grills Arie about love and he swears he likes her sister a lot, but doesn’t admit he never once invited her on a date. Kylie confesses that she isn’t convinced about any of this, but if Kendall really likes Arie, she really needs to tell him, which is some surprisingly sound advice for The Bachelor. Even more surprising: Kendall actually follows it and tells Arie that she is in deep like with him.

“I’m in Weiner!” Arie says as he hugs Tia, who welcomes him to Arkansas with a full-body hug and kiss. Is Weiner, Arkansas a good place to fall in love? Let’s find out: To make sure Arie has a good time, she takes him race car driving. Then she takes him to meet her family and her brother takes Arie outside and demands that he prove he’s not a “playboy” and “kissing bandit” like it said on the internet. Arie assures him that nothing on the internet is true and that he loves a “strong Southern woman.” That seems to be sufficient for the brother. Later Tia’s dad promises that if Arie hurts his little girl, he will find him — on Google. (Is that the plot of Taken 4?) Tia tells her mom that she told Arie she was falling for him and her mother nods and smiles politely. As they make out on the porch swing with Tia’s family inside, Arie apologizes that he can’t tell her all of his feelings, but promises that they are real. Tia falls for it and later says that she is in love with Arie.

Instead of taking Arie to Paisley Park like a good tour guide, Becca takes him apple picking in the freezing cold. Becca apologizes for the weather and Arie solemnly accepts her apology and, good grief, these two deserve each other. They pick apples, catapult apples, and eat caramel apples and other wholesome activities. Cut to Becca’s family talking trash about Arie. Since her father passed, Becca’s uncle, who is a pastor, is there to serve as Becca’s “guard dog.” He grills Arie about his intention and then Arie claims that he is open to going to church if that will end this conversation. Becca isn’t having much better luck. When she asks her mom if she would be open to the courtship ending in an engagement, her mom replies, “No.” Becca blinks a few times while telepathically trying to tell her mom that she is like, so embarrassing her right now. Arie then charms her mother, but no one seems convinced except Becca.

In Italy, Arie told Lauren B. that he was falling in love with her and she said, “same” or something. To prove their love, they recreate the cover of a romance novel and hold hands while riding horses on the beach in Virginia Beach. Later, Lauren warns Arie that unlike every other hometown date he has been on on her family is going to be protective of her and skeptical about their relationship. Has Lauren never seen The Bachelor before? Lauren then takes Arie home to her blonde family to sit around their beige living room and stare at each other in silent contemplation of how they ended up here. It’s an awkward dinner filled with uncomfortable silences, like when Lauren’s dad asks if Arie knows any military families and he says nope and then silence engulfs them. Eventually Arie can’t take it anymore. He slips out to have a make-up artist powder his nose, because he is giving himself the face sweats.

He finally scores some points with Lauren’s dad by casually mentioning a goodwill tour he went on in Iraq. Arie then tells Lauren’s mom that he’s falling in love with her daughter and her mother laughs, and says that he says that to all the ladies’ mothers — which he does. Lauren’s parents demur when Arie asks if he can have their blessing, but they seem to like him as much as anyone can like non-fat plain yogurt.

Kendall, Becca, Tia, and Lauren B all return to the Bachelor mansion for another Rose Ceremony. They all take a moment to express their love for Arie and the fact that they want to marry him so hard and the three other women need to go away already. Arie shows up and whines to Chris Harrison about how hard this all is for him while the women all stand there in heels for three hours waiting for him to make up his mind. Arie decides that he can’t make up his mind without speaking to Kendall alone. Arie wants to know if Kendall is ready to be engaged at the end of the show. She is too analytical and logical and honest to pretend that she could get engaged to a a guy she has never been on a date with. She starts to cry and Arie takes her back inside. He hands a rose to Becca, tosses one to Lauren B. , and then Chris Harrison points out the obvious fact that there is only one rose left. Arie hands it to Kendall. Tia is devastated. Not as devastated as Arie will be when Tia’s dad finds him on the Google, though. 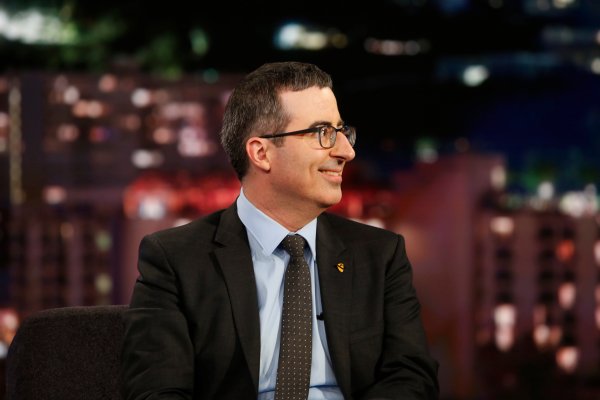 John Oliver Says It Is Trump vs. the World on Last Week Tonight
Next Up: Editor's Pick