U.S. players celebrate after the women's ice hockey semifinal game between the United States and Finland during the Pyeongchang 2018 Winter Olympic Games at the Gangneung Hockey Centre in Gangneung on Feb. 19, 2018.
Jung Yeon-Je—AFP/Getty Images
By Sean Gregory/Gangneung

As expected, the United States women’s hockey team defeated Finland, with ease, on Monday afternoon at the 2018 PyeongChang Olympic tournament semifinals in. The 5-0 win pushes the U.S. into the gold medal game. Let me speak for all Americans when I say … Whew.

If Finland had upset the Americans — and a Finland victory would have been a monumental upset — panic would have swept the nation. Enraged fans would have lit sticks (hockey) and stones (curling) on fire.

Yes, the great Olympic meltdown of 2018 would have been all but complete. But don’t go berserk quite yet. The U.S. women’s hockey team is here to save us.

You may have heard that Team USA hasn’t exactly been rocking the Olympic medal count. As of late Sunday in the U.S., the Americans were tied for sixth in the total medals standings, with 10, a full 16 pieces of hardware behind medals leader Norway. Sure, Norway’s a cross-country skiing factory, and a general winter wonderland. But Norway’s up by like seven touchdowns in the third quarter.

Even a Norwegian freestyle skier, Oystein Bratten, won the slopestyle event on Sunday. X-Games-style events like extreme skiing were pretty much invented to pad the American medal count. The Americans swept the slopestyle podium in Sochi, and won just a silver here.

For context, Team USA won 28 medals four years ago in Sochi, to Norway’s 26. The measly totals in PyeongChang are particularly embarrassing because the U.S. sent the largest Winter Olympic team in history — 242 athletes strong — to South Korea.

But don’t panic quite yet. While the American women’s hockey team won’t make up the medal difference singlehanded, its pursuit of a first hockey gold in two decades is something worth cheering for. In the semi’s, the American onslaught started early, when Gigi Marvin, on an assist from captain Meghan Duggan, scored just over two minutes into the game. Later in the period, Dani Cameransi picked off a pass and fired an unassisted shot past Finnish goaltender Noora Raty to give the Americans a 2-0 lead.

In the second period Jocelyn Lamoureux-Davidson — who scored two goals in six seconds against the Olympic Athletes from Russia (OAR) during round-robin play — put the Americans up 3-0 when she fired a slap shot into the net while the Americans held a 5-on-3 advantage on the ice. And as in the Russia game, Team USA came back with a quick goal, though it was Hilary Knight who joined the fray: Knight scored 34 seconds later on a power play to effectively clinch it. “You had to have a gold-medal mentality today,” says U.S. coach Robb Stauber. “There’s no way you can go out there and do what we did if your foot’s not on the gas. We did things right from start to finish.”

The win sets up a showdown for Team USA against arch-rival Canada, winner of every Olympic tournament since the 2002 Salt Lake City Games, in Thursday’s gold medal duel. The Canadian women haven’t lost an Olympic hockey game in 20 years, since Feb. 17, 1998 in Nagano, when the Americans won 3-1 and took the first-ever Olympic women’s tournament.

Other American athletes could still win Olympic gold. Skier Lindsey Vonn will race in the downhill event on Wednesday and is a strong contender to reprise the gold she won in the event in Vancouver in 2010. Mikaela Shiffrin — already one of five American gold medalists with her giant slalom win last week — is a favorite in the combined (slalom and downhill) event, which is scheduled for Friday. Americans could also grab gold in women’s and men’s halfpipe skiing; Maddie Bowman and David Wise are the defending champs in those events. Medals in bobsled and ice dancing are also a possibility.

Read More: Why the USA vs. Canada Women’s Hockey Rivalry Isn’t Over Yet in PyeongChang

Still, a women’s hockey gold medal would just feel better than the others. Canada beat the U.S. 2-1 in a preliminary round contest; players like Duggan and Knight and Lamoureux-Davidson have lost two straight gold medal games to Canada. The Sochi defeat is still bitter. In that gold medal game, the American blew a late 2-0 lead and lost in overtime 3-2. These American players leave little doubt that they’re seeking vengeance. “Everything’s at stake,” Duggan said before the Olympics even started.

Though the four straight snowboarding golds the Americans won in the first week of the Games — by Red Gerard, Jamie Anderson, Chloe Kim and Shaun White on successive days — were at times electrifying, another win outsides the extreme genre would be nice. Speedskating, for example, has been a bust. The American men have come up empty in alpine skiing, and Shiffrin missed the podium in slalom, her best event.

A hockey win over a tough opponent adds an extra sweetener. We celebrate rivalry victories in hockey like no other. But the Russian men’s hockey team crushed the U.S. 4-0 in a preliminary round game. The men’s team begins its elimination games on Tuesday. The U.S. men are still in the mix, but haven’t looked all that strong.

So hockey hopes fall on the women. Some of the players have had casual conversations about their country’s under-performance at these Olympics with their teammates. But they’re not using it as some sort of rallying cry. Let’s Do It For Those Suffering American Fans! “We’re at the Olympics, there’s enough pressure as it is,” says Monique Lamoureux-Morando, Jocelyn’s twin sister, and another veteran of those two straight gold medal game losses to Canada. But Stauber, the team’s coach, and his players are not blind to reality. “At the of the day, we have very proud players,” he says. “We can feel that we have a lot of people pulling for us. There’s nothing we’d love more than to deliver what they’re pulling for.”

A panicked America would be grateful. 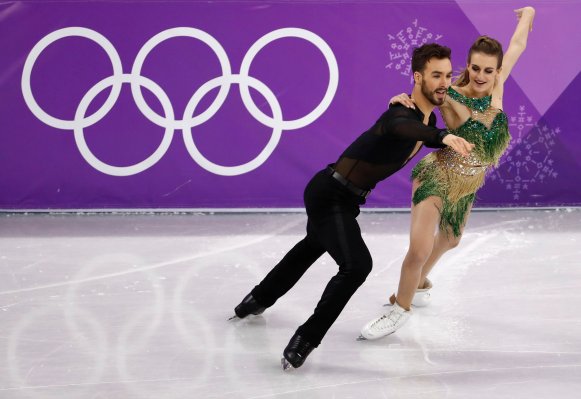