John Oliver Says It Is Trump vs. the World on Last Week Tonight

To kick off the new season of Last Week Tonight, John Oliver looked at President Donald Trump’s foreign policy, which may be little more than repeating the phrase “America First” over and over again. While Oliver notes that some people around the world may think that America’s policy has always been America First, Oliver argues that Trump’s take on it — and calling countries “sh*tholes” — is causing America’s reputation to suffer around the world.

According to Oliver, Trump’s statements on the world stage have caused America’s global median approval to sink so low that Oliver says it is the equivalent of “replacing Gal Gadot in the Wonder Woman franchise with Matt Lauer.” Per Oliver, America is losing what foreign policy wonks call “soft power,” which Oliver defines as part of a “country’s brand” derived from everything from diplomatic gestures to pop culture. However, according to Oliver, Trump has shown little interest in America’s soft power, because in his own words: “I’m the only one that matters.” Trump and his “America First” mantra are making the U.S.’s traditional allies leery of relying on the United States and creating a leadership void around the world. While Germany could fill the leadership vacuum, as Oliver points out, “They’re still in time out.”

Oliver, though, wants to help America retain it’s reputation. As a self-described immigrant who has fallen in love with this country, on Sunday night’s episode, Oliver took on the role of ambassador to assure the global audience that, “Donald Trump does not reflect America.” To prove that “Trump is the worst of us, but he’s not all of us,” Oliver threw a parade starring the best and the worst that America has to offer. He included everything from inflatable T-Rex costumes to Star Wars and Scientology to Mountain Dew to New York’s Gay Men’s Chorus singing Smashmouth’s “All Star” while Oliver climbed into a bed shaped like a Batmobile, all to prove that America is still America. 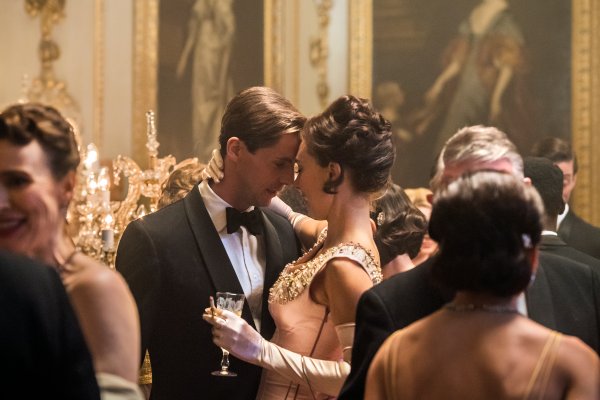 20 TV Shows to Watch After You've Finished The Crown
Next Up: Editor's Pick