A rally held on Saturday, days after a deadly school shooting in Parkland, Fla., drew a crowd of thousands and prompted impassioned pleas for gun control.

The rally was held in front of the federal courthouse in Fort Lauderdale, about 25 miles from Parkland’s Marjory Stoneman Douglas High School, where 17 people died in Wednesday’s shooting. Among the thousands who gathered on Saturday were students from the school, some of whom took to the podium to demand better gun control policies, the Associated Press reports.

Emma Gonzalez, a student at Marjory Stoneman Douglas, directly addressed President Donald Trump and other lawmakers in her speech. “If the president wants to come up to me and tell me to my face that it was a terrible tragedy and how it should never have happened and maintain telling us how nothing is going to be done about it, I’m going to happily ask him how much money he received from the National Rifle Association,” Gonzalez said.

“We need to pay attention to the fact that this isn’t just a mental health issue,” Gonzalez added. “He wouldn’t have hurt that many students with a knife.”

Fellow student Delaney Tarr also took to the stage to call for more comprehensive gun control. “Because of these gun laws, people that I know, people that I love, have died, and I will never be able to see them again,” she said.

Students from the high school have been exceedingly vocal in the aftermath of the shooting, with many demanding action from lawmakers on gun control and other safety issues.

“I think it’s great that they’re saying ‘thoughts and prayers,’ but it doesn’t do anything. And after every single shooting that’s what they say over and over again, but nothing ever changes,” Carly Novell, a 17-year-old student at the school, told TIME on Friday. “It has to be political because this happened because of guns, this happened because of the relaxed gun laws that we have.”

Vice President Mike Pence said during a speech Saturday that the Trump administration will make school safety a priority, but did not go into specifics, AP reports. 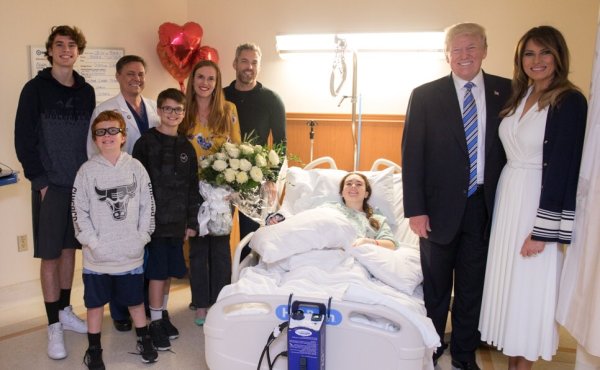 Trump Visits Victims of the Parkland School Shooting
Next Up: Editor's Pick