Trump Visits Victims of the Parkland School Shooting in the Hospital

President Donald Trump traveled to Broward County, Fla., on Friday to visit with victims who were injured in the grisly school shooting in Parkland this week.

A series of images posted on Instagram shows the president and First Lady Melania Trump, who were scheduled to be at Trump’s Florida resort Mar-a-Lago this weekend, speaking with victims and their families at the hospital and posing with medical staff.

“Our entire Nation, with one heavy heart, continues to pray for the victims and their families in Parkland, Florida,” reads a lengthy caption accompanying the post.

The pair also used the trip to meet with local law enforcement officials, in an effort to “learn everything we can” and “secure our schools, and tackle the difficult issue of mental health,” according to the post. Trump, who earlier called the alleged shooter “mentally disturbed” in a tweet, also promised to “tackle” mental health in his remarks to the nation Thursday.

Students from Marjory Stoneman Douglas High School have been notably outspoken in the wake of the tragedy, with many tweeting at Trump and other lawmakers to call for better gun control. One student told the Daily Beast that he did not want the president to visit Parkland “at all.” 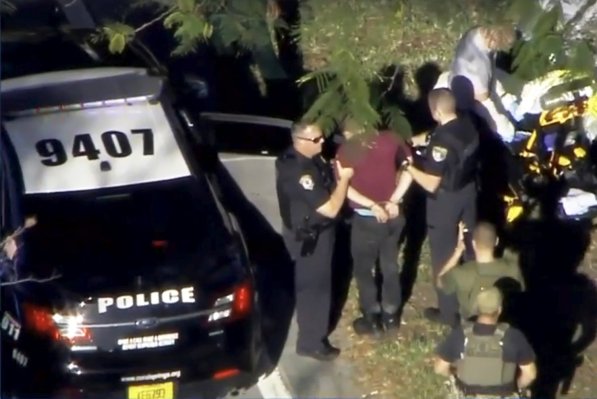 Parkland, Florida Shooting: A Timeline From the Attack to the Arrest
Next Up: Editor's Pick