What We Can Still Learn From the Women's Suffrage Statue at the U.S. Capitol Rotunda

Mid-February is jammed with holidays. Valentine’s Day, Chinese New Year and Presidents’ Day, which marks the birthdays of Abraham Lincoln (February 12) and George Washington (February 22). Between these two birthdays is February 15, the anniversary of the birth of another great American, Susan B. Anthony. Although it is not a federal holiday, the states of Florida, California, Wisconsin and New York celebrate Susan B. Anthony Day and it has been commemorated with fervor and fanfare at some places, such as Washington, D.C., for more than a century.

In 1900, at her 80th birthday party at the Corcoran Art Gallery in D.C., Anthony was seated in a queen’s chair at the head of a receiving line. For three hours, she shook hands with thousands who amassed to extend congratulations. “There never has been before,” an observer wrote, “and, in the nature of things, there can never be again, a personal celebration having the significance [in] relation to the woman suffrage movement that marked the celebration of Miss Anthony’s eightieth birthday, February 15.”

After greeting Anthony, the crowds made a pilgrimage to the marble portrait busts of Anthony, Elizabeth Cady Stanton and Lucretia Mott displayed in the gallery. Six years later, on Feb. 15, 1906, the portrait bust of Susan B. Anthony was accepted by the Metropolitan Museum of Art of New York City. Adelaide Johnson, sculptor of the bust, considered it “a crowning achievement” since institutions almost never accepted portraits of a living person as part of their permanent collections. The location also pleased Johnson; “in symbolic recognition of where she [Anthony] belongs,” the marble bust stood “at the head of the grand stairway as if to greet the visiting throngs.”

Less than a month later, on March 13, 1906, Anthony passed away, but suffragists continued to mark her birthday.

The 100-year anniversary of Anthony’s birth was again celebrated at her marble likeness in the Metropolitan Museum of Art. The centennial event, attended by sculptress Adelaide Johnson and a few friends, turned out to be rather modest. But the next year it was a gloriously spectacular celebration. In August of 1920, the 19th Amendment—known as the Anthony Amendment—was ratified, giving women the right to vote, and Johnson was sculpting a suffrage masterpiece.

On Feb. 15, 1921, the 101st birthday of Susan B. Anthony, the Woman Suffrage Statue (formally named the Portrait Monument to Lucretia Mott, Elizabeth Cady Stanton, and Susan B. Anthony) was unveiled in the Rotunda of the United States Capitol before a gathering of more than 1,000 women. The Washington Star News proclaimed, “The final chapter in the history of their long struggle for political equality was written last night by the women of America.”

While the papers espoused the idea of women’s equality, the monument that symbolized their inclusion in government was being subordinated. The day after the unveiling celebration, the statue was moved out of the Rotunda and down to the Crypt on the first floor of the Capitol. A few months later, the inscription was erased from the artwork. Despite repeated appeals to Congress over the next seven decades, the inscription was not restored nor was the monument relocated to the Rotunda. However, in 1935, Congress did give Susan B. Anthony a birthday present. “Congress honored Susan B. Anthony by washing her statue on her 115th birthday,” reported Ruby Black, “but left it in the basement.”

Year after year, women gathered in the Crypt at the Portrait Monument on February 15 to pay tribute to Susan B. Anthony. They also tried to honor her in other ways, such as asking for her portrait on Mount Rushmore as it was being carved in the 1930s. Although advocates failed in that effort, they succeeded in their campaign for the government’s issue of the 3-cent Anthony memorial stamp in 1936. Women’s groups also lobbied for February 15 to be proclaimed Susan B. Anthony Day. Governors of several states announced a commemoration each year, but most resisted making it an official annual holiday.

Through the 1930s to the 1970s, as women and men rallied for the passage and ratification of the Equal Rights Amendment, it was recognized that suffrage represented only one milestone — the goal of the woman’s movement had always been human rights. Susan B. Anthony became the “Magnificent Maiden Mother of Equal Rights” and the Portrait Monument became the statue of the Equal Rights Pioneers.

By the end of the 20th century, the ERA was not ratified, but Congress finally had approved the relocation of the statue of Anthony, Stanton and Mott. In 1997, after years of negotiations and setbacks, and the necessity of raising $75,000 in private funds, the Portrait Monument was squeezed up a stairway and rolled through the hallway to its new home. Susan B. Anthony now stood with her peers, the outstanding leaders in our nation’s history, in the Rotunda of the U.S. Capitol.

With that promotion came deliberation of Anthony’s worthiness. Some argue that the contributions of other women are ignored or demoted in favor of hero worship for this one white woman. I strongly support the study and promotion of all women and have spent most of my life researching and celebrating the lives of women considered ordinary, extraordinary, or otherwise. This work does not preclude praise for the premier leaders.

There is no need for divisiveness; there is still plenty to explore and learn about all of these women. As the jagged marble in the Portrait Monument illustrates, we have lots of unfinished work.

Has Susan B. Anthony been fully recognized? Has she been analyzed and praised and commemorated as much as Washington or Lincoln? As the general of a bloodless battle for human rights on behalf of 50% of its citizens, is she not of equal merit?

February 15 should be a day of national commemoration. And ratification of the Equal Rights Amendment would be the proverbial sweet, chocolate fudge frosting on Susan B. Anthony’s birthday cake. 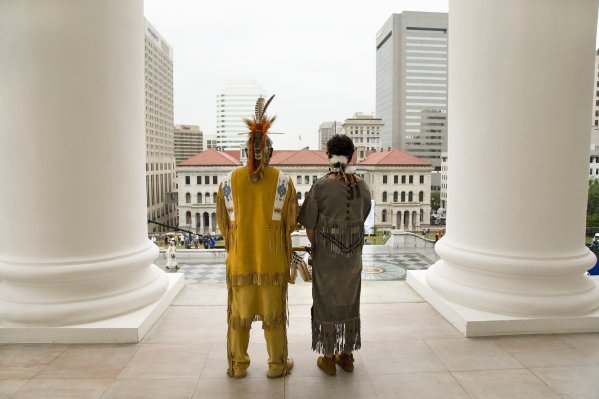 From the ‘Pocahontas Exception’ to a ‘Historical Wrong’: The Hidden Cost of Formal Recognition for American Indian Tribes
Next Up: Editor's Pick