Nikolas Cruz, 19, a former student at Marjory Stoneman Douglas High School in Parkland, Florida, where he allegedly killed 17 people, is seen on a closed circuit television screen during a bond hearing in front of Broward Judge Kim Mollica at the Broward County Courthouse on February 15, 2018 in Fort Lauderdale, Florida. Mr. Cruz is possibly facing 17 counts of premeditated murder in the school shooting.
Photo by Susan Stocker—Pool/Getty Images
By Lisa Marie Segarra

The FBI has revealed it received at least two separate tips about Nikolas Cruz, the 19-year-old charged with killing 17 people at his former high school in Parkland, Florida.

The first tip came five months ago. However, the FBI said agents were unable to link the tip to Cruz at the time.

In the second tip, made six weeks ago, the bureau admitted protocol was not followed and the information was never investigated.

Here’s everything the FBI says it knew before the shooting at Marjory Stoneman Douglas High School.

The FBI said it was notified about a comment on YouTube five months ago from someone with the username “nikolas cruz.” The comment said: “I’m going to be a professional school shooter.”

Ben Bennight, a video blogger on YouTube, told CNN he reported the comment at the time, leading to an interview with agent. However, Bennight, who lives in Mississippi, told the agents he had no information about who made the comment.

“I saw the story kind of go across my news feed, but I didn’t pay a whole lot of attention to it. But when the FBI said it was the same name, the first thing that went through my mind was, “Wow, I hope you were at least watching this guy that I alerted you to months ago,'” Bennight told CNN.

FBI Special Agent Rob Lasky, during a press conference on Thursday, said agents investigated the comment, but could not make identify the person behind it.

The FBI admitted agents received a tip in January from someone who was close to Nikolas Cruz, giving information on his “gun ownership, desire to kill people, erratic behavior, and disturbing social media posts, as well as the potential of him conducting a school shooting.”

The FBI said the tip should have been assessed as “a potential threat to life” and forwarded to the Miami Field Office. This would have led to additional “investigative steps,” which were not conducted.

“We are still investigating the facts. I am committed to getting to the bottom of what happened in this particular matter, as well as reviewing our processes for responding to information that we receive from the public. It’s up to all Americans to be vigilant, and when members of the public contact us with concerns, we must act properly and quickly,” FBI Director Christopher Wray said in a statement.

Police responded to Cruz’s house 39 different times over seven years, according to documents CNN obtained. There was no information, however, on whether those calls to police were made in relation to Cruz, CNN reported. 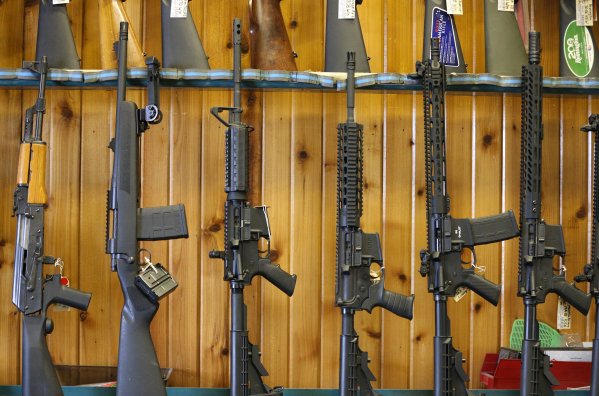 Why Americans Started Buying Military-Style Weapons Like the One Used in the Florida Shooting
Next Up: Editor's Pick