Security staffers for Environmental Protection Agency head Scott Pruitt recommended that he fly first class after several encounters with irate passengers, according to a report in Politico.

“He was approached in the airport numerous times, to the point of profanities being yelled at him and so forth,” Henry Barnet, who leads the agency’s Office of Criminal Enforcement, told the news outlet.

Pruitt has been under fire since the Washington Post reported earlier this week that he spent $1,641 on a first-class flight from Washington to new York City, more than six times the cost of the ticket for aides who rode in coach on the same flight, among other first-class trips.

He later told the New Hampshire Union Leader that the first-class tickets were because of the “very toxic environment politically” which had led to “incidents” on flights shortly after he took the Trump Administration post.

Barnet backed up that account, saying that Pruitt was subjected to profanities and threats increasingly as his public profile grew.

On one occasion, at the airport in Atlanta last October, Barnet said that a man approached Pruitt and began shouting something to the effect of “Scott Pruitt, you’re f—ing up the environment!” all while recording the encounter on his phone. 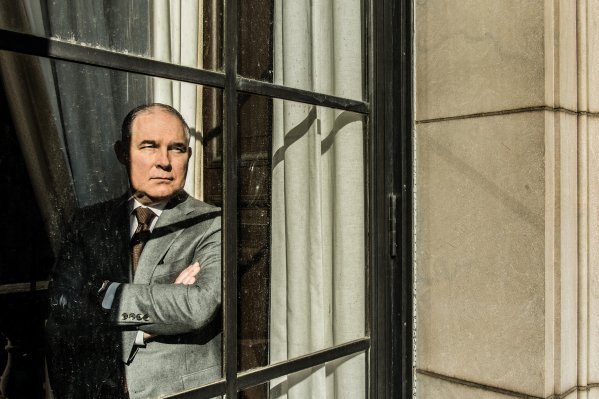 EPA Head Once Said Donald Trump Would Be 'Abusive' to the Constitution
Next Up: Editor's Pick