5 Unusual Moments in Presidential History, Picked by an Expert

On Monday, Americans celebrate the birth of George Washington, a man generally known for instilling the office of U.S. President with dignity and gravitas. But not every moment in presidential history could quite be described with those two adjectives. For Presidents’ Day, Cormac O’Brien — author of Secret Lives of the U.S. Presidents and Secret Lives of the First Ladies — picks five of the most unusual anecdotes from the more than 200-year history of the American presidency.

Jackson, the first president who didn’t hail from the Eastern establishment, began his administration with the wildest of all inaugural parties. In the years leading up to his election in 1828, many states had loosened the requirements for enfranchisement, dramatically expanding the vote. Jackson, a dueling frontier legend and war hero, represented a rejection of the elitist status quo — a populist who owed his election to the ordinary man. In the days leading up to the inauguration, folks from all over the country flocked to the capital, eager to get a glimpse at their new president. The lodging quickly filled up, and visitors took to sleeping out in the open. Washington became a campground. On March 4, 1829, Jackson took the oath of office, delivered a speech, and headed to the executive mansion for what was intended to be a dignified reception.

The masses went with him, and what followed was anything but dignified. “Country men, farmers, gentlemen, mounted and dismounted, boys, women and children, black and white, carriages, wagons all pursuing him to the President’s house,” recalled one eyewitness. Cramming recklessly into the mansion, the surge of partiers clamored to be near the man of the hour and shake his hand. Bedlam ensued as they trampled on the furniture, ground food into the carpet, drank themselves bulletproof, fought and groped each other, helped themselves to “souvenirs” and ransacked the kitchen. Jackson decamped through a window to save himself. Desperate staff members finally put the booze out on the lawn to disperse the crowd, sparing the building from further harm.

On June 2, 1886, Cleveland became the first and only president to get married in the White House. And it was a grand affair indeed: As the black-tie nuptials proceeded in the Blue Room, throngs of ordinary Americans gathered outside the mansion to get a peak at their new first lady, Frances Folsom.

She was already a national sensation. Cleveland had announced the engagement just five days earlier, ending a year-long secret (along with his bachelorhood) and galvanizing the nation’s excitement. Just 21 years old, Frances — a dark-haired beauty with a bachelor’s degree from Wells College — would become the youngest First Lady in history, and one of the most beloved. But it wasn’t just her grace or good looks or fluency in French that piqued everyone’s interest; it was also that “Uncle Cleve,” as she had long since dubbed Grover, was once her surrogate father. Indeed, the girl’s first baby carriage had been a gift from Cleveland, who practiced law with Frances’s father, Oscar. The little girl was just 11 when Oscar died in a carriage accident, at which time Cleveland stepped in as her guardian. After watching her blossom over the years into an extraordinary young woman, he eventually fell in love with his charge. That she readily accepted the proposal — and that Cleveland was 28 years her senior — made for sensational newspaper copy.

Too sensational, as far as the president was concerned. In fact, reporters were pointedly barred from the wedding ceremony. They had to wait outside with the hoi polloi. Afterward they made up for lost time by hounding the newlyweds at their Maryland honeymoon, spying on them with binoculars.

Roosevelt loved all manner of physical exertion and martial workouts, and continued to pursue them even in the White House (a moniker for the executive mansion, incidentally, that he made official by being the first to include it on presidential stationary). Boxing was a favorite. Once, while sparring with a young naval officer in the White House, he was dealt a savage blow to the face that left him blind in his left eye. Months passed before he was able to work up the courage to tell anyone about it.

JFK had dreadful back problems. For most of his adult life, and all of his presidency, the pain from a condition that several operations were helpless to fix was positively crippling. He took to receiving injections from one Max Jacobson, a.k.a. “Doctor Feel-Good,” a Hollywood quack who specialized in doping celebrities. An unofficial part of the White House circle, working independently of the administration’s medical staff, Dr. Jacobson gave weekly and sometimes daily amphetamine injections to the president, whose pharmaceutical regimen could at various times include testosterone, oral and injected steroids, sleeping pills, phenobarbital and lidocaine injections. In May 1961, Kennedy made an official state visit to Ottawa to meet with the Canadian prime minister and deliver a speech to parliament. Shortly before returning to Washington, the president participated in a seemingly innocuous tree-planting ceremony outside Government House, during which he badly aggravated his chronic condition. Arriving in Washington on crutches, he promptly upped Jacobson’s doses, convalescing for two weeks.

Just the following month, JFK flew to Vienna to take on his first great foreign policy challenge: a summit with the rebarbative premier of the Soviet Union, Nikita Khrushchev. Careening between a listless, doped-up state and debilitating discomfort, Kennedy turned in a lackluster performance. Khrushchev and his entourage concluded that the new American president was a man who could be pushed around. It was with this in mind that, before the end of the summer, the Soviets began staging nuclear missiles to Cuba, commencing the direst crisis of the Cold War.

When Reagan suffered an assassination attempt not long into his presidency, his wife Nancy determined that such a nightmare must never occur again. She promptly turned her astrology hobby into White House policy. Incredibly, the efforts of astrologer Joan Quigley (whose cover was “Joan Frisc” when calling the White House switchboard) were enlisted to determine the relative safety of every moment of the president’s schedule, from TV appearances to meetings with foreign heads of state. Quigley’s color-coded guidelines effectively determined the shape and rhythm of the Reagan presidency.

Cormac O’Brien is the author of Secret Lives on the U.S. Presidents, available from Quirk Books. 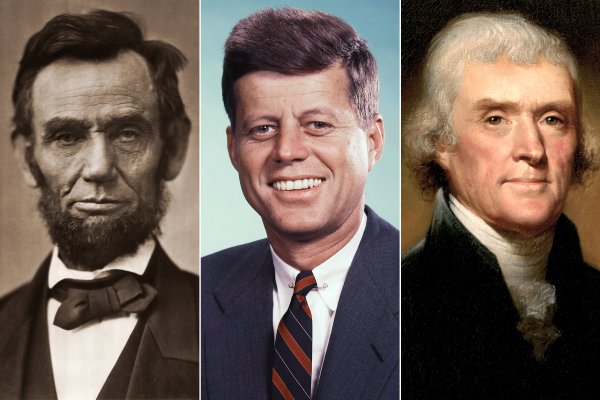 Presidents' Day Quiz: Can You Put the U.S. Presidents In Order?
Next Up: Editor's Pick