Ideas
By Chris Schleicher
Chris Schleicher was a writer for five seasons on The Mindy Project and is currently a writer and co-executive producer on Champions, premiering March 8th on NBC.

It’s been a couple days since I guided you through the pairs event, and now I’m back to let you know which men to pay attention to in the Olympic men’s free skate. The free skate, or long program, as any skater will call it, is 4 minutes and 30 seconds of grueling torture. I once had a Russian coach who told me that the long program required the same exertion as running 2 miles in four minutes. I have zero way of testing this scientifically, but it sounds about right, so let’s just treat it like it’s a fact.

The men’s event in Pyeongchang has a deep bench of amazing athletes. And like it or not, the men’s event these days is about one thing and one thing only: quadruple jumps. In a quadruple jump, a skater takes off backwards, rotates four full revolutions in the air, and lands again on one foot on a backward outside edge of a skate. A snowboarder might call it a 1440, but in skating we just count full revolutions because we’re not math nerds. While spins, step sequences, and artistry will play a significant role in who lands on the podium, the gold medal will likely come down to who does the best job of achieving their #quadgoals.

There is no joy in Pyeongchang, mighty Nathan has struck out. Almost no one had more pressure on him in the men’s event than Nathan Chen, anointed this season as a gold medal favorite and the Next Big Thing in American skating. Seemingly crumbling under the pressure, Nathan Chen’s delivered a disastrous short program, falling on a quad lutz, stepping out of a quad toe loop and putting a hand down on a triple axel. He currently sits in 17th place with no hope of a medal. It was the type of heartbreaking performance that caused me to pull a full Tyra Banks, yelling at my television, “I was rooting for you! We were all rooting for you!” I guess I’m just embarrassed because I told all my co-workers that Chen was going to win gold, much like I insisted last year that there was no way La La Land could possibly lose Best Picture and that Hillary Clinton was solidly ahead in Pennsylvania and Michigan. Point is: I’m bad at predictions, and it’s foolish of you to even continue reading.

In some ways, media darling Adam Rippon had even more pressure on him than Nathan Chen. Thrown into the spotlight as the first openly gay man to make the U.S. Winter Olympic Team, Adam Rippon had the hopes and dreams of a whole community on his back. And boy did this self-proclaimed “glamazon” deliver, landing a triple axel, triple lutz, and a triple-flip-triple-toe combination in a deliciously flirty short program to the clubby sounds of Ida Corr’s “Let Me Think About It.” Rippon’s triumphant step sequence made me jump to my feet; it’s a exuberantly gag-worthy, wig-snatching, 200-foot pride march across the ice. Because Rippon didn’t attempt any quadruple jumps, he was only able to accumulate enough points to land in 7th place. It’s going to take a lot of help for Rippon to get into bronze position, but who knows, as he once said in an interview, “I’m like a witch, and you can’t kill me. I keep coming back every year and every year I get better.” In the free skate, Rippon will be performing the same Coldplay program that he nailed in the team event, but unless his witchcraft is able to cause some major mistakes at the top of the pack, the podium is going to be difficult to reach. That won’t stop Rippon from trying though. You betta work, witch!

Many people believed 17-year-old Vincent Zhou was named to the Olympic team to build future talent; Pyeongchang would help him get his feet wet so he could be a seasoned Olympian by the time the 2022 Beijing Games rolled around. But Vincent came to play in these Games too. Vincent skated in the first group in the short program, what I call the “kids table” of the event, but he announced his arrival with a true big-boy element, the quad lutz. In landing that jump, Zhou became the first ever man to complete a clean quad lutz at the Olympics. He still has some work to do in building a connection with the audience, he’s definitely a rising star to watch.

Yuzuru Hanyu very well may be the greatest figure skater of all-time. The 2014 Olympic champion sits in first place after the short program, landing two quads on his way to the second highest short program score ever recorded (the only higher score was also performed by Hanyu). Quelling fears that an ankle injury might have dimmed his chances for gold, Hanyu completed a short program that was absolutely note-perfect in both technical content and artistic presentation. Not a moment was wasted in his skate to Chopin’s “Ballade No. 1,” which ended the only way it possibly could, with a blinding rain of Winnie-the-Pooh stuffed animals descending on the ice, like a Disney-sponsored Biblical plague. Hanyu’s recently-recovered ankle will be put to the test in the long program, where he will be attempting far more jumping passes than in the short. He will be cheered on by hordes of supporters, who have made Yuzuru a megastar celebrity in Japan. His fans have been known to weep in the audience when he doesn’t perform well, so while I want Hanyu to succeed because he is an amazing skater, I also want him to win to protect the stadium from being washed away by his fans’ tears.

While Yuzuru Hanyu might be the best skater in the men’s event, six-time European Champion Javier Fernandez is unquestionably my favorite skater. And yes, part of that is because he looks like a cross between young Antonio Banderas and Prince Eric from The Little Mermaid. But also, Fernandez is both an amazing technician on the ice and one of the few genuinely funny ice skaters in the world (if you haven’t seen his aerobics themed exhibition program, run to YouTube). There can be a sort of stultifying sameness in the beautiful choreography and lilting music chosen for figure skating, so when a full-on cornball like Javier Fernandez bursts onto the ice with a Charlie Chaplin program, I am so incredibly here for it. It’s nice to see a skater attempting to make the audience smile rather than ache for once. Javier landed two quadruple jumps on his way to a second place finish in the short program, right behind his training partner Yuzuru Hanyu. Fernandez narrowly missed a bronze medal in Sochi, and plans to retire after this Olympics, so it’s now or never for this Spaniard to pick up the first-ever Olympic figure skating medal for his home country. As he chases this highly possible dream in his Man of La Mancha long program, Javi needs to skate like there’s no mañana.

Shoma Uno of Japan is in third place after a clean skate to Vivaldi’s “Winter.” Shoma was the silver medalist at last year’s World Championships, where he was narrowly defeated by, you guessed it, Yuzuru Hanyu. In any other era, Shoma Uno would be the undisputed skating star of Japan, but just because he happens to exist at the same time as an all-time great, it’s stopped him from receiving all the recognition he deserves. I guess what I’m trying to say is: Shoma Uno is the Glenn Close to Yuzuru Hanyu’s Meryl Streep. Expect some powerhouse quads in Uno’s long program to “Nessun Dorma,” an overused musical masterpiece that is basically a cheat code for getting the audience on their feet. Listen, I’ve got no problem with using worn-out classics; I once skated to Carmen and Swan Lake in the same season, but just once, I’d like someone to mix it up and skate to the Aretha Franklin version of “Nessun Dorma.”

China’s Jin Boyang landed in fourth place after his Crouching Tiger, Hidden Dragon short program. His jumps, including a quad-lutz-triple-toe combination were impeccable, but his rather basic presentation left something to be desired. It’s a testament to how de rigueur quadruple jumps have become in men’s skating that I can now watch a program with two quads and think, “Yes, but why should I care?” Watch out for this jumping machine in the long program; he was the first skater to land six quads in international competition. Skating to a Star Wars medley in the long program, Jin Boyang represents a new hope for China in the men’s event, a discipline where they have traditionally struggled.

Dmitri Aliev is the reason that your coach tells you not to watch your competitors skate before you go on the ice. If I had seen the gorgeous quad-lutz-triple-toe combination he landed while I was waiting my turn to skate, I would have pulled an Anna Karenina under an oncoming Zamboni machine. Aliev’s ability to pull off high-scoring combinations with classically balletic Russian technique makes him a dark horse threat for a medal, even though he currently sits in 5th place.

With a host of world-class talents only separated by a few points, the men’s event is going to come down to whoever can skate clean in the long program. Missing one element could mean the difference between gold and no-medal-at-all. It’s been a while since I’ve set foot on the ice, but I’m feeling inspired by all the quads last tonight, so I’m thinking about hitting the rink tomorrow. If, as I predict, I shatter into a million pieces attempting a mere double jump, tell Javier Fernandez that I loved him. Enjoy the free skate! 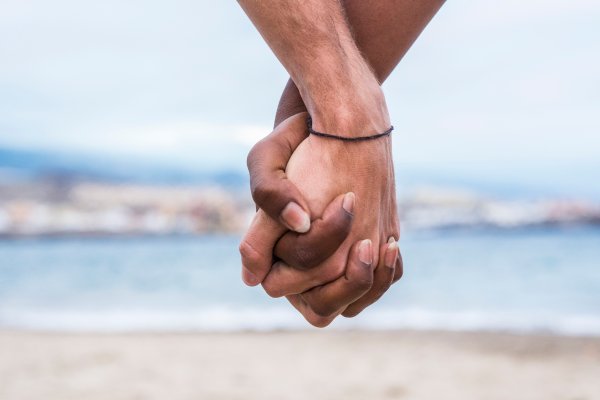 Science Might Hold the Secret to Love That Lasts
Next Up: Editor's Pick